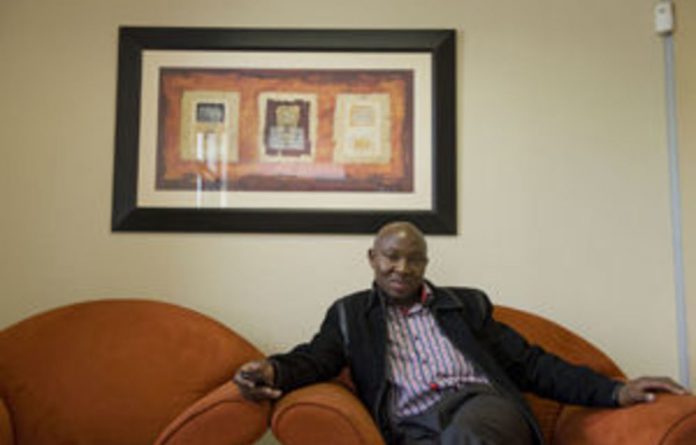 The past few weeks have not been easy for Thobile Ntola, president of Cosatu’s teacher union, Sadtu. Nothing has tested his leadership more since his election in 2008 than the 20-day public service strike and its aftermath. He dealt in turn with strike violence, pressure from his ANC comrades to find a solution to the wage impasse and angry delegates at last week’s chaotic Sadtu conference, who booed senior ANC leaders.

But for Ntola these challenges are merely part of being a revolutionary, committed to bettering the lives of the working classes.
Re-elected to his position last week, the Eastern Cape-born Ntola showed no sign of strain when he met the Mail & Guardian on Wednesday.

“It is business as usual,” said the radical but softly spoken leader. He was between meetings of the bargaining council, where 19 public-service union leaders were deciding whether to agree to government’s offer of a 7,5% salary increase and a R800 housing allowance.

Other Cosatu affiliates were saying yes; Ntola, no.

Despite condemnation from the government, the ANC and opposition parties of the conduct of striking public servants Ntola appeared unfazed.

Sadtu did everything in its power to avoid the strike, he said.

“A strike is not always the right mechanism. For us, strike action is always the last option. But in this case the employer pushed us too far.”

Government had failed to convince members that it had no money to pay for salary increases, he said.

‘There is a view among workers that what the government budgets for is often not a priority. Members failed to understand why government budgeted millions of rand to pay for the Gautrain, for instance.

“Can we say the arms deal was a priority when we are moving towards a more civil society? How do you justify the building of a parking area at King Shaka airport valued at more than R60-million?

“How do you justify the fact that Cabinet ministers always stay in expensive hotels, drive luxury cars and are always taking overseas trips? [Planning Commission Minister] Trevor Manuel recently revealed that the government spent about R4,5-billion a year on things like advertisements.

“How do you explain all this to workers who are still struggling to make ends meet?” Ntola asked.

He defended Sadtu members who booed ANC secretary general Gwede Mantashe last week when he said the children of some striking teachers attended former Model C schools and continued learning during the strike.

“The manner in which Mantashe raised [that] was uncalled for,” he said. “He was dealing with delegates on their own platform. Teachers have the right to send their kids there [Model C schools].”

Ntola apologised to Mantashe and the ANC for the behaviour of Sadtu members, but political observers believe he carries some blame because of his frequently incendiary rhetoric.

At the congress he blasted President Jacob Zuma, his administration and the ANC for making empty promises to the poor.

“A better life for the people of South Africa still remains a public-relations stance,” Ntola said to thunderous applause.

“Post-Polokwane, state power is still used to distribute patronage and appoint people without capacity to lead transformation, [for] corruption and nepotism, for accumulation of wealth, especially through government tenders. We are an irritation to the current administration. This is seen through its militarisation of police to deal with us when we are exercising our rights, media tribunal proposals, classification and declassification of information.”

Some in Cosatu believe all top six ANC leaders, including Zuma and Mantashe, should be retained after the party’s 2012 elective congress, but Ntola holds a different view.

“We must analyse whether the current leaders are sympathetic to the interests of the working class,” he said, adding that no one, including Zuma, was guaranteed a future leadership position.

“This is a class struggle. We are not satisfied [with the current leadership]. We have not seen significant changes in areas such as health and education and there is no clear position on industrial policy.”

For some within the tripartite alliance Ntola is a reckless, ultra-leftist leader whose utterances send the wrong messages to foreign investors. For others, he is a working-class hero committed to improving the life of the poor.

Until recently Ntola was an unknown figure, but he has grabbed public attention during the past two months with his scathing attacks on President Jacob Zuma and other ANC leaders and his seemingly intransigent arrogance during the public service strike.

A teacher by profession, Ntola is one of the emerging and growing class of white-collar trade unionists in the country. In addition to his teaching qualifications he holds a law degree from Nelson Mandela Metropolitan University and is furthering his legal studies through Unisa.

Ntola’s active involvement in politics began in 1987 when he was elected chairperson of the student representative council at Butterworth College in the Eastern Cape. This position made him a target of the apartheid intelligence apparatus, which harassed him from time to time and forced him to leave his home in Transkei and seek refuge with a cousin in Port Elizabeth.

Ntola was re-elected Sadtu president last week and also serves as a member of the central committee of the SACP and of trade union federation Cosatu. In 2009 he was a member of the ANC’s education and health commission.

Unlike many Cosatu leaders Ntola says he does not dream of a top government post. “I have no ambition to become part of the bureaucracy,” he told the Mail & Guardian. “My ambition is to work for the people to ensure they are liberated. If need be, I would retire in the trade union movement.”

A hardline SACP member, Ntola believes socialism offers the only way to address South Africa’s high levels of poverty and unemployment. And, the SACP, not the ANC, is the party to deliver it, he says.

Last week Sadtu took a resolution to give financial support to the SACP to strengthen the party.