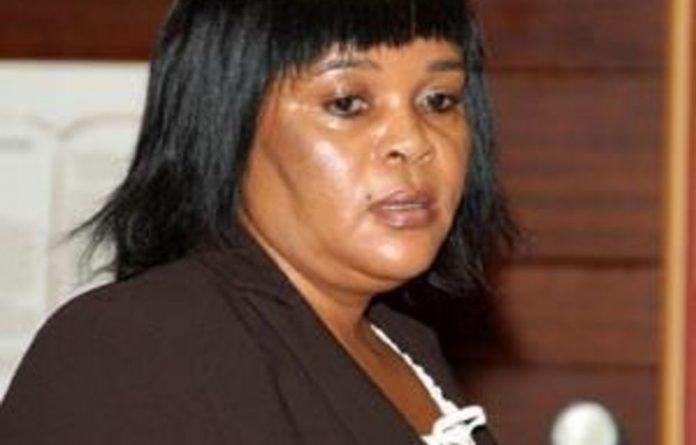 The plodding drug-trafficking trial of Sheryl Cwele — wife of State Security Minister Siyabonga Cwele — and her co-accused, Frank Nabolisa, was given an air of glamour on Monday as two of the three Brazilian witnesses for the prosecution took to the witness stand in the Pietermaritzburg High Court.

Cwele faces, together with her co-accused, one count of dealing in dangerous dependence-creating drugs or conspiring to do so, and two counts of incitement to dealing in dangerous dependence-creating drugs. The latter related to allegedly recruiting Tessa Beetge, who is serving an almost eight-year prison sentence in Brazil and Charmaine Moss, another state witness, to traffic cocaine.

And all eyes — especially male ones — in the court room appeared trained on Brazilian chemical expert, Carolina Braga, who was first to take the stand. This was undoubtedly a welcome reprieve for regular court watchers who were becoming increasingly bored with the slow-paced nature of the trial: exacerbated by the translation — usually inept — required for four different languages, including Portuguese, Igbo, isiZulu and Afrikaans.

Braga, who has a master’s degree in chemical engineering and has tested chemical substances for the Brazilian Federal Police and the army for the past six years, initially outlined the procedure followed in the event of an arrest of someone for allegedly carrying an illegal substance.

Braga testified that the samples from the packages of cocaine found in the possession of Tessa Beetge at São Paulo Airport on June 13 2008 had tested as cocaine.

Said Bartole: “I passed the luggage through the X-Ray machine and I detected something organic inside it. Because of that, I checked the name of the passenger on the ticket attached to the luggage and on that ticket I established the name of Tessa Beetge.”

Bartole said that he also established through the luggage ticket that the owner of the piece of luggage had travelled from Peru to Brazil and was en route to South Africa. He then tracked down Beetge in the boarding area of the airport.

No surprise
After confirming that Beetge was indeed the owner of the piece of luggage, Bartole said that he, in the presence of Beetge and “another witness who was not a police officer, I opened the suitcase”.

Bartole said inside the suitcase he found another, smaller bag: “We opened it and found a parcel of white powder. With my experience I believed it was cocaine and because of that I asked everyone present to go to the police station.”

Bartole said the cocaine had been found in three packages rolled in carbon paper, together with cocaine in four packets of coffee and sweets. “We did open all the packets and all of them had the same substance. We then put all the substances together and called an expert to weigh it,” said Bartole. The substances weighed close to 10kg and samples were sent for further testing, said Bartole.

“After that the accused was informed that she was under arrest because of the crime she had committed,” he added.

On being quizzed by the Judge Piet Koen, Bartole said Beetge had not expressed surprise during the examination of the alleged cocaine or on notification of her arrest.