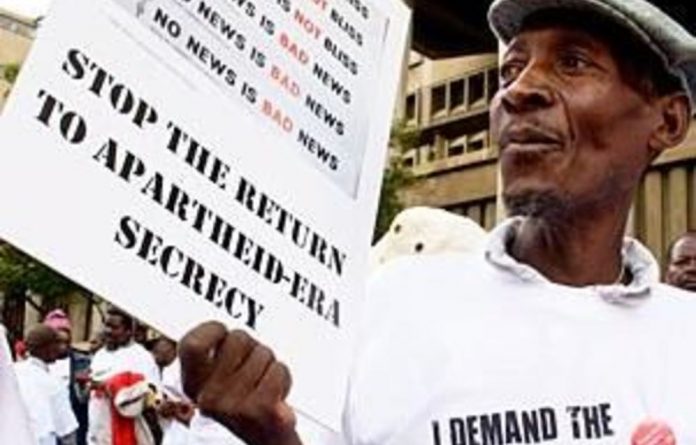 The issue of media freedom moved squarely into the global limelight this week, with a steep drop in the country’s global press-freedom ranking and a high-level acknowledgement by internationally renowned individuals of the media’s struggle to maintain its independence.

The country dropped five places to 38th position in the Reporters Without Borders annual Press Freedom Index, published this week.

South Africa’s drop in the respected rankings is partly blamed on attacks on journalists around the time of the 2010 Soccer World Cup, but mostly on “the behaviour of senior members of the African National Congress towards the press”.

The report published with the index makes special mention of the April 8 incident in which ANC Youth League leader Julius Malema expelled BBC correspondent Jonah Fisher from a news conference, calling Fisher a “bastard” and “bloody agent” when he questioned Malema about his upmarket home in Sandton.

The report attributes the ranking drop to “the government’s plans to create a media tribunal and to pass a Bill restricting the disclosure of information”, referring to the ANC’s proposed Protection of Information Bill.

Topping the press freedom list is Finland, followed by Iceland and The Netherlands. Only two African countries, Ghana and Mali, made it into the top 30. Iran, Turkmenistan, North Korea and Eritrea are ranked last.

Africa continues to be one of the most difficult continents for independent media, with the murder of two journalists in Uganda last month.

In Cameroon, which dropped 20 spots, a newspaper editor died in prison this year and two other editors remain in detention. In Côte d’Ivoire, at 118th place, newspapers have been harassed and there was a temporary ban on the local transmission of a French television station. Zimbabwe is ranked 123rd and the Democratic Republic of Congo 148th.

South Africa’s struggle
But South Africa’s struggle to maintain media freedom is increasingly being recognised by respected names. In September Per Wastberg, the Swedish author and chairperson of the Nobel Prize Committee for Literature, signed a petition that was sent to the Presidency by a group called the Writers Against the Protection of Information Bill/Media Tribunal, which is backed by South African writers Nadine Gordimer and André Brink. Wastberg signed the petition at the 2010 International Goteberg Book Fair in Sweden, with more than 150 Swedish publishers, journalists and students.

Following the petition and other letters about the issue, President Jacob Zuma released a statement saying that he “wishes to assure the media groupings that government remains fully committed to media freedom as enshrined in the Constitution. He welcomes the inputs made to the debate in the public arena and also in Parliament at the public hearings, which indicate the vibrancy of South African society.”

Last week a delegation led by Deputy President Kgalema Motlanthe met a group from the South African National Editors’ Forum for two days in the Magaliesburg. Reports on the outcome of the meeting were mixed, but Motlanthe seemed to indicate that the ANC could be willing to allow the media to continue to self-regulate if its own mechanisms could be made tighter and more effective.

The Right2Know campaign’s week of action kicked off this week with a march from Wits University to Constitution Hill in Johannesburg. It will culminate in a march to Parliament in Cape Town on Wednesday.