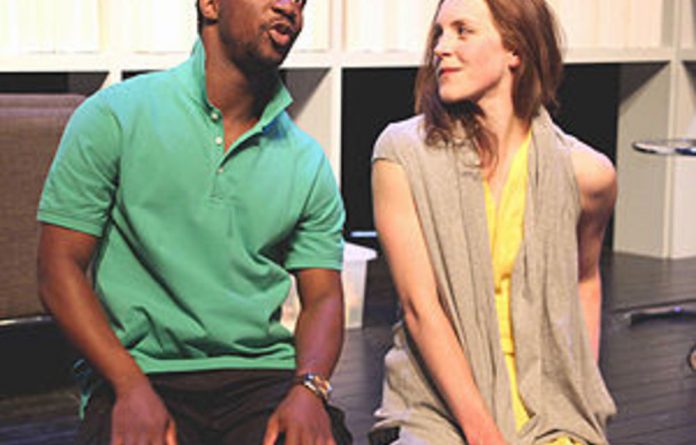 Overseas reviews of The Girl in the Yellow Dress, a new play written by Craig Higginson and directed by Malcolm Purkey, have been effusive.

The psyschosexual drama is tight and well written, but the fact that the production features an English girl working in Paris has a lot to do with its enthusiastic reception in the British Isles.

After the play’s premiere in Grahamstown, it went to Cape Town’s Baxter and then had a stint at the Edinburgh Festival in Newcastle and Glasgow before finishing in Stockholm.

In the writer’s notes Higginson (who is also a novelist, director and university lecturer) says he penned the first draft of the play while he was working as an English teacher in Paris.

“About two years ago, having returned to live and work in South Africa, I picked up the play again. I wondered how I could turn this rather private and domestic exploration of language and co-dependent relationships into a broader political allegory.”

The play is inspired by Ovid’s story, Echo and Narcissus, and other psychoanalytic writings on narcissism.

It’s principally about a student, Pierre (brilliantly played by the versatile Nat Ramabulana), who seeks out Celia, a beautiful teacher in her 20s (played by English actress Marianne Oldham).

Pierre knocks on the door of Celia’s Paris flat and he tells her he wants to learn English. Soon enough what’s clear is that this could be a pretext for something else.

It’s not always easy when a man meets a woman (and vice versa, I suppose) but the first impediment for them is race — he’s black and from the Democratic of Republic of Congo, a country that perhaps best typifies Africa’s painful and tortured history.

Celia, a rich English girl, comes from a broken home. To complicate this further the plot throws in a brother whose complexity taints the familial relationship.

The strength of The Girl in the Yellow Dress lies in its intelligent and subtle use of language and dialogue. Just beneath the verbal sparring is a vast landscape where concepts like race, truth and sex are endlessly examined.

The way the play is conceived means that, when there is rise of temperature on the beautifully crafted stage (scenographer Gary McCann has used a vast, white, zig-zag bookshelf in Celia’s apartment, perhaps adding to the fierce intellectual sense of the play), there is shelter to be found in the strictures of grammar.

In this way an emotionally loaded sentence is hastily emptied of its force by clever word play.

The beauty for the audience lies in witnessing what began as a language lesson meander and negotiate its way through territory signposted with tense rules, syntactic quibbling and grammar rules — we know what’s going on is weightier than language and we want to think we know how it will all end.

Furthermore, its textures are suffused with takes on history, race, gender and truth that many locals will find familiar.

The Girl in the Yellow Dress is a fascinating production, showing the possibilities that abound when Europe and Africa are cleverly brought together.

The complex histories we’re connected to

Author Craig Higginson and the barren fields of white guilt