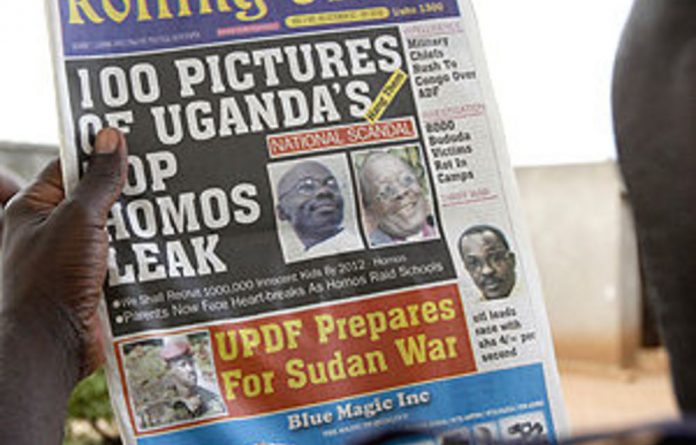 Heather Kitaka (not her real name) was in her Kampala home on October 15, listening to music, when it began.

“It started at 3pm and went on all night. People started throwing stones through my gate and shouting. My friends came and said: “Look, you have to leave; you have to get out of here.” So the next day, I left. I haven’t been back since.”

Kitaka is one of 100 people listed in an October 9 article in Uganda’s Rolling Stone newspaper, which featured a list of the country’s 100 “top” homosexuals. Across the front-page story ran a bright, yellow banner that read: “Hang them.”

At least three other people have been attacked and many more are in hiding since the publication in the two-month-old newspaper, started by journalism students.

It included the photos and addresses of many of those “named and shamed”, with claims that the country’s gay community was trying to “recruit” a million children by raiding schools and that a deadly disease causing “shattered flesh” was spreading through it.

This is not the first time that a Ugandan newspaper has ousted members of the country’s gay community.

In September 2007, the newspaper carried out a “weird sex investigation” titled “Homo terror”.

The articles and the reaction to them underscores the growing homophobia in the country, say the country’s gay community, a year after a Ugandan MP drew up a Bill in Parliament that would have imposed the death penalty for some homosexual acts and life in prison for others.

The legislation was introduced after the visit in March last year of Scott Lively, an American evangelist, and two other American fundamentalist Christians warning about “the gay agenda” and the threat homosexuals posed to the traditional African family.

The Bill has since been suspended in response to pressure from international donors, but the country’s gay community says that it has done its job of seeding prejudice in the East African nation.

“It’s getting worse. Gays were harassed before the Bill was introduced, but since its introduction it has escalated. More people are being beaten up, chased from their churches and evicted from their homes,” said Julian Onziema of the rights group Sexual Minorities Uganda (SMU).

More than 20 homosexuals have been attacked over the past year in the country, says Frank Mugisha, SMU’s chairperson, up from 10 two years ago. Another 17 are currently in prison.

Giles Muhame, the editor of Rolling Stone (which is not linked to the American title of the same name) defended the action of the newspaper as being in the public interest.

“International community and human-rights organisations say that we are inciting violence, promoting discrimination and endangering the lives of these people,” he said.

“But ordinary people praise our good work and thank us for our efforts. These people are promoting homosexuality in Uganda. They are recruiting children into a lifestyle that is against our traditional cultural beliefs.”

Many Ugandans regard homosexuality as a Western import. South Africa is the only country in Africa where gay marriage is legal.

After years of campaigning in support of gay rights, members of Uganda’s gay community say they are now scared of showing their faces in public for fear of what may happen.

Brian Nkoyooyo, the director of the gay rights group Ice Breakers Uganda, has not moved from his home since the article, in which his name and address appeared, was published.

“I’ve not been able to move around since this came out. Normally, I go out and meet friends and go into the office. Now I’m scared that people will yell at me or attack me on the street. I only go out late at night now to the 24-hour supermarket, and never on public transport.”

“Things are getting worse,” said Kitaka. “People are so scared that they’re going back into the closet. But some of us don’t have that option any more.”

Uganda’s Media Council has ordered Rolling Stone to cease operations, but only because it was not properly registered, said Paul Musaka, the secretary of the council.

Proposed legislation imposes the death penalty for gay sex or ‘recruitment’. But love is not a crime
Read more
Opinion

Learning to live my truth as a gay person

I was 22 years old before I was open about my sexuality. I hope others won’t have to wait so long
Read more
Africa

Kenyan court due to rule on decriminalising same-sex relations

However, the LGBT community fears yet another postponement
Read more
Opinion

Advertisers as allies in the struggle for LGBTIQ equality, representation, inclusion