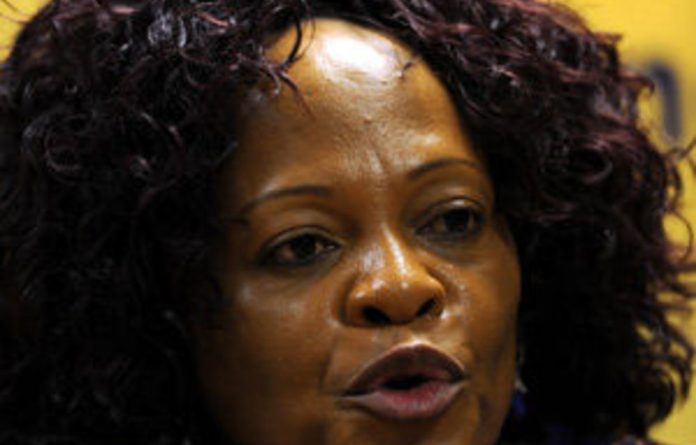 Gauteng premier Nomvula Mokonyane axed two ministers in a cabinet reshuffle on Tuesday, saying it was necessary to “kill” the perception of two centres of power in the province.

“We are all here at the behest of the ANC … [and] the ANC has new leadership in the province,” she told reporters in Johannesburg.

“The internal democratic processes of the ANC will from time to time produce other people as part of the leadership and you need to consider it.”

Mokonyane said she had to “look at the political prerogatives” in deciding about the reshuffle.

She said after the provincial elective conference in May — where her predecessor Paul Mashatile beat her to the post of provincial chairperson — new leaders had emerged in the African National Congress who needed to be accommodated.

Mashatile was promoted to Arts and Culture Minister in a Cabinet reshuffle announced by President Jacob Zuma at the weekend.

Also at the weekend, the provincial executive committee of the ANC met in Vanderbijlpark where Mokonyane reportedly opposed the idea of a reshuffle. During the meeting, committee members supplied her with names of the members they wanted on the province’s executive council.

She said there had been “consultations” since Thursday.

Balance
Asked if she would have undertaken the reshuffle if she had not been told to do so by the ANC, Mokonyane replied: “You must create a balance, so you kill what has always been perceived as two centres of power … I had to act and do things in a manner that put the ANC first.”

Her new cabinet created a planning commission to be headed by the now former economic development minister Firoz Cachalia.

Community safety minister Khabisi Mosunkutu was axed from the executive committee and replaced by Nonhlanhla Mazibuko.

Sports minister Nelisiwe Moerane was also given the boot and replaced by Lebogang Maile, the Gateung ANC Youth League’s chairperson.

Cachalia will head the planning commission, while former provincial health minister Qedani Mahlangu will take over the economic development portfolio.

The new health minister is Ntombi Mekgwe, a former mayor of Ekurhuleni.

Local government and housing minister Kgaogelo Lekgoro was appointed as a political advisor. His position would be filled by Humphrey Mmemezi, the deputy secretary of the Gautng ANC.

Bheki Nkosi, formerly the minister for roads and transport, is the new minister for infrastructure development.

Ismail Vadi, chairperson of the portfolio committee of communication in Parliament, takes over as roads and transport minister. – Sapa