Obama admits he needs ‘to do a better job’ 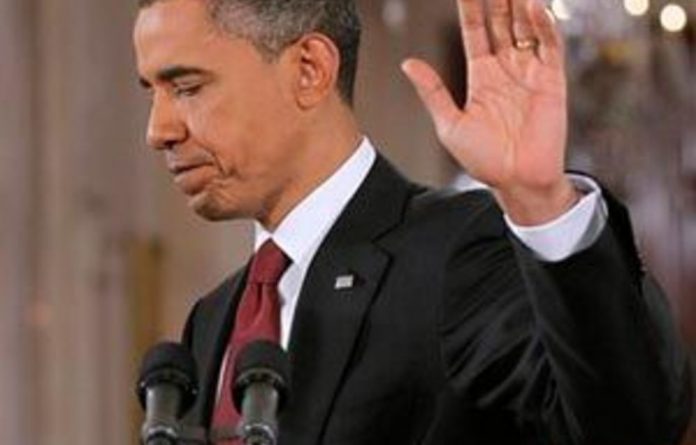 US President Barack Obama has conceded the Republicans gave the Democrats a “shellacking” in mid-terms and says he remains willing to compromise.

United States President Barack Obama admitted he had been “humbled” on Wednesday by the worst Democratic mid-term election defeat in 70 years, and promised to work alongside the revitalised Republican party in Congress.

Obama admitted that the Republicans had given his party a severe beating — or as he termed it, a “shellacking” — and said it had given him a late and uncomfortable night. “Some election nights are more fun than others,” he said. “Some are exhilarating. Some are humbling.”

At a White House press conference, he portrayed himself as contrite after the election results, which saw the Republicans make gains across the country, capturing control of the House of Representatives with a majority of more than 60 and just failing to win the Senate.

He admitted he may have been out of touch with the mood in the US, saying that was a consequence of being in the White House “bubble”, and maybe he had got the message wrong during campaigning.

“The election … underscores for me that I’ve got to do a better job, just like everybody else in Washington does.”

‘Willing to compromise’
He also offered to sit down with Republican leaders in the House and Senate, John Boehner and Mitch McConnell, along with their Democratic counterparts, to discuss areas where they could work together.

But he offered no compromise on healthcare, on a looming row over tax cuts, financial regulation or cutting the public debt — all he was prepared to consider in the way of changes to his health reform, which will extend insurance coverage to millions more Americans in 2014, were “tweaks”.

The divide between the White House and the Republicans, who secured victory partly because of public anger over the billions in public debt, will widen further after Wednesday’s announcement by the Federal Reserve that it is committing $600-billion more in government bonds to try to stimulate the sluggish economy.

Obama has consistently defended the billions already spent on so-called quantitative easing as necessary to move the country out of the biggest recession since the Great Depression, but the Republicans portray it as mortgaging the future of America’s children and grandchildren.

At his press conference, Obama acknowledged public anger on the issue. “There is no doubt that people’s number one concern is the economy,” he said. “What they were expressing great frustration about is that we haven’t made enough progress on the economy.”

Meanwhile, at a press conference in Congress, Boehner, who will take over as the House Speaker from Nancy Pelosi in January, offered more than a glimpse of the warfare about to descend on Washington. “The American people have concerns about government takeover of healthcare,” Boehner said. “I think it’s important for us to lay the groundwork before we begin to repeal this monstrosity.”

Priority
He saw cutting public spending as another priority. “It’s clear the American people want us to do something about cutting spending here in Washington and helping to create an environment where we’ll get jobs back,” Boehner said. Another Republican wish is to retain tax cuts introduced by George Bush that would benefit millionaires and billionaires. Congress has to decide by December 31.

But Democratic leader in the Senate, Harry Reid, who had been high on the Republican hit list but survived a tough race in Nevada, offered no concessions. “It won’t happen,” he said bluntly, in response to the Republican proposal.

The strength of the Republican swing was shown in races beyond Congress: they took a majority of the 37 governorships at stake and 19 of the state legislatures.

The grassroots right-wing Tea Party established a beachhead in the Senate, with two of their favourites, Republicans Rand Paul and Marco Rubio, winning Kentucky and Florida. They are now in a position to cause problems for the Democrats and mainstream Republicans, who they regard as having betrayed conservatism.

Despite predictions of apathy, more than 80-million voted, about normal for a mid-term election. Alarmingly for the Democrats, though, exit polls showed more voters now identify themselves as conservatives than in 2008, 7%. The Democrats will almost certainly lose control of the Senate in 2012 if the trend continues. — guardian.co.uk