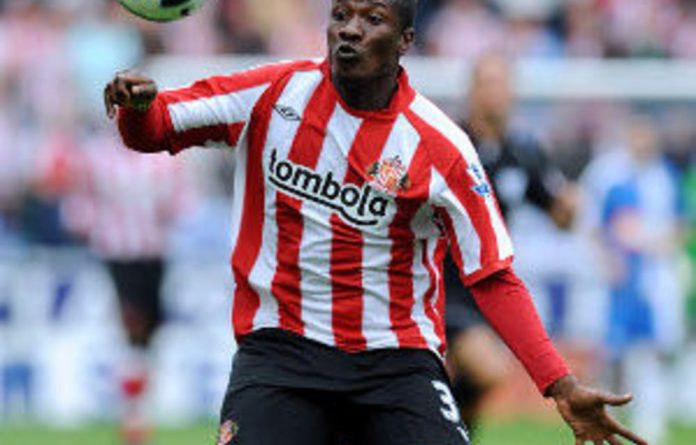 Tottenham’s winless streak in the Premier League was extended to four matches on Tuesday after Asamoah Gyan clinched a 1-1 draw for Sunderland.

The Ghanaian striker exploited a mix-up in the Spurs defence in the 67th minute for his third goal in two matches for Sunderland, wiping out Tottenham’s lead less than three minutes after Rafael van der Vaart had put his side ahead.

“Once we scored, I couldn’t see us not winning — they had not really had a shot,” Spurs manager Harry Redknapp said. “We suddenly get the mix-up and it all changes.”

Stoke also looked like being forced to settle with a draw in the night’s other match after throwing away a two-goal lead against Birmingham. But Dean Whitehead produced an 85th-minute goal to clinch a 3-2 victory for Stoke.

The home side was equally dominant at White Hart Lane, but Spurs failed to reproduce the attacking ruthlessness that secured a victory over holder Inter Milan on the same ground in the Champions League a week earlier.

The first came after two minutes, diving low to deny Luka Modric’s shot from the edge of the penalty area.

A two-handed save from Gordon also thwarted Van der Vaart’s effort from a tight angle. And a powerful strike from David Bentley was tipped over by the Scotland goalkeeper just before half time after the midfielder cut in from the right on his first league start since May.

Spurs were seeing just why Sunderland had not conceded in four of their previous five matches and Pavlyuchenko was hauled off at half time, with Peter Crouch taking the Russia forward’s place.

Bentley had a penalty claim dismissed and was adjudged to have dived by referee Howard Webb under Bolo Zenden’s challenge.

Van der Vaart nets the ball
But Spurs made their breakthrough when Crouch headed on Gareth Bale’s cross at the far post beyond Gordon and Van der Vaart brought the ball down with his chest before spinning and sending it in the net.

Confusion, though, in the Spurs defence between William Gallas and Younes Kaboul allowed Danny Welbeck’s pass through to Gyan, with Ghana’s top performer from the World Cup sliding the ball beyond goalkeeper Heurelho Gomes.

Sunderland has relied on Gyan and Darren Bent, who is out injured, for all its goals this season. The only others have been own goals.

“We made hard work of it in the first half,” Sunderland manager Steve Bruce said. “Let’s not take anything away from Tottenham, they’re a very, very good team.

“The one thing we tried to do in the first half was stop their midfield dominance. To be fair, it didn’t work, so we changed it [in] second half.”

Sunderland are level with Spurs on 16 points — nine behind leaders Chelsea, who host Fulham in the west London derby on Wednesday.

Stoke lifted from relegation zone
At Stoke, Robert Huth put the home side in front in the 44th minute, with the captain lashing the ball in off goalkeeper Ben Foster after Ricardo Fuller’s shot from the edge of the box ricocheted off Birmingham players.

Fuller extended Stoke’s lead in the 71st minute, with the Jamaica striker twisting and turning before striking into the top corner.

Just when Stoke looked to have wrapped up the win, Birmingham substitute Keith Fahey pulled one back three minutes later after a mistake by Danny Higginbotham.

Cameron Jerome then glanced Sebastian Larsson’s cross into the net two minutes later. But Stoke still found time for a winner, with Whitehead prodding the ball into the net after Matthew Etherington slipped a cross between the legs of Scott Dann.

“They put us under a lot of pressure and pushed us back but it was nice to get win in the end,” Whitehead said.

The victory lifted Stoke three points clear of the relegation zone, while Birmingham remains a point behind. — Sapa-AP