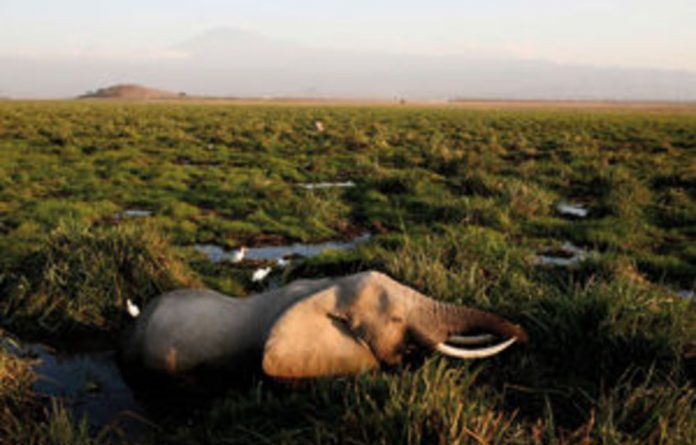 Although the world’s media spotlight is focused firmly on South Africa’s continuing battle against rhino poaching, threats to some of the subcontinent’s other critically endangered and threatened species are largely being ignored.

The sad truth is that poaching is not the major cause of pushing species of wild African fauna and flora to the brink of extinction — the loss of habitat takes that particular “honour”.

The rapid expansion of human settlement and development of land for habitation and industry throughout Africa has had a severe impact on wildlife.

In this respect, two iconic species have been particularly negatively affected — elephants and lions. Although the elephant is not regarded as endangered, current estimates suggest that between 470 000 and 600 000 live in Africa.

During the 1970s and 1980s ivory poaching decimated populations, apparently killing half of Africa’s elephants at the time. This led to the Convention on the International Trade in Endangered Species (Cites) placing the elephant on Appendix 1 of the convention in 1989 and banning international trade in ivory.

In Southern African elephant populations seem to be holding their own and in some cases expanding their ranges, but in West, Central and East Africa forest elephants and some savannah populations are severely threatened by the rapid loss of habitat.

In some Southern African countries poaching continues to threaten elephant populations. In Zambia, poaching is still rife in some areas, causing a steady, slow decline in numbers. Likewise northern Mozambique and southern Tanzania have become the targets for large organised poaching syndicates.

According to Professor Rudi van Aarde of the University of Pretoria’s Conservation Ecology Research Institute (Ceru), statements implying that there are “too many” elephants and that elephants destroy biodiversity are without scientific foundation. The status of elephants, he says, is “precarious”.

Van Aarde has conducted extensive research on elephant populations in Southern African countries for more than a decade and points to the fact that Africa has half of the elephants it had 40 years ago.

Lions have suffered a similar fate, with numbers in Africa dropping drastically because of habitat loss and human infringement on traditional ranges. The total number of lions left in Africa could be as low as 15 000. Twenty years ago it was 250 000.

Listed as “vulnerable” on the International Union for Conservation of Nature’s Red Data list, imminent extinction is not on the cards for Africa’s lions, but populations are dropping rapidly.

As Africa’s apex predator and perhaps its most popular tourist attraction, the decline in lion numbers is cause for alarm. Most lion deaths occur at the hands of stock farmers in a reprisal for loss of livestock.

In Kenya this has been particularly problematic in the great plains regions where Maasai tribesmen traditionally graze their highly prized cattle in the heart of “lion central”.

Areas such as Amboseli and the Maasai Mara have seen huge losses in lion numbers, but recent initiatives to educate and change the mindset of the Maasai people, whose men traditionally had to kill a lion with a spear to attain adulthood, have begun to bear fruit.

Compensation for stock losses, combined with programmes paying Maasai warriors to guard lion populations and aid in scientific research are making steady inroads into rebuilding pride numbers. That same research has begun to show that lions are not public enemy number one when it comes to attacks on cattle, accounting for as little as 14% of stock losses.

The major culprit has emerged as the spotted hyena. Human-wildlife conflict is the byproduct of the loss of habitat and is perhaps the over-riding issue for conservation of wildlife in Africa.

As human populations expand into wilderness areas, they come into contact with the animals that live there, often with tragic results and fatalities on both sides. Human settlement invariably happens next to or close to permanent water sources such as rivers or lakes, which are also crucial to the survival of wildlife.

In Zambia’s Lower Zambezi Valley, for example, local communities are based on the banks of the Zambezi River, which, being the fourth-largest river in Africa, is Southern Africa’s most crucial and pivotal water system. This puts communities in direct conflict with a number of dangerous animals, such as elephants, hippos and crocodiles.

In the dry season, elephants go to the river at dawn and dusk to drink. Their well-trodden paths are also used by villagers who also get their water from the river, usually at the same time as the elephants.

Their fields and crops are prime targets for the elephants, with the result that crop raiding has become the single-biggest issue in human-wildlife conflict in the Lower Zambezi. “Problem” animals are invariably shot.

As is the case with most conservation issues, education is key to a turnaround in cases of human-wildlife conflict. Organisations such as Conservation Lower Zambezi, an NGO working closely with the state-run Zambian Wildlife Authority, are slowly making headway with educational programmes and anti-poaching patrols, but progress is slow as it invariably involves changing traditionally held beliefs and mindsets.

In Amboseli in Kenya, the Mbirikani Predator Compensation Fund is making similar headway with the Maasai communities who live on the periphery of the Amboseli National Park and Amboseli plains region.

Spearheaded by Richard Bonham, a local conservation hero and safari lodge owner, who established the Maasailand Preservation Trust, of which the fund is a small part, mindsets are slowly beginning to change and the lion guardians, or simba morans, are now protecting the lions they used to kill.

These initiatives and the future of species such as elephants and lions depend on money and no small amount of it at that. Private and government funding is needed to ensure the future preservation and conservation of Africa’s fast-disappearing wild places and to halt the downward spiral caused by habitat loss.

To paraphrase the late Anton Rupert, one of South Africa’s most prominent conservation pioneers, without money conservation is just conversation.