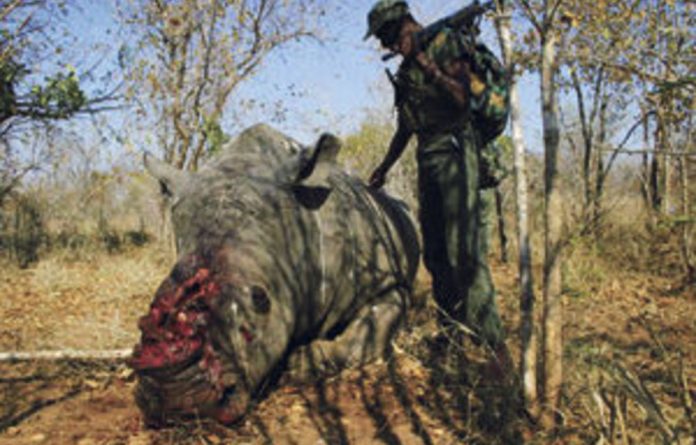 Two hundred and thirty two — that’s the number of rhinos poached in South Africa so far this year, according to South African National Parks (SANParks) and the number is expected to rise to about 280 by the end of 2010.

There are an estimated 23 000 rhinos worldwide, and South Africa, which is home to 90% of these, has lost roughly 1% of its population in less than a year to poachers.

This gave rise to the calling of an emergency summit in Pretoria at the beginning of October by Buyelwa Sonjica, then-minister of water and environmental affairs, who tasked it to find solutions to the rapidly escalating problem.

It came hot on the heels of the high-profile arrest of 11 members of a suspected poaching syndicate in Limpopo, which included game farmer Dawie Groenewald, who was released on a record-breaking R1-million bail.

The escalation in poaching is apparently related to an increase in demand for rhino horn in Asia, where it is believed to have medicinal and aphrodisiac properties.

Demand has spiked alarmingly in Vietnam and China following claims that a Vietnamese government minister suffering from cancer was “cured” by using rhino horn.

Sonjica said at the summit that the South African government would engage the Southern African Development Community (SADC) and countries in the Far East in an effort to stem the slaughter.

She said her department was in talks with its Southern African partners through the SADC Rhino and Elephant Security Group, and the Rhino Management Group.

Sonjica said the department was consulting the department of international relations and cooperation about bilateral engagements with China and Japan on wildlife law enforcement, capacity building and improved technology to aid in the detection of illegally traded wildlife products.

So, is there a ray of hope for South Africa’s rhino population? The department of environmental affairs’ recent partnership with SANParks to establish the interim National Wildlife Crime Reaction Unit suggests so.

This, combined with the institution of national norms and standards for the marking of rhino horn and the trophy hunting of white rhino, and the implementation of a national moratorium on the sale of individual rhino horns and derivative products in South Africa, demonstrates that the government is taking the issue very seriously.

But is it too little, too late? The government has come under fire for failing to apply adequate political pressure on the Asian countries that are the ultimate destination for the vast majority of poached horn.

The summit showed that 101 rhinos were legally hunted in South Africa from January to October and that the overwhelming majority of applications to hunt rhino were from Vietnamese nationals.

Two years ago Vu Moc Anh, a member of the Vietnamese diplomatic corps, was filmed secretly outside the country’s embassy in Pretoria openly dealing in illegal rhino horn.

The film was broadcast on SABC2’s environmental programme, 50/50, and resulted in Vu being recalled. The South African government remains mum on the involvement of diplomats in the illegal trade.

The World Wide Fund for Nature (WWF) and other wildlife agencies place Vietnam and China at the top of the list of culprits when it comes to the demand for horn, with Vietnam increasingly implicated as the main driver of the trade in Asia. But the good news is that the Vietnamese are cooperating with current initiatives.

Traffic, a joint initiative of WWF and the International Union for Conservation of Nature (IUCN) to combat the illegal trade in wildlife and wildlife products, recently facilitated a visit to Vietnam of five South African representatives to find ways to address the illegal trade in rhino horn.

The WWF believes that education is the key to reducing demand. Morné du Plessis, the chief executive of WWF South Africa, said education programmes specifically designed to combat the demand for rhino horn products were in place in Asian countries and had had considerable success in other parts of the world.

According to him, the drastic reduction in the number of black rhino, from 70 000 in 1970 to just 2 500 in 1992, was caused by demand for rhino-horn daggers in Yemen, but WWF education programmes there had reduced the trade in the daggers to “practically zero”.

The summit also gave rise to a more controversial proposal to combat poaching — to legalise national and international trade in rhino horn and even to allow intensive breeding programmes for the sole purpose of dehorning and selling the horns on the open market.

Stakeholders tasked Sonjica to order a scientific investigation into the viability and legality of this but it is feared that it would be unlikely to result in a decrease in demand and instead lead to “canned” hunting with the animals being bred with the sole purpose of being shot for their horns.

Meanwhile private rhino owners have been given the go-ahead to dehorn their animals should they so wish, in keeping with legislation and as an “interim measure” to protect the animals from poachers. Horns have to be fitted with microchips and stored in a safe.

Rhinos in national and provincial parks will not be dehorned. SANParks has stepped up its efforts to combat poachers, particularly in the Kruger National Park, the hardest-hit area where 104 rhino have been poached this year.

Last month rangers engaged two groups of suspected rhino poachers, who had entered the park from Mozambique. Two poachers were shot, one fatally.

David Mabunda, the chief executive of SANParks, said that, although it was unfortunate that there had been a loss of a life, the time had come for poachers to realise that South Africa was serious about protecting its rhinos.

Mabunda said he wanted to send a stern warning to would be poachers that SANParks rangers were as organised as they were and would fight fire with fire to protect South Africa’s natural resources. A total of 119 suspected poachers have been arrested this year, 45 of them in the Kruger Park.