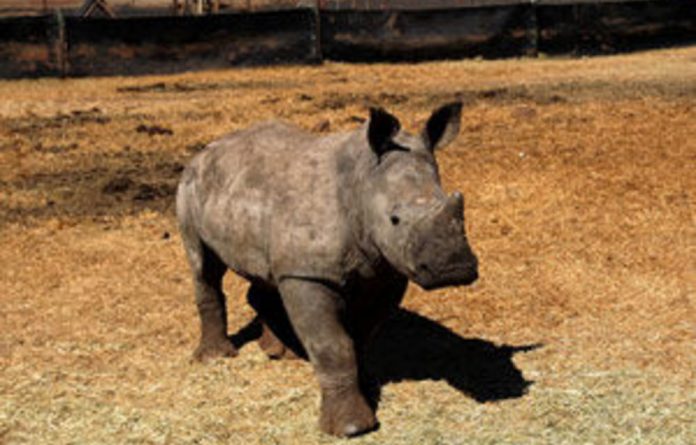 South Africa is fighting an increasingly bloody war against poachers who have doubled the number of rhinos they have killed in a year to feed a soaring demand for rhino horn from Asian organised crime syndicates.

The number of rhinos killed by poachers this year has soared to 261, more than double the total for the whole of 2009. Now the national army has been urgently requested to patrol game parks and some rhino owners have been forced to hire ex-military security guards.

Officials have vowed to “fight fire with fire”, prompting comparisons with the battle against violent crime in South African cities. At least two suspected poachers have been killed in gun battles with police in the past three months , including in the Kruger National Park. Last week a man accused of illegally selling rhino horns killed himself and a poacher was shot and possibly left permanently disabled.

The trend is blamed on a sharp rise in the appetite for rhino horn in Vietnam and China because of a false belief in its medicinal value. Claims that a Vietnamese government minister was “cured” of cancer by using rhino horn have boosted the black market. The price of rhino horn is $55 000 a kilogramme, making it far more expensive than gold, according to the International Rhino Foundation.

South Africa is home to 90% of the world’s estimated 23 000 rhino population. But it is now losing more than 20 rhinos per month — the total of 261 reported by South African National Parks (SANParks) is already more than double the 122 killed in 2009 and dwarfs the 83 lost in 2008. Conservationists warn that at the present rate the number of killings will outstrip new births.

The mass slaughter has been condemned by President Jacob Zuma and Archbishop Emeritus Desmond Tutu. There have been public protests, media campaigns and even the professional hunters’ association has spoken out. A critically endangered black rhino that survived being shot nine times became a national celebrity when it was moved to Johannesburg zoo.

“It’s a bloody losing battle,” said Riaan Kotze, manager of Inkwe Valley Game Lodge in Limpopo province, which has lost five rhinos in the past year — two with a single bullet to the neck at close range. “Most farmers around here have sold all their rhino just get rid of the problem. It’s a security issue: some have been attacked on their farm just to see if they have rhino horn in their safe.”

Kotze (35) said he did not want to hire a private security firm partly because they charge up to R30 000 per armed guard per month. He has instead intensified his own ranger training but said they are not allowed to shoot poachers except in self-defence.

He added: “The only hope is the police and government are finally waking up and putting more money and resources in. They’ve caught a few poachers, but to stop it altogether is going to take some time.”

Sophisticated poachers
Experts say that poachers, backed by crime syndicates, are increasingly sophisticated, using helicopters, specialised tranquillisers that make no noise, body armour, night vision equipment and mercenaries experienced in rhino tracking. Once a rhino’s horn has been hacked off, they leave the animal to bleed to death.

Syndicate members are a mix of South Africans and other nationalities and defy easy definition. There was shock in the farming community last month when police arrested 11 suspected members of a major poaching ring that included two vets and a game farmer.

Wanda Mkutshulwa, a spokesperson for SANParks, said: “In the past three years we’ve seen an infiltration by organised crime. The syndicates involved are using sophisticated equipment to make, for want of a better phrase, a killing.”

Some now fear a “bush war” between security forces and criminals. Last month in Kruger park, a leading attraction for international tourists, two armed suspected poachers were confronted and shot by rangers. One died at the scene and the other was later arrested in hospital.

Dr David Mabunda, the chief executive of SANParks, said: “We want to send a stern warning to would-be poachers that we are as organised as they are and we will fight fire with fire, all in an effort to protect our natural resources.”

About 119 suspected poachers have been arrested this year, including 45 in Kruger park. But despite new equipment such as night-equipped helicopters and goggles, rangers lack the manpower or resources to cover huge tracts of land.

The South African government held an emergency summit on the issue last month and recruited the help of Interpol. In another sign of the escalating conflict, Lindiwe Sisulu, the South African defence minister, announced today that SANParks had asked the army for immediate assistance. “Rhino poaching is a crime we will have to stop immediately, it is cruel and brutal, SANParks has requested us to assist urgently,” she said.

Among other defensive measures, some park officials have implanted GPS microchips in the horns of rhinos so they can be tracked by satellite.

Military discipline
Private game parks are increasingly turning to companies run by former military officers. Among those patrolling farms in Limpopo is Nkwe Wildlife Security Services. Its owner, Simon Rood, told the Times recently: “We have very strenuous training. Only one out of eight people make it. It’s frustrating and hard; it’s military discipline.

“The scouts have four patrol schedules. We have 15-day patrols, 10-, seven- and four-day patrols. They spend all that time in the bush. They have a backpack and food and water — baked beans, canned, fish, sugar, mealie meal, a paraffin stove, a radio. And they are armed.”

A number of owners have begun to dehorn rhinos so they no longer have value, and one caused international outrage by suggesting that horns be injected with poison as the ultimate deterrent.

Prof Rosaleen Duffy, an academic at Manchester University who has studied the tactics used to defend wildlife, said: “We should be very concerned about the use of private security companies in game parks. Rangers — private and state employed — have a difficult job and often faced heavily armed poachers. However, we need to step back and think about the wider implications. It is not clear on whose authority private security companies can act in defence of wildlife. For instance, if they kill a suspected poacher, who provides authority for them to shoot to kill?”

She added: “We also need to be concerned about private companies because they operate on a profit motive — which may prompt them to engage in more violent responses to suspected poachers.”

Rhino horn has been used for centuries in traditional Chinese medicine, where it was ground into a powder and often mixed with hot water to treat ailments including high fever, gout, rheumatism and even possession by the devil.

Demand has surged in recent years in south-east Asia as economic growth creates a newly affluent middle class of consumers.

Studies show that it is seen as a cancer remedy in Vietnam and neighbouring countries. Recent reports that a Vietnamese Cabinet minister claimed rhino horn cured him of cancer gave a further publicity boost, although the origin and details of this story remain vague.

In fact rhinos are being killed in their hundreds for nothing. Their horns are compacted keratin, the same substance that human fingernails and hair are made from, and scientists say it has no medicinal properties.

Police, environment and national park officials from South Africa travelled to Vietnam last month to hold urgent talks about halting the illegal trade. There was huge embarrassment for Vietnamese diplomats two years ago when an employee was caught on film receiving a rhino horn on the street outside the country’s embassy in South Africa. – guardian.co.uk