The changing face of kiba 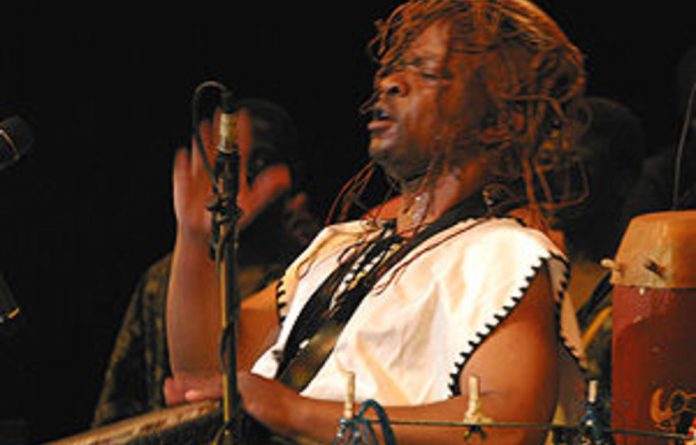 It was a brick-sized cellphone that set multi-instrumentalist Sello Galane on his musical mission.

“I was researching at the Smithsonian in Washington in 1996, very proud of my new little Eriksson phone.

Then I met this sound engineer carrying a huge, heavy Motorola. When I asked her why, she said proudly: ‘This is American technology — it’s mine!’

That brought me up hard against the question of what South Africans have to offer the world that’s uniquely ours.”

One answer, for Galane, was music. And on Friday and Saturday at the Market Theatre his performances will celebrate 10 years of free kiba, the genre he has pioneered and taken around the world.

Kiba, the music of the Pedi and Northern Ndebele peoples, provided social commentary, mediation and healing on a foundation of cross-rhythms and call-and-response vocals.

The kiba tradition
Galane grew up in a musical family — everybody listened to jazz on the radio, but his father and uncle had also been instrument-makers and kiba ensemble leaders in their home village near the Mokopane Caves, before it was forcibly cleared.

“In 1983 I’d interviewed my father for a family history project. The music aspect of what he said didn’t make much impact then.

“But around 1990 myself, [guitarist] Selaelo Selota and Magalane Phoshoko — who’d all been engaging deeply with jazz — started getting intrigued by the kiba tradition, with its polyrythms and polyphony.

Galane registered for a master’s at the University of Cape Town and used his time at the Smithsonian to gather ideas about research methodology.

Back home, he apprenticed himself to the senior women who had practised kiba in Seshego, near Polokwane.

“Some of them didn’t have drums any more, but were expert in the traditions. I had some congas but knew almost nothing — After five years I was only just grasping the different rhythm structures and still had to learn most of the themes.”

New developments
Alongside research, music studies, teaching and his first efforts at recording, Galane was developing other ideas.

“I worked with Philip Tabane. His clarity of thought in defining malombo made it clear to me I needed to do the same for kiba.”

After workshops and pilot performances, the first full-scale kiba show was at the Market Theatre in 2000, with Selota as a guest and the women drummers — “my professors” — as featured performers. A live recording (the first of 12) followed.

It wasn’t easy to persuade broadcasters to take the music seriously and he credits Max Mojapelo of ThobelaFM for giving the music its first airplay. The track, Pula (Rain), went to joint number one with Oliver Mtukudzi’s Todi on the station’s charts.

It took 18 months more before it took off in Jo’burg and rather longer before Galane had cracked the record shops and set up an infrastructure to handle sales.

He calls his genre “free kiba”, because he has innovated on its original characteristics and, by touring and with documentation, made it accessible to players everywhere. “I’ve freed the music from tribalism,” he says.

Not the norm
He believes apartheid-era ideas about tribe as the root of African music has persisted for too long. “When I was on the penultimate chapter of my thesis, I talked to an old man who debunked my ideas on kiba so much I had to rewrite. Mr Ntswane was 120.

His voice had faded so much I had to hold my recorder right by his mouth. And he said, ‘Oh, no, my boy, kiba isn’t a typically Bapedi music. It comes from your people, the Northern Ndebele under Chief Langa. They came with that concept to Premier Mines and we learned it from them there’.”

Galane says: “The idiom of kiba people took from Polokwane to the mines got changed. They had to sharpen it to compete in the mine arenas. The music travelled back and forth and each time it came back from the cities it was tighter, edgier and had new elements — from in-dlamu, from Malawian music and so on.

That’s what kept it so fresh and popular with people back home, who still felt it as kiba. It’s not about tribal origins. It’s about where you’ve been, who you’ve met and what you’ve done with those ideas.

“If you look at Alex today, I am sure the people playing kiba there are bringing in East and West African elements, because of performing in that mixed community. It’s still kiba.”

For Galane, there’s never been a hermetic seal between city and countryside or between ethnic groups. “Look at all the fridges and lounge suites travelling from Jo’burg to Polokwane.

In the old days it used to be guitars and gramophones. That’s why the tribal construct is so wrong. Those ladies who play kiba, when they need a break from drumming, they turn on the radio and dance to hip-hop. They don’t live in some sealed traditional-music cage; they own the whole soundscape.”