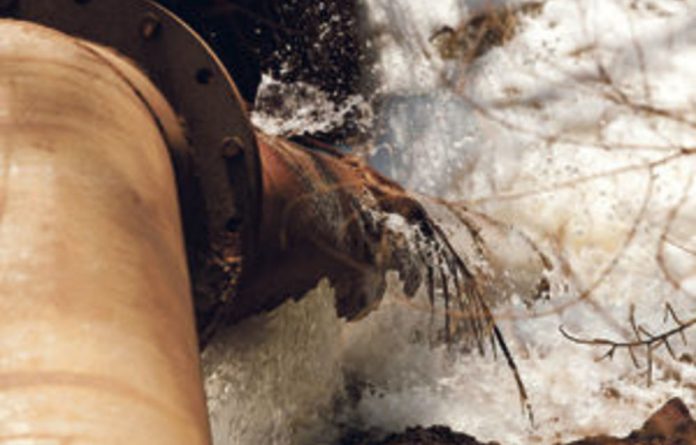 The prospect of South Africa losing up to 80% of its fresh water supply in the next few years because of rising levels of pollution has given a wake-up call to government agencies and the public.

This shocking projection of the country’s Environment and Conservation Association has highlighted the urgent need for South Africans to start taking water, one of our most precious of resources, seriously and implement measures to protect the national reserve, not just for the next few years, but for generations to come.

Some of the major problems faced by the government include the poor maintenance of major storage dams, failing water and sewerage infrastructure and outdated and poorly maintained delivery systems, which have seen municipalities across the country fail to reach a minimum health and safety standard in the quality of drinking water.

But it is the problem of acid mine drainage (AMD) that has taken South Africa’s water resources by storm. AMD is one of the major culprits for the steady degeneration of the country’s groundwater reserves, particularly in the mining capital of Gauteng, where more than a century of gold mining has caused untold damage.

The conundrum with AMD is that the past decade has seen significant and in some cases revolutionary developments in the potential treatment of AMD and sulphate-rich mine effluent.

Scientific researchers, partnered by the private sector, have made tremendous headway in finding ways to deal with AMD, creating methods to purify the mine effluent sufficiently to allow it to be used for crop irrigation and potentially even drinking water.

The Council for Scientific and Industrial Research (CSIR) in Pretoria developed viable processes and products for the treatment of AMD, which were marketed to the mining industry as far back as 2003.

At the turn of the millennium the CSIR’s Environmentek unit was hailed as a world leader for its development of processes to treat mine effluent commercially and AMD by neutralising and removing harmful metals, acids and sulphates in mine waste.

Yet mining conglomerates have been extremely slow in taking up the purification processes on offer, even though trials have shown that they potentially save mines millions of rands and help to protect the environment in the process.

Now the government has been tasked to find solutions to the problem of AMD, in spite of the fact that home-grown solutions have been available for some time.

Although largely seen as preventable by both national and international environmental agencies, the current water crisis is now receiving the full attention of the government, which has responded to the calls to take action by establishing a national water advisory committee, made up of individuals from civil-society groups, the business sector, academia, water experts and representatives of the national and provincial governments.

The committee will advise Buyelwa Sonjica, the minister of water and environmental affairs, on issues relating to the management, sustainability and protection of South Africa’s water resources. Sonjica has acknowleged that, because South Africa is a waterscarce country, it faces a huge challenge connected to water quantity and quality.

The situation is exacerbated by climate change. Providing far-flung rural communities with water is a major challenge. With millions of South Africans living without access to adequate clean water, the most basic of human rights, the problem of how to sustain the country’s dwindling water supplies is even more critical and is forcing government and its agencies to think out of the box and find innovative solutions.

Some solutions to water shortages have been around for centuries. Rainwater harvesting, for example, is the practice of collecting rainwater and storing it for subsequent use and has been used for millennia across the world to relieve pressure on natural water resources.

The most common form of harvesting is from the roofs of buildings, with rainwater running down gutters and pipes into storage containers. Stormwater run-off can also be collected in vast storage tanks. This rainwater can be used for irrigation of crops, watering gardens, filling swimming pools, laundry, toilet flushing and bathing, and when properly treated can even be used as drinking water.

There has been a revival in traditional methods of rainwater harvesting in recent years because of the increased pressure on water resources and the increasing cost of centrally supplied water. As a result, there is now a range of modern products and design techniques for rainwater capture that offer a cost-effective and environmentally friendly solution to some water problems.

Desalination is another alternative that has received attention. Using tried and tested reverse osmosis methods, seawater can be purified to potable levels.

The cutting-edge desalination plant in Sedgefield, near Knysna in the Western Cape, has convinced the local municipality that this method offers a sustainable “green” solution to the Garden Route’s much-publicised drought problems.

The plant has some interesting innovations in that it harnesses and reuses the pressure produced in the reverse osmosis process, saving as much as 40% of the energy required to run the plant. The result is that the cost of producing potable water has been significantly reduced.

As a result of climate change and increased human activity, our rivers have undergone the most extreme changes of any of the country’s ecosystems in the past few decades.

According to the Endangered Wildlife Trust (EWT), the country’s freshwater systems are in a terrible condition, with more than 80% of the main river ecosystems threatened.

The EWT’s Healthy Rivers programme is helping to address this problem. Initiated in 2008 to combat capacity shortages and help conserve dwindling resources, the programme primarily aims to tackle the need to conserve severely threatened freshwater aquatic species and encourage stakeholders to manage and implement proper conservation plans in catchment areas. The programme acts as a “water watchdog”.

Project executant Bridget Corrigan says the key to effective conservation of river systems is proactive, rather than reactive planning. She says conservation management in South Africa largely ends up being an excercise in impact mitigation rather than prevention.

Corrigan says that although mining and industry pose serious threats to rivers, farming processes, formal and informal settlements and the introduction of alien invasive species also affect water systems. It is these and other critical factors that the programme is actively addressing.

The Healthy Rivers Programme is instituting a series of conservation projects in key catchment areas, kicking off with the Crocodile-Marico Catchment Conservation Project early next year. This project will focus on the Crocodile (west) and Marico water management area, which lies largely in North West Province.

It was selected as a keystone project because of its unique landscape features and high levels of development and ecological transformation that pose a serious threat to the conservation of rivers. It is hoped that the project will help to secure the long-term health of the ecosystems that depend on the catchment area and provide leverage for similar projects across the country.

Big mission to save tiny frog