Ashes to ashes, mortar to dust 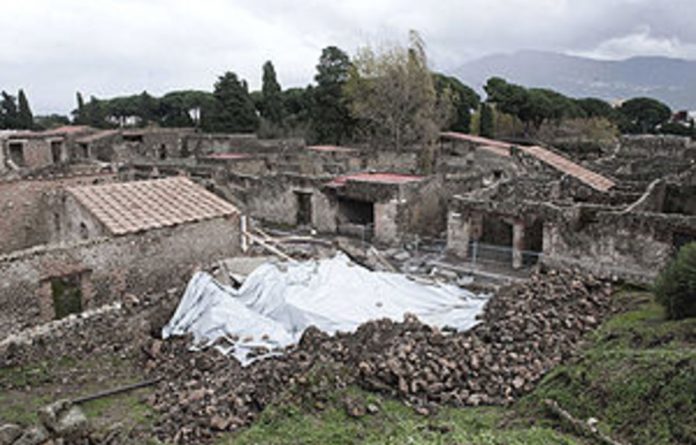 At the top of the Via di Nocera, just before the narrow, stone-floored lane meets the more stately Via dell’Abbondanza, a small cluster of people have gathered to peer through a strip of fencing, snapping their pocket cameras quietly in the deepening afternoon gloom.

In front of them, taped off by strips of red-and-white striped plastic, is a jumble of large blocks of stone, which had crashed forwards and sideways and on to the road, across a site no wider than a small suburban garage.

It may not look like much but to the Italian newspaper La Repubblica this ignominious heap is a “world scandal”. Italian President Giorgio Napolitano called it “a disgrace for Italy”.

To Walter Veltroni, a former leader of Italy’s opposition Democratic Party, it is the proof that the government of Prime Minister Silvio Berlusconi “is not interested in culture”.

Unesco, which recently announced it was sending a team of inspectors, said it had had “a devastating effect internationally”.

It had survived the cataclysmic volcanic eruption in AD79 that engulfed and wiped out the town, a partial excavation in the 1920s that exposed its façade but left its rear rooms still buried, and even heavy Allied bombing in 1943 that forced it to be extensively rebuilt in the 1950s. But thanks to some combination — depending on who you ask — of the heavy Neapolitan rains, the decaying restored concrete roof, management incompetence and political neglect, it did not stand long enough to see daylight on Saturday November 7.

Lost
Though it may be possible, once again, to rebuild it from the ground, the richly decorated frescoes of gladiators that gave the building its name may be lost for ever.

If the survival of the city of Pompeii, dug out from under layers of volcanic rock more than 17 centuries after its destruction, is an archaeological miracle, the collapse of any part of it is a tragedy.

The problem for the Soprintendenza Archeologica di Napoli e Pompei (SANP), the body charged with the site’s maintenance, and the Italian culture ministry, which in part oversees it, is that experts believe that at present levels of maintenance the House of the Gladiators will certainly not be the last of Pompeii’s treasures to tumble.

In part, argues Professor Andrew Wallace-Hadrill, an archaeologist with more than 20 years’ experience at Pompeii and Herculaneum, a smaller town nearby that was also destroyed in the eruption, the collapse is inevitable in a site of the scale and fragility of Pompeii.

“It’s quite possible to spend tens of millions and still not protect the site. It’s not that we have Roman houses in a pristine state, nor were they ever built or intended to last for ever. Ultimately these [structures] are so unique that we’re trying to get more out of them than they were ever designed to do.”

Dr Jo Berry of Swansea University in Wales, the author of The Complete Pompeii and founder of Blogging Pompeii, a site for archaeologists working there, is more frank.

“A lot of the site is crumbling,” she says. “Buildings that have been dug up need to be conserved properly. Pompeii will continue to decay unless there is more basic maintenance on a regular basis.”

Pompeii, archaeological site
Alongside Pompeii’s justly celebrated glories — its frescoes, its delicate mosaics and the remnants of its grand public buildings — what no visitor to the city can fail to note is the bewildering scale of the task ­facing its custodians.

Though it was even in Roman times only a modest city, modern-day Pompeii amounts to an archaeological site of quite staggering scale. Many hundreds of buildings have been excavated, from the grandest temple to the most modest slaves’ quarters, and many of them are decorated with artworks that, alone, would be the prized masterpiece in any museum’s collection. All of them are held together, to a greater or lesser extent, by 2000-year-old Roman masonry.

And many are unquestionably in a truly perilous state. Although a number of the site’s most celebrated buildings — the House of the Chaste Lovers, the forum baths, even the humble brothel, exuberantly decorated in sexual scenes — have clearly benefited from care and cash, there are many more that appear still to be standing thanks only to the goodwill of the Roman gods.

Sections of the city’s enormous structural walls are propped up by wooden struts or steel supports and scaffolding and strips of orange plastic insist that visitors keep their distance. Roads closed to pedestrians have quickly been reclaimed by moss and grass, whereas small cracks in marble pedestals and brick walls have been colonised by weeds, and stray dogs growl at passing visitors.

The task faced by the SANP in protecting and maintaining Pompeii may be, in Wallace-Hadrill’s words, a “wretched duty”, but there is no question it is struggling to cope with the pace of decay. What is less clear is where blame for the perilous condition of much of Pompeii lies.

It is a fraught political question. Opposition politicians blame Berlusconi’s government and certainly he has made deep cuts to heritage spending, cutting maintenance budgets this year from €30-million to €19-million.

Loss of good sense
Others lay the blame on Italy’s dysfunctional political system more generally — a recent Corriere della Serra editorial said the site’s shabby state was “a symbol of all the sloppiness and inefficiencies of a country that has lost its good sense and has not managed to recover it”.

Others have been caustic about the SANP itself — the ministry of culture last year declared a “state of emergency” at Pompeii, enabling it to appoint a commissioner to oversee the soprintendenza. To Wallace-Hadrill, such criticism of the soprintendenza is “facile and unfair”.

Berry agrees. “The people who work on the site, many have been there for years and do the best job they can because they love the site. To suggest that these people are neglecting it, it’s insulting. They are doing the best that they can in a difficult situation.”

Can Pompeii be saved? Sandro Bondi, the culture minister, announced last week the establishment of a new foundation charged with assessing the state of decay and deciding what action to take. But critics point out that his insistence that work would resume on five key Pompeii houses ignored the need for a more modest programme of continual small-scale maintenance across the whole city.

To some, a possible model for the city’s salvation lies at Herculaneum, a few kilometres away. In part because of its size (the excavated part of the city is barely a tenth of the huge area uncovered at Pompeii), in part because its more modest celebrity frees it from the political symbolism of its world-famous neighbour, Herculaneum has quietly been permitted to take a markedly different approach to its conservation.

The two cities are not identical — Herculaneum, though destroyed by the same eruption, was engulfed by a different type of volcanic magma and is in some respects better preserved, with many upper floors, original metal grilles and even wooden doors and window shutters still intact. But the problems both cities face now they are exposed to the elements are similar.

Projects
Since 2000 the SANP, the Packard Humanities Institute, an American philanthropic foundation, and the British School at Rome have been working together on the largest ­private heritage sponsorship scheme in Italy.

Sarah Court, a British archaeologist in the team that makes up the Herculaneum conservation project, says the project, which will come to an end in two years’ time, has emphasised infrastructural stabilisation and maintenance across the entire site, rather than focusing on a select number of prestige renovations.

“Most conservation projects will go to a house and identify a dodgy mosaic or an unstable wall, and fix them, but not necessarily deal with the root cause that is causing them to fail. You end up with capital investment that doesn’t resolve problems.”

In contrast, at Herculaneum’s entrance, 20m below the surrounding ground level, at what until 79AD was the seashore, the project has installed large pumps to work 24 hours a day to remove rain and groundwater from the site. Careful consideration has been given to the placement of guttering — and the fact that it has to be accessible for clearing every six months — as much as to the shoring up of buckling ­decorative frescoes.

The problem in Herculaneum, as at Pompeii, she argues, is that nobody lives there any more. “When you live in a house, what do you do at weekends? You fix the dripping downpipe. The problem with any archaeological site is that you don’t have that. It’s nothing more difficult or more interesting than doing a bit of DIY on a regular basis.”

She acknowledges, however, the daunting scale of the challenge of achieving even that at Pompeii. To others, the solution may have to be more radical. Berry says: “The lesson of this collapse is that archaeology can’t happen without conservation and when you excavate you need to do it with a plan. It’s no good digging things up and just leaving them, because they will fall down.

“Excavators should be responsible for conservation, which is an approach that the SANP has already taken. We need to start discussions about what can be preserved at Pompeii and what can’t, and unfortunately that’s something that the general public is going to have to come to terms with.”

In the same way that the destruction of Pompeii in AD79 was its salvation, in other words, the “conservation” permitted by digging up the city over the past 250 years may have made inevitable the city’s eventual second destruction.

The challenge for its custodians will be to ensure that that day, if it must come, is very far off. — Guardian News & Media 2010