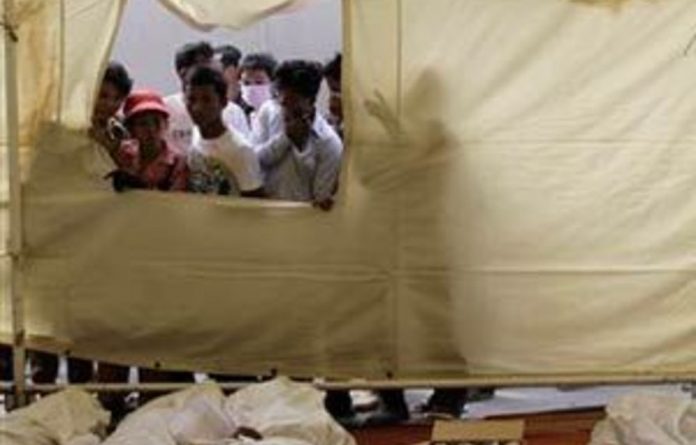 Saffron-robed Buddhist monks chanted as onlookers gazed silently across a bridge piled with the shoes and torn clothing left behind by victims of a stampede in Cambodia’s capital.

The body count stood at 375 by sunset on Tuesday and was expected to rise. Many people were missing and Cambodians had many questions about one of the darkest days of their country’s recent and troubled history.

The cause of the stampede on the Diamond Gate bridge late on Monday, the last day of an annual three-day Water Festival, remained a mystery.

“Everyone is shocked that this can happen to us,” said Chhun Sreypong (45) clutching her one-year-old baby and looking out across Phnom Penh’s Tonle Sap river, from where scores of limp bodies were dragged.

“Those who died were mostly youngsters. Many mothers have lost their children. No one knows why this happened.”

Survivors gave chilling accounts of being buried under piles of bodies, alive and dead, for as long as three hours, crying for help and clambering for air, open-mouthed as police doused the trapped crowd with water cannons.

“People were shouting for help and began to push,” said Touch Theara (38) who was among the thousands who flocked to Diamond Island to eat in restaurants, listen to live music and buy cheap clothes.

Her sister and her friend died on the bridge, which some described as a “gate to hell”.

About 755 people were injured.

Not since the era of the ultra-Maoist Khmer Rouge three decades ago, when 1,7-million people were killed in four years, has Cambodia seen such a huge loss of life.

Desperate screams
Scores of people leapt to their deaths from the pedestrian bridge, unable to swim and dragged under water amid frantic splashing as desperate and panicked people plunged down from above.

While many victims drowned, most perished while trapped under the weight of hundreds of fleeing revellers.

Hours after the tragedy, the scene was untouched. Shoes, flip-flops and ripped clothing piled up a foot high across some parts of the 80-metre bridge linking Phnom Penh to a gawdy man-made entertainment island packed with restaurants, fairground rides and exhibition centres.

Hundreds of onlookers endured the stench of rotting garbage and tip-toed across the trampled grass to get a glimpse at the place where so many died.

Many people sat in silence on the steep banks of the Tonle Sap, a tributary of the Mekong River, listening to the chanting of hundreds of Buddhist monks who laid flowers and lit incense to bless the dead.

Flags were flown at half mast across the city of about 2-million people, which swelled during the festival as hundreds of thousands flocked in from surrounding provinces for the festival marking the end of the rainy season.

Television repeatedly showed footage of shirtless, shoeless bodies laid out on the ground and on hospital floors, many open-eyed and covered in bruises.

Relatives of the dead wept at the Khmer-Soviet hospital, where more than 100 unclaimed and unidentified bodies, most of them teenagers, lay side-by-side, covered in white sheets.

“I didn’t feel safe on the bridge, there were just too many people, so I crossed just in time,” said Bothra Cheahcha, whose friends were among the dead.

“It’s tragic and I was so lucky,” he said. “I feel like I’m reborn, like I have been given a second chance at life.” — Reuters

Over 100 pilgrims dead in stampede at Indian festival