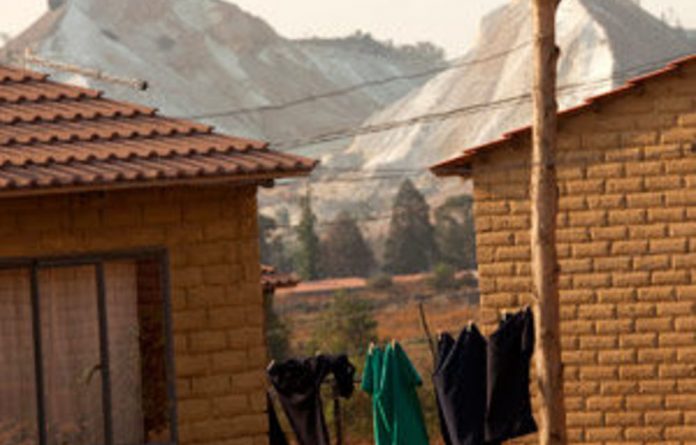 Mine waste is everywhere. From cities to towns to farms to nature reserves, polluted water and air have landed on the doorsteps of millions of South Africans.

Does it have to be this way?

Little planning went into the mining camps that quickly transformed into some of the country’s major cities and towns, most notably Johannesburg. Upon discovery of gold on the Witwatersrand, disorganised migrant labour settlements were hastily set up, while schools, clinics, or other infrastructure were of secondary importance. The neglect by both the British and apartheid governments of these populations that minimal services were not improved. With gold mines closing, cities were left behind, often still inadequately serviced and with unremediated mine dumps to remind residents of the industry’s legacy.

Beyond fate and history, critics contend the current government is complicit in allowing houses to be built — or even building them of their own accord — in areas where there are environmental and health concerns. Newly built Reconstruction and Development Programme (RDP) houses dotting the townships of Kagiso, Gauteng, sit metres away from the polluted Lancaster Dam, deemed radioactive by the National Nuclear Regulator, as well as several large mine dumps. A similar scene can be found in Soweto: freshly-painted, orderly RDP and sub-economic housing sit below some of the city’s largest dumps, the white-gold glare a constant presence.

According to environmental activist Mariette Liefferink, the government is “building RDP houses adjacent to [mine dumps], they are allowing places to be built next to polluted dams, even Robinson Lake”. The lake, located in Gauteng’s West Rand, has 40 000 times the background uranium levels, with a pH of two. With funding from Standard Bank, the Amberfield Retirement Home was built just 500m away from the site and across the road from a large mine dump.

According to Liefferink, the development was approved by the local municipality despite the fact that “there was no risk assessment done, there wasn’t even a basic assessment done. It was a completely improper development”. Today, as a result of public pressure and media reports fuelled by Liefferink’s concerns, Amberfield is closed, and none of the properties have ever been occupied.

Amberfield is not an anomaly.

“Government is letting this happen and people are moving in without knowing that there’s anything wrong.”

You’re not alive, just a moving corpse
Israel Mosala, a Soweto resident and member of EarthLife Africa, says that communities don’t complain about poor development because they are desperate for housing. “I spoke to someone who had just been given a new house in Braamfischerville [near a mine dump], and I said to him ‘OK, you have a house, but you have no health. How are you going to enjoy your house, your life, with no health? You’re not alive, just a moving corpse.’ … There are kids who are always coughing, and the suspicion is the mine dumps next to them. But when you’re frustrated they just take anything because of your situation.”

Mixed feelings are common among South Africans struggling to find adequate housing, but many are concerned with reports of high cancer rates stemming from mine waste. Christopher Nodada, who lives in Bheniville, Soweto, a new sub-economic development on the banks of a mine dump, is grateful for his new home. “They’ve removed the shacks. The structure of the place is better. People are moving in all the time,” he says.

Still, “sometimes there are explosions from where they’re re-mining the dump. Everything in the house shakes. The dust is forever a problem. You can’t work when there’s dust.”

Phindile Msibili lives in an RDP development in Kagiso. “I was excited because I have a house, but not about the place,” she says. “There’s no shops, no clinic … there’s nothing here.”

“There are other places that they could build houses for us, so why here?” Msibili continues. “There is water here. If I’m [in my house] and there is dust, I cannot see my neighbour’s house. I have bad eyes and I cough. They must find another place to put us.”

Residents and activists claim that corruption and ill-advised government officials mean that poorly-sited houses are built. “We want to move, but we don’t have any place to go,” says Mary Smith of Kagiso.

‘Why are they approving housing on a radioactive site?’
“This is where the government has put us. It’s council’s problem. The government is corrupt.”

Mabule Mokhine, a EarthLife Africa volunteer who lives in Soweto, says that the local government “has interests that have nothing to do with the health and safety of the communities … why are they approving housing on a radioactive site? There’s no signage … there are gross transgressions on the part of the gatekeepers which raises the question ‘why’? And if you follow that question then you come head-to-head with the politics. There’s a lot of personal interests that gets political buy-in, and that’s why you build houses there.”

Mokhine argues that greater community participation is needed to ensure those living in contaminated areas are given a larger say.

While public participation processes are legally required before any development can take place, Mokhine says these are flawed. “It’s usually just to say ‘we did it’. Because when you look at the outcome, at where these places are built and what’s in the final report, they’re incongruent with most of the stuff that came out of [those] processes.

“The communities should be saying either yes or no,” continues Mokhine. “The law states that there must be a 500m barrier between damaged sites and houses, but that’s just a minimum.”

Regardless of who’s to blame, Rianna Teule of Greenpeace Africa says the government needs to take a larger role in educating communities about their surroundings. “People are living on [mine] tailings, not being aware that they’re basically surrounded by toxic waste. The government is not trying to make a solution for that or finding a different place to live for those people or making them aware that they might not drink the water.”