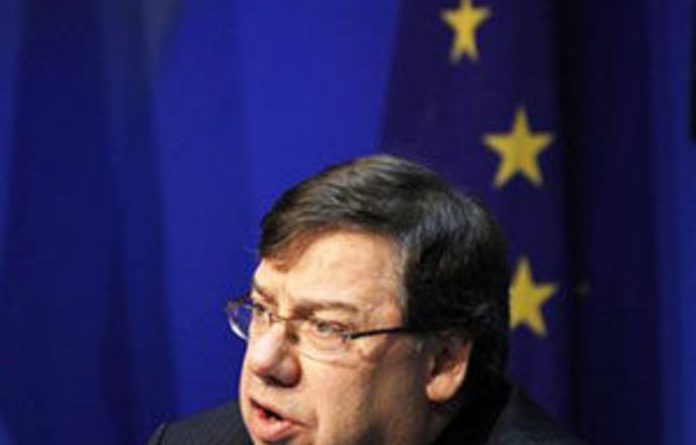 Irish Prime Minister Brian Cowen faced a backlash on Monday for agreeing the European Union-International Monetary Fund bailout for his debt-laden nation, amid outrage at what opposition politicians and the press condemned as a “sell-out”.

Cowen insisted the €85-billion bailout was the “best deal available” for Ireland and will help shore up its banks, allowing his government to continue operating without imposing further tax rises or spending cuts.

But the main opposition Fine Gael party called the agreement “appalling”, insisting the 5,8% annual interest rate on the loan was unaffordable and condemning plans to raid Ireland’s pension fund reserves to help pay for it.

“This is a hugely disappointing result for the country. It’s hard to imagine how this deal could have been much worse,” said Fine Gael finance spokesperson Michael Noonan.

“People are right to feel frightened, and worried about the future, when our own government has sold out the country on such lousy terms.”

Opposition parties have demanded Cowen quit over the crisis hitting the former Celtic Tiger economy, but he says he will not call an election until early next year, after lawmakers pass a forthcoming budget.

The December 7 budget will outline cost-cutting measures for the first year of a four-year plan to save €15-billion by 2014.

The austerity plan sparked mass protests in Dublin on Saturday but Cowen says it is a vital pre-condition to the bailout.

Labour party leader Eamon Gilmore said the deal struck with the European Union (EU) and the International Monetary Fund (IMF) and announced in Brussels on Sunday was “a national sell-out”.

“This is a sad and sorry day for our country and the direct result of Fianna Fail [Cowen’s party] mismanagement and irresponsibility,” he added.

Sinn Fein leader Gerry Adams called the rescue package a “terrible deal” and said plans to raid the National Pension Reserve Fund to pay for Ireland’s €17,5-billion contribution to the EU-IMF loan facility were a “disaster”.

‘Pure fantasy’
Irish newspapers also rounded on the agreement on Monday, saying it would saddle the Irish people with unsustainable levels of debt.

“Sold down the swanny”, headlined the Irish Daily Mail, while the Irish Examiner said: “Instead of rescuing the state, it could scuttle it.”

The Irish Sun added: “It is pure fantasy to think the Irish people can afford to pay this bill. The taxpayer is being saddled with all the pain, while the bondholders get off scot-free. It is scandal, pure scandal.”

However, the Irish Times backed Cowen’s position and said the bailout agreement was “a difficult but essential deal”, while the Irish Independent said: “We will face years of hardship but it is well to know the worst.”

The governor of the Central Bank of Ireland, Patrick Honohan, defended the package, saying it “underpins a clear economic and financial policy path”, while the Irish Business and Employers’ Confederation also supported it.

Tourism Minister Mary Hanafin said the interest rate was lower than Ireland would pay if it borrowed on the financial markets, where sliding investor confidence has sent the cost of Irish government bonds soaring in recent weeks.

“It gives us money at a cheaper rate than we can get anywhere else. The last time we went to the markets in September it cost us 6%. At the moment those very same markets would be charging up to 9%,” she said.

The big question now is how the markets respond to the bailout, amid fears that the crisis over Ireland’s debt will spread to other heavily indebted eurozone countries such as Portugal and Spain.

Fine Gael enterprise spokesperson Richard Bruton warned that if the terms prove too tough for Dublin, it will be the EU that ultimately suffers.

“If Europe sets a cliff too steep for Ireland to scale it won’t solve its own problems no more than Ireland’s,” he said. — AFP