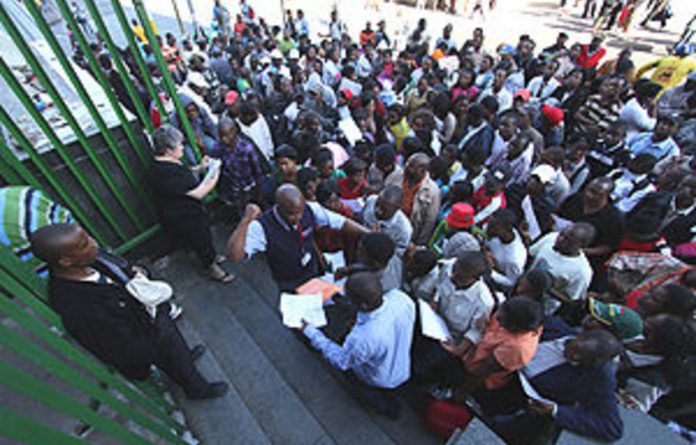 In a move to alleviate the panic among those who fear losing everything if they submit their fraudulent South African identity documents, Home Affairs Minister Nkosazana Dlamini-Zuma said Wednesday that Zimbabweans who have been living in the country for years on fake South African IDs — and have bought property and started businesses — would be legalised, if they make the 31 December deadline.

She said Zimbabweans who have fake South African IDs with the same name and photograph as their Zimbabwean documents, and which also correspond with papers such as banking, business or property documents, will be assisted by the police with an affidavit that will allow their properties and businesses to be transferred to legal documentation.

She was accompanied by Zimbabwean Home Affairs Ministers Theresa Makone and Kembo Mohadi, who were in South Africa to ask for help in handling the volume of paperwork flooding their offices.

Dlamini-Zuma also said those who applied for passports in Zimbabwe but had not received them in time for the deadline would be considered as being “inside the shop or bank when the doors close”, adding that the Zimbabwean authorities would submit the database of passport applicants still being processed on deadline day to the DHA. But the department isn’t backing down on the recent statement that there will be no extension for Zimbabweans who fail to meet the December 31 deadline.

“Those who do not comply will face immigration laws — this means we arrest,” Ronnie Mamoepa, the department of home affairs spokesperson, said.

Those who work with migrants say the policy will result in a return to mass arrests, detention and “fruitless mass deportations”.

“You’ll also see a return to tens of thousands of spurious asylum claims as people try to get a hold of some kind of documentation,” said Loren Landau, director of the African Centre for Migration and Society (ACMS).

The applications
According to home affairs, between September 20 and December 1, 99 435 Zimbabweans applied; of these there are 64 980 applications in progress and 34 455 have been finalised.

With estimates of the numbers of Zimbabweans living in SA ranging between 1,5 and 2 million there is a long way to go.

Landau said the deadline wasn’t realistic and he believed only 5% of that number would receive work and business permits.

The process is open only to those Zimbabweans who are working, studying or doing business in South Africa says Mamoepa, and the documents they will receive “must last at least four years”.

He emphasised that the deadline, set by the Cabinet decision for the deadline would not be extended. “What is critical is to get people to get their applications in long before the 31st.”

Zweli Mnisi, the spokesperson for the department of police, said they would work closely with home affairs.

“It is not our stance to criminalise law-abiding foreign nationals in South Africa,” Mnisi said, but added that during police operations, and in daily policing, they will continue to search those who were here illegally, whether they were from Zimbabwe or any other country. But activists say recent raids, such as the one in Hillbrow during the police’s Operation Duty Calls campaign, had raised some concern.

“The presence of the home affairs officials at the raid clearly indicates that there was an intention to arrest, detain and potentially deport non-citizens,” said Landau. “While this raid was part of a broader crime-fighting initiative, it’s evident that the police want to send a message to the citizenry and to foreigners that they are seen as criminals and that their presence is not going to be tolerated.”

The progress
At the home affairs offices in Plein Street in Johannesburg late on Tuesday afternoon there was a queue of more than 80 Zimbabweans, who had already applied for permits but were back to check on progress.

At the back of the line was a young man who has been living in the country for two years. He had received an SMS on Friday to collect his documents, which he submitted on October 18. He said he had applied because he had just finished his studies and was now working.

“It was efficient but, here and there, there were delays. But we can’t really complain. We understand there’s a lot of congestions, there are a lot of ­people,” he said.

Lack of procedure
However, Kaajal Ramjathan-Keogh, chairperson of the Consortium for Refugees and Migrants in South Africa (Cormsa), said the process had been poorly managed and there were no uniform procedures.

“There are no clear guidelines on what is required and different offices have different requirements. There is no certainty in the process.”

Another problem, said Ramjathan-Keogh, was the more than 30 000 applications for passports sent to Zimbabwe.

One Zimbabwean woman, who did not want to be identified, said she had been living in South Africa for the past five years and was working as a domestic worker. She said she was still waiting for her passport to enable her to apply for the special permit.

“I do have a passport, but it expires on January 5,” she said. “I was told that I need a new one because this one expires very soon. I applied for my new passport three weeks back and they said it will take six weeks.”

She said a passport cost R800 and she had not had enough money to apply for it earlier. She said she was very scared as she did not know what will happen next year. Many of her friends who had applied for both passports and permits had still not received them, even those who applied six weeks ago.

“My older brother has applied for the permit and is still waiting. I do not know anyone who has received the permit. I do not know what’s going on.” She said if she had not been able to apply for a permit by the time the deadline expired, she would have to go back home. “There’s nothing I can do, I’ll go.”

The situation leaves those who work with migrants questioning the intention behind the September decision to grant Zimbabweans the opportunity to apply for the special permits.

Roni Amit, a senior researcher at ACMS, said: “The fact that they are so adamant about not extending the deadline suggests that this was not really a way to regularise the status of Zimbabweans. Instead, it seems to be a cosmetic measure aimed at justifying the resumption of arrests and deportations.”