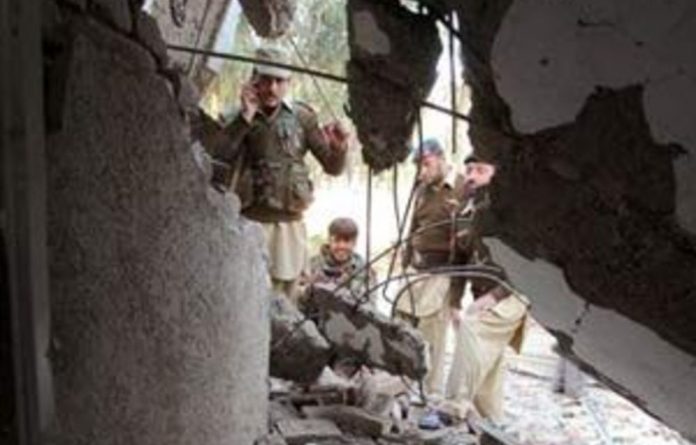 Suspected Taliban suicide bombers killed at least 40 people at the office compound of a top government official in northwest Pakistan on Monday, demonstrating the ability of militants to strike high-profile targets in defiance of army offensives.

“There were two bombers. They were on foot. The first blew himself up inside the office of one of my deputies while the second one set off explosives when guards caught him,” said Amjad Ali Khan, the top government official in Mohmand region, who appeared to be the target of the attack.

They were dressed in paramilitary uniforms, he said.

But they often melt away during assaults on their strongholds to set up operations elsewhere or wait patiently to return.

“Whenever you put pressure on them, they fight back and this phenomenon will not be over in days. They will strike whenever they will get a chance,” said Mehmood Shah, former chief of security in Pakistan’s tribal regions, home to some of the world’s most dangerous militant groups.

Hospital officials said 60 people were wounded in the attack in Mohmand, one of the lawless tribal regions in Pakistan’s northwest.

Fragile economy
Pakistan’s Taliban militants have staged suicide bombings in a bid to destablise the US-backed government, which faces an array of problems from a fragile economy to growing discontent over an energy crisis.

Pakistan Taliban spokesperson Omar Khalid said the group carried out the Mohmand attack, saying it was in response to what he said was the Pakistani government’s recent decision to hand over Arab militants to the US.

“The blasts destroyed many rooms in the compound and our reports are 40 people were killed and many wounded,” a senior security official in the region said.

When the bombers struck, Khan was holding talks with tribesmen on the need to strengthen militias helping the government fight militancy, said Mohammad Ghaffar, one of his deputies.

“I entered the compound. I heard a blast. I fell down, got up and then another explosion happened,” said witness Ishtiaq Ahmed, from his hospital bed in the city of Peshawar.

“People were shouting and some paramilitary soldiers fired in the air. I saw charred bodies.”

Aside from its struggle against homegrown militants, Pakistan faces US pressure to eliminate Afghan Taliban militants who cross its border to attack Western forces in Afghanistan.

Their calls for holy war can appeal to young men who have yet to see the state deliver schools and jobs.

“It’s a question of civil institutions, a question of economic growth, a question of making all the elements of society stronger,” he told a group of journalists in Pakistan’s commercial capital Karachi, where officials say militants enjoy safe havens and benefit from funding networks. A suicide car bombing on November 11, claimed by the Pakistan Taliban, brought the fight to the doorstep of elite counterterrorism police in Karachi. The blast demolished the headquarters of an investigation department, where militants were interrogated. At least 18 people were killed.

The challenge in the northwest was highlighted by Munter’s predecessor Anne Patterson in a February 21, 2009 diplomatic cable released by WikiLeaks. She predicted it would take 10-15 years to defeat a “witches brew” of militants there. — Reuters