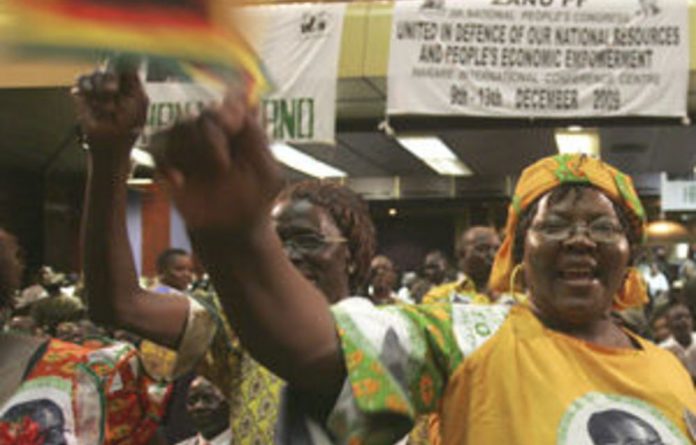 President Robert Mugabe’s Zanu-PF, which has long cast itself as the party of the poor, has begun reaching out to big business in the hope of winning its support and financial backing.

While Zanu-PF counts many of the country’s wealthiest among its members, it has never publicly reached out to large businesses, which have long been seen as a bedrock of financial support for Morgan Tsvangirai’s MDC.

Now Zanu-PF has begun a charm offensive to wrest this ground from the MDC and get those involved in business to open their wallets.

On Wednesday, the who’s who of Harare’s business sector gathered at a conference hall in Harare’s plush Borrowdale suburb, far from Zanu-PF’s usual rural haunts.

For an audience with vice-president Joice Mujuru, listed on the programme as “guest listener”, each executive paid hundreds of dollars to the organisers.

Over sandwiches, croissants and tea, senior executives from the country’s largest banks, mines and industries exchanged exaggerated laughter and light banter with top members of the Zanu-PF politburo.

At the meeting, dubbed “Business Talks to Zanu-PF”, Mujuru and other senior Zanu-PF members sat behind a table and listened as business executives moaned about the state of the economy, while taking care not to lay any direct blame on the party.

Sensing the tension between the two groups, organiser Ray Kaukonde, a wealthy Zanu-PF supporter who has interests in agriculture and runs the Spar franchises, stood up to goad the cowering businesspeople into frank discussion.

Relations with business people
Zanu-PF spokesman Rugare Gumbo said the meetings were meant to give business people access to senior party leaders so as to influence policy. But there is little doubt Zanu-PF would like to see the business elite do much more than that.

Zanu-PF chairperson Simon Khaya Moyo told the businessmen: “You have always been a major source of funding for us. Not because you were compelled to do so, but because you felt you had a duty to see the party move forward for the benefit not only of yourselves, but our people.”

Last week, at a Harare hotel, Zanu-PF attracted a full house at a fundraiser, where the entertainment came from a choir singing Mugabe’s praises.

According to Noah Mangondo, who heads Zanu-PF’s fundraising committee, the dinners “provide a platform for those wishing to partner with Zanu-PF to come forward and participate”.

The party wants to raise at least $3-million to host its conference next week, and by last week, had raised more than half that amount from donors, Mangondo said.

At the Zanu-PF conference, companies will pay the party to exhibit at an expo that will run alongside the meeting.

“It is a great opportunity for companies to market their products,” Mangondo said.

Many businessmen have a lot riding on Zanu-PF remaining in power and, for them, declaring public loyalty to Mugabe is good for business.

One of them is Philip Chiyangwa, a brash property baron who claims a distant relationship with Mugabe and was once arrested on allegations that he had sold Zanu-PF secrets to South African spies.

“I have assets worth about $200-million. If it means selling everything to ensure that the MDC does not get into power, let it be,” Chiyangwa declared, handing a $100 000 donation to Zanu-PF.

According to Chiyangwa, Mugabe is a “selfless leader” who should be “the life president of this country”.

For all its socialist mantras, Zanu-PF is a major player in the business world and on the Zimbabwe Stock Exchange, where it has a large investment portfolio.

Through a maze of investment vehicles, most prominently Zidco Holdings and M&S Syndicate, it has interests ranging from banking and insurance to hardware, catering and tourism.