I wanna be bad 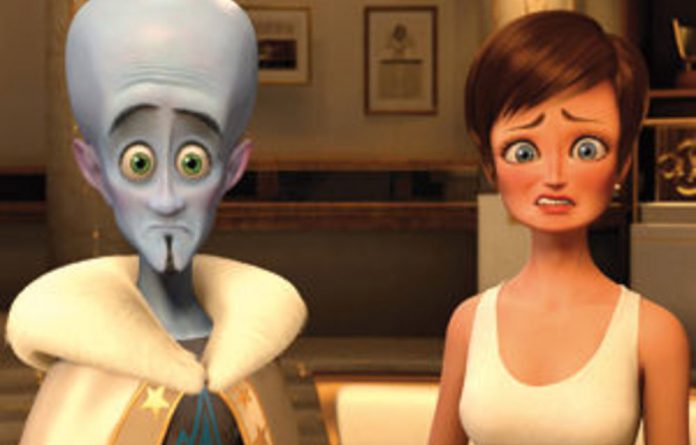 ‘The superhero movie will never be the same,” trumpets the poster for Megamind.

That seems an over-inflated claim, given the Hollywood movie machine’s ability to keep making movies that are very much the same as many that have gone before.

At least the claim stands, somewhat, for Megamind, though ultimately it conforms to the usual shape.

Megamind is about a blue-skinned, dome headed villain who has all sorts of nefarious plans for the destruction of the world or, failing that, a little light cosmetic damage.

His opposite number is a white-skinned, big-jawed superhero called Metro Man whose task in life is to foil Megamind’s iniquitous plans. In this they represent what structuralists used to call a binary opposition.

They also have a common past, going right back almost to birth, as the prologue shows us. They are like Superman and Lex Luthor, who in the Smallville TV series were provided with a youthful acquaintance and rivalry hitherto unknown to the writers of the comic books in which they were born or, for that matter, to the makers of the Superman films of 1978, 1980, 1983 and 1987.

The mega charm
Here Megamind is sending up the Superman story and superhero myths in general, and that’s part of its charm and intelligence.

It’s an animated movie and it’s in 3D, but it’s not an entirely dumb movie. It knows its ancestry in comic books and superhero movies and is able to put a new, fresh twist on the whole genre.

Megamind himself is a somewhat inept villain, which may lead one to imagine that sometime in the future, or before the end of the movie, he may have a change of heart — or at least realise that engendering evil is not necessarily his greatest competence.

At any rate, his villainy is generally presented as amusing, so there’s no great fear on the part of the audience that he will do anything truly awful. Until, that is, he does. But we are entitled to presume that anything awful that happens in an animated movie (death, for instance) can be easily reversed. Or else parents may have too much explaining to do to their kids when they exit the movie, and they may have to wonder about whether superheroism means there’s a God looking after us, and/or whether superheroes go to heaven when they unaccountably die.

Brad Pitt does the voice for Metro Man and Will Ferrell does Megamind; both work well in this context. Oh, and there’s an important damsel called Roxanne, too; she’s voiced by Tina Fey, and she’s rather nice, with manga eyes and extremely mobile eyebrows.

Visually, though, the most enjoyable and eccentric creature here is a fish called Minion. I thought him (it?) hilarious as well as, at a moment or two, touching.

As with so many American movies, Megamind is about a change of heart — that is, redemption.

Maybe it’s just part of a dream that we can be other than we are, and it’s so readily applied to every possible creature and person that it doesn’t really do anything except allow the film to wrap itself up with a feeling of some kind of moral triumph.

Really, though, that matters little. It’s only the latter quarter of the movie and the conclusion that become clichéd. For most of its running time, Megamind is highly entertaining, with plenty of jokes and much action.

It is animated with flair — the 3D even has some purpose beyond scarring your eyes: there are a few exhilarating Spider-Man-style careening through, over and across skyscrapers and so on, for instance.

It will certainly entertain the kids this festive season, and it has enough going on in it that the adults won’t have to take tranquillisers to get through it.