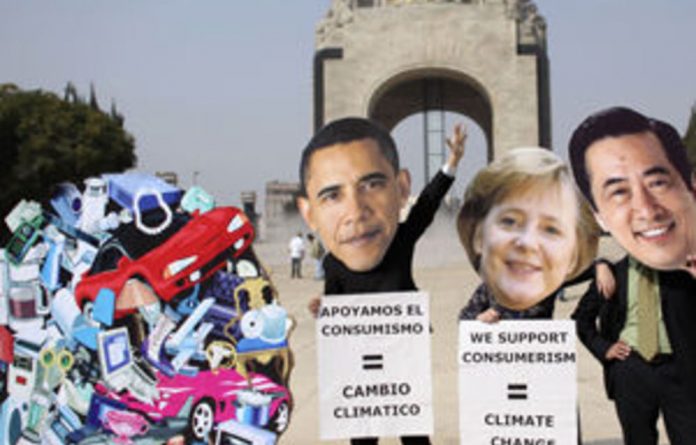 The biggest problem at the recent United Nations climate talks in Cancún was getting the United States on board, Edna Molewa, South Africa’s environment minister, said.

Molewa, interviewed after briefing the media in Pretoria this week, ascribed it to American domestic politics. “I don’t think there’s an unwillingness for the US to come to the party,” she said. “It’s just the political climate in that country makes it very difficult to pave a way forward, with the Democrats and Republicans locked in a power struggle.

The Americans will have to sort out their own domestic situation before we can move to the sort of agreement we need.”

Todd Stern, an American negotiator, echoed this. He told Bloomberg that “while there may be some kind of legal treaty down the road, that’s not happening, I think, any time soon”.

The Republicans, who now control the Congress, are hostile to any treaty that sets tough emissions targets demanded by other countries.

The Cancún talks, which ended last week, yielded a number of agreements, hailed as a significant step to keeping the talks alive.

SA taking over
All eyes are now on the follow-up conference in Durban late next year, which could deliver a legally binding deal. South Africa will take over the conference presidency from the Mexicans at these talks, which will take place under the UN Framework Convention on Climate Change.

Molewa said that South Africa was a “strong and authoritative voice” in Cancún and had played a significant role in moving the talks forward.

Molewa denied there had been divisions in Basic group (Brazil, South Africa, India and China), but said they constantly debated their differences and that South Africa would keep pushing the envelope.

“We are partners,” she said. “Every country had sovereign positions and differing opinions on some issues.”

A major disappointment at Cancún was that no targets were put on the table. It is hoped that the Durban conference will do this.

‘Cloud of mistrust’
Molewa said that when she arrived in Mexico there was a “cloud of mistrust” and that the conference was haunted by the failures of Copenhagen. “That cloud hung around until the middle of the first week, when we got the negotiations going,” she said.

South Africa, Australia, Brazil, China, Colombia, Egypt, the European Union, India, Japan, the Marshall Islands, Russia, the US and Venezuela were locked in talks on the last day of Cancún aimed at resolving the dilemmas of the Kyoto Protocol and forging a new treaty with legally binding commitments.

South Africa strongly supports an extension of Kyoto, while Japan and Russia want it terminated. Sources said the South African delegation also played a critical role in persuading Japan to drop the Kyoto issue for the time being and concentrate on the bigger picture.

The South African delegation is very complimentary about how the Mexicans steered the conference, in stark contrast with the cloak-and-dagger style of the Danes in Copenhagen. “The Mexicans guided a transparent process run in accordance with UN rules that built confidence and established an atmosphere of trust and cooperation,” Molewa said. “This is an important achievement and laid a solid basis for South Africa.”

Alf Wills, South Africa’s lead climate change negotiator, said an important lesson of Cancún and Copenhagen was that the world would get the treaty it was ready for. “We want a legally binding agreement,” Wills said, “and in our view you get that first and establish the rules later. Many other countries want to set the rules before committing to targets.”

He said South Africa would consult widely on what the world would accept, including holding informal meeting outside the UN’s official preparatory talks.

Although the build-up to Cancún was far more low-key than Copenhagen, the Mexicans held more meetings — and that paid off. “Thorough engagement with stakeholders is the key for Durban,” he said. “Once we have a good sense of the expectations, we can start to lobby.”