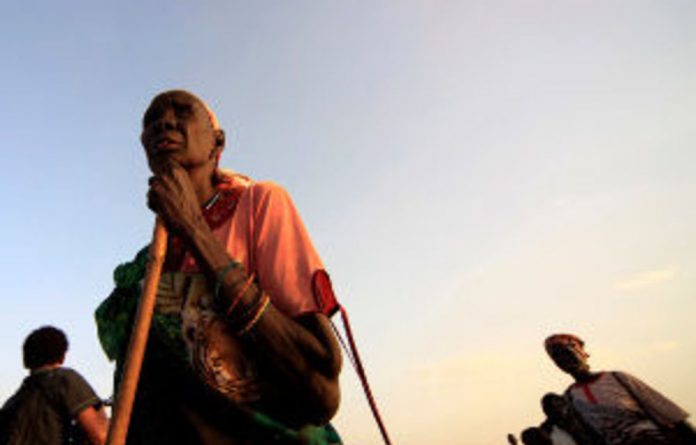 Look no further than Nigeria, the Democratic Republic of Congo, Algeria, Sudan and our own backyard to get a glimpse of what’s to come

Africa has often been compared to a gun, with Nigeria as its trigger. On closer inspection of the colonially inspired map, South Africa would be the muzzle, the Democratic Republic of the Congo (DRC) the barrel, Algeria the grip, and Sudan the bottom of the hammer.

If Afro-pessimists often depict the continent as a powder keg, Afro-realists recognise that the fate of these five countries will largely determine Africa’s future. South Africa is the continent’s largest economy, Nigeria its most populous nation, and Sudan, Algeria and the DRC its three geographically largest countries.

The five states are collectively rich in oil, gas, gold, copper and cobalt. And it is on these five pillars that our continent’s future will rest. The national and regional leadership of these countries, their capacity to promote stability (or instability) and economic integration in their respective sub-regions, and the “crisis of youth” that afflicts them will all shape Africa’s future.

South Africa
South Africa’s first two post-apartheid presidents, Nelson Mandela and Thabo Mbeki, both attended Christian missionary schools and are Anglophile Xhosas who greatly admired British culture and institutions. But, where Mandela ruled like a patriarch, leaving policy details to his lieutenants, Mbeki was a policy wonk who revelled in the mechanics of governance. Where Mandela was charismatic and popular among the masses, Mbeki relied on political manoeuvring within the ANC.

During Mandela’s presidency between 1994 and 1999, South Africa largely shunned a military role in Southern Africa for fear of arousing charges of hegemonic domination based on a sordid apartheid history of destabilisation.

Under Mbeki, South Africa led peacemaking efforts in the Congo, Burundi and Côte d’Ivoire. South African firms also fanned out across the continent to establish interests in mining, banking, retail, communications, arms and insurance. The country has been the largest single investor in the rest of Africa in recent years, and accounts for 80% of Southern Africa’s economic might. South Africa must thus lead integration efforts within the Southern African Development Community.

In the area of youth, the country’s commentariat has spilled much ink on the petulant behaviour of ANC Youth League leader, Julius Malema, whose organisation has traditionally played the role of king maker and will be closely watched at the next ANC leadership conference in 2012.

Nigeria
Nigeria has often been described as the “Giant of Africa” on account of its population of 140-million and large economic and human resources. The country is the world’s sixth largest oil producer, a large exporter of gas and accounts for 75% of West Africa’s economic strength.

But Nigeria has been dogged by massive corruption and visionless leadership. Elections in April 2011 must avoid the fraudulent practices of the past if West Africa is to achieve stability. Pax Nigeriana admirably led peacekeeping efforts in Liberia and Sierra Leone in the 1990s and must continue to promote regional integration through the Economic Community of West African States.

But Nigeria’s ability to continue to bankroll Ecowas and subregional peacekeeping has recently come under strain. Governance challenges also continue to bedevil West Africa’s Gulliver and it is unclear whether Nigeria will be a source of stability or instability in future.

Nigeria’s “crisis of youth” is evidenced by the armed militants in its oil-producing Niger Delta who have shut down a quarter of the country’s oil production and engaged in increasingly wanton acts of domestic terrorism.

Sudan
Sudan, Africa’s geographically largest state with nine neighbours, is a microcosm of the continent’s Afro-Arab diversity. But the country has been embroiled for five decades in a seemingly endless series of civil conflicts.

At the core of these crises lies a northern Sudanese elite, who sees itself as Arab and has, in recent times, adopted a jihadist ideology that has sought forcibly to Islamise other populations and subjugate them politically, militarily, culturally and economically. The simultaneous Islamisation and militarisation of society is reflected the military-religious alliance that seized power under General Omar al-Bashir in 1989.

Even as the war in South Sudan continued, rebellions also erupted over the government’s oppressive policies in Darfur, southern Kordofan and Blue Nile. Khartoum’s atrocities against its own citizens included al-Bashir’s jihad against the south in which at least 500000 people died. In the volatile Darfur region, about 300000 people have died since 2003.

A referendum next month will give the oil-rich south the chance to secede, which it is expected to seize, creating only the second new state in post-independence Africa since Eritrea in 1993. Unless cooperation between north and south is established, the potential of this conflict destabilising Eastern, Central and North Africa is extremely high.

Sudan’s “crisis of youth” stems from the rebellions that have used young people to wage war, and two generations of Sudanese have lived with conflict amid a massive proliferation of arms.

The similarities between Sudan and another large former British territory, Nigeria, are striking. Nigeria also has a largely Muslim north and largely Christian and traditional south, which were ruled separately under colonialism. Christian missionaries were excluded from both northern Sudan and northern Nigeria.

The British Raj left the north of both countries with built-in political advantages. In both cases, the political systems of the newly born states soon collapsed into civil war under the weight of their historical contradictions. Sudanese politicians’ use of murderous militias in Darfur and other provinces mirrors Nigerian politicians’ use of militias in the volatile oil-producing Niger Delta – in both cases, cynical pseudo-scientists have created Frankenstein monsters that spiral out of their control and develop an independent life of their own.

In both Sudan and Nigeria, military messiahs and profligate politicians have squabbled over the spoils of office, using political power to acquire personal wealth, with the corruption fuelled by the discovery of oil. Ruling parties in both countries are effectively conglomerations of opportunistic local barons and godfathers with no ideological glue besides their incredible greed and lust for power seemingly holding them together.

The DRC
Meanwhile, Africa’s Great Lakes have become infested with ethnic crocodiles of the genocidal species. The conflict in the DRC since 1998 involved seven foreign armies and a myriad militias and mercenaries in a state that was destroyed by the kleptocratic 31-year misrule of the Western-backed Mobutu Sese Seko.

Mobutu sought to play the role of peacemaker in Angola in the 1980s despite having supported the psychopathic warlord, Jonas Savimbi, for more than a decade. About three million people have died in the DRC in the past 12 years.

A United Nations mission in the DRC has helped to stabilise the country (as the world body had done between 1960 and 1964), though instability continues in Orientale and Kivu provinces. But the potential of the Congo – based on its size, strategic location and natural resources – to play a leadership role in the Great Lakes region, as Nigeria has done in West Africa and South Africa in Burundi and the DRC, has been diminished by the state’s decay into a carcass on which neighbouring vultures such as Uganda and Rwanda have feasted.

The Economic Community of Central African States has thus been unable to promote economic integration effectively, and the DRC joined SADC in 1997 instead of leading its own Central African subregion.

The DRC has also suffered a “lost generation” of youths used as cannon fodder by ruthless warlords. Nevertheless, the country’s first election in 40 years in 2006 has brought some stability to large parts of the DRC. It, like Sudan, borders nine states, and peace on the continent will depend on stability in this huge country at the heart of Africa.

Algeria
In North Africa, oil- and gas-rich Algeria has been prevented from assuming its role as the natural hegemon of the Maghreb because of a bloody civil war after its military annulled democratic elections that Islamists were poised to win in 1991, resulting in more than 100000 deaths. An estimated 70% of Algeria’s population is now under 30 years old and the future will belong to its youth.

Algeria’s septuagenarian leader, Abdelaziz Bouteflika, has been dogged by reports of ill health and fraudulent elections, and many of his military supporters also represent an older generation.

Despite its domestic strife, Algeria has been an active peacemaker, hosting the end of the Ethiopia/Eritrea conflict in 2000. But the Arab Maghreb Union, created in 1989 to promote economic cooperation in North Africa, has become dormant because of the continuing friction in bilateral relations between Algeria and Morocco, particularly after the latter stole the former Spanish colony of Western Sahara in 1975, a theft condoned today by the United States and France.

Where to from here?
Africa’s five pillars face enormous challenges in achieving durable peace and promoting economic integration on the continent. Though the decision to freeze the map of the continent in the 1960s may have been wise in a sovereignty-obsessed era of insecure, unconsolidated states, today’s generation of Africans must muster the ingenuity to craft new regional arrangements centred around our five Gullivers.

Federations and regional trade blocs must be negotiated and territorial boundaries agreed on that in the long term better reflect the political, socioeconomic and cultural realities of a vast continent of 800-million citizens.

After detailed planning, African leaders and civil society activists must proceed to the ancient empire of Ethiopia – the seat of African diplomacy – and reverse the scandalous act of cartographic mischief inflicted by European statesmen who set the rules for carving up the continent at the Conference of Berlin 125 years ago.

Dr Adekeye Adebajo is the executive director of the Centre for Conflict Resolution, Cape Town, and the author of The Curse of Berlin: Africa after the Cold War (2010)