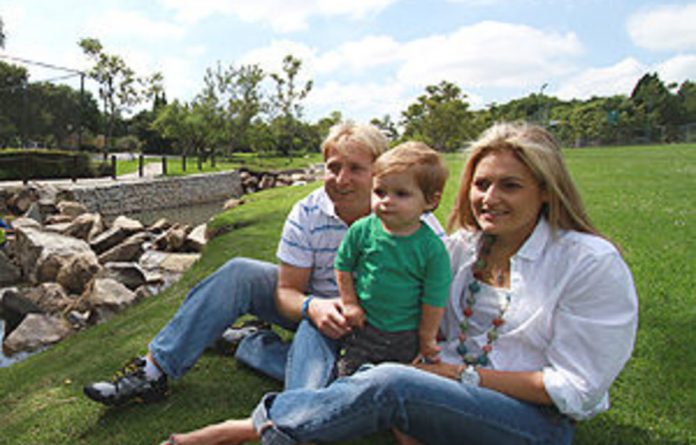 Nearly two miserable hours later I reach my destination — a town house in Sandton where Clint and Emma Lamont have been staying since their return to South Africa after a decade in London.

“We came back for the lifestyle,” Clint tells me. I am deadpan, thinking of the past two hours. But I know what he means — this country has a hold on people that is hard to define.

“I always wanted to come home and in the last year or so it really started to get to me.” He looks at Emma. “We talked about it for a long while, but I was always keener than her.” The turning point was the birth of their son, Nate, just over a year ago.

“Things were difficult for me,” Emma says. “It was then that I realised that we were really on our own living in London.”

“It wasn’t an easy decision career-wise,” Clint says. ‘”It was hard to find a job. But I wanted to come home long before the economic crash. And the feeling got stronger the older I got and the longer I stayed away.”

Emma is thoughtful. “The London experience displaces you. I went at 23 for a year for the independence and to see the world, and suddenly I found I’d been there for 11 years.”

Adds Clint: “We missed a sense of connectedness. I never felt like a British citizen.”

Returning home
They are part of a growing number of mostly thirtysomething South Africans who have returned to the country in the past two years. Exact numbers are hard to find but a recent CNN report quoted a British employment survey which found that about 100 000 South African job-seekers were planning to return home.

Stuttafords Van Lines says that 80% of their current business is “returning residents”.

“There’s a number of reasons. There are a lot of opportunities here, Europe is falling apart and then, of course, there’s the weather.”

John Herbst, the national sales executive of Pam Golding Properties, said that he had seen a number of South Africans who had let their properties no longer renew leases because they were returning from overseas to live in the country again.

Why is this happening? As the rental trends seem to indicate, and as the Lamonts point out, many returning South Africans never intended to emigrate, or perhaps went overseas for a while on contract.

Attractive SA
The HSBC Expat Explorer Survey of 2010 rates South Africa as the fifth most attractive place for expatriates to live in, behind Thailand, Canada, Bahrain and Spain — while the United States is ranked 16th and Britain 20th. About 24% of expatriates living in South Africa are retired.

Martine Schaffer, from the Homecoming Revolution, said that the shift began with the economic crash of 2008.

“We’d been working since 2003 and were going against the grain of the thinking at the time. The dinner party conversations were all about ‘where are you going?’ People didn’t have hope and people weren’t coming back.”

The CNN report estimates that up to 20% of South African professionals, almost exclusively white, have left the country since 1995 — a loss of about 800 000 people, from a white population of 4,5-million.

Schaffer said this year’s World Cup was a tipping point. “We were allowed to be proudly South African and many who came back for the World Cup marvelled when they came,” she said. But not all the returnees are white.

Durban-based Lucky Sithole said: “I’d been in London for five years on a contract that ended about the time of the World Cup. I wanted to come back and be part of the magic. And it was a good call. We live in a beautiful country and my friends and family were so embracing.”

The difficulties
Sithole said he had been on a roller coaster of emotion. “I lived in London for five years and got used to the independence there. Here I can’t survive without a car, the internet is much slower — little details like that are difficult to adjust to.”

But his biggest problem is that he hasn’t found a job. “I get discouraged sometimes, but I know it’s a bad time of the year and I’m positive I’ll find one early in 2011.”

He says that some in the black community questioned his move overseas. “There’s a sense from some people, especially those who don’t know me, that I’ve betrayed the country. They ask if I’m like those white people who think the country is unsafe.

“But I say to them, ‘If you had the opportunity to work overseas, would you take it?’ That usually shuts them up.”

Crime remains the biggest negative. Emma’s stepfather was murdered in April last year while they were deciding to return, and that nearly persuaded them to stay put. Clint points to the high walls of his gated community. “We would definitely not be here if we couldn’t live somewhere like this. My biggest concern is Emma’s safety.

“You can’t resolve that dilemma. We’ve minimised the risk, but when you come here, you know in the back of your mind that something will happen to you. You just hope that it won’t be catastrophic.”

Something fundamental is shifting in South Africa. Schaffer said: “When we started it was almost exclusively white, but now the mix has changed.”

For almost 50 years after World War II, the world and many South Africans themselves expected the worst of the country. The insidious legacy of swart gevaar (black danger) has deep roots and the failure of many African countries after independence — and the chaos in Zimbabwe — did not help.

It appears to be a generational thing. Those under 35 inhabit a different country from that of their parents.

Emma speaks for many of them: “Crime always worried me. But it was never my reason for going. I never felt insecure about South Africa’s future.

“The world has changed. After 2008 South Africans overseas began asking themselves: ‘What am I doing here?’ Those who come back are often excited by what they see, and the perspective they bring is important for the country.”

‘So far so good’ – IEC on expats voting

Dirco: Expats will be able to vote