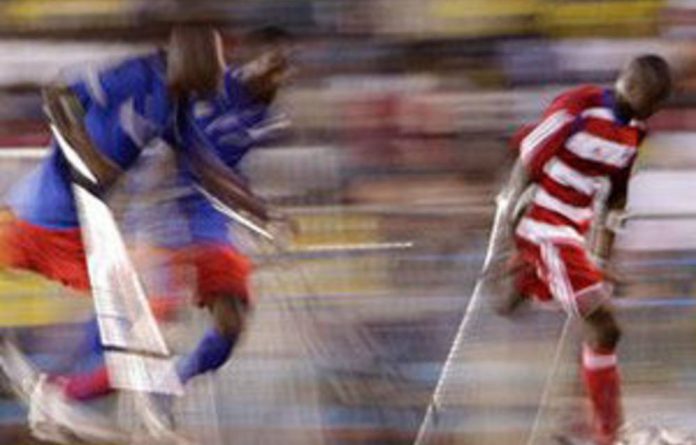 Sprinting on their crutches at breakneck speed, the young soccer players who lost legs in Haiti’s earthquake last year project a symbol of hope and resilience in a land where so much is broken.

Playing a weekend warm-up match days before the anniversary of the devastating January 12 quake, the players control the ball artfully with their good legs, avoiding “illegal” contact with their crutches.

The teams train on a dusty pitch near Cite Soleil, Haiti’s largest slum on the outskirts of the wrecked capital Port-au-Prince. They faced off again on Monday in the National Stadium as part of a low-key yet poignant commemoration of the disaster that killed around a quarter of a million people.

“Everything can’t get fixed after the earthquake but life goes on,” said Mackendy Francois, whose friends used a hacksaw to cut off his left leg below the knee when they freed him from the rubble of a shirt factory a year ago.

Thousands of people lost limbs in the earthquake, which left more than one million Haitians homeless and living in misery in the already poor, calamity-prone Caribbean nation.

He said he felt proud to represent his team against opposing side Zaryen, named after the Haitian Creole term for a tarantula because of the way the hardy spider keeps on going even after it loses a leg.

The players got treatment, athletic training and prosthetic limbs thanks to a joint effort by Miami’s Project Medishare and the Knights of Columbus, which committed more than $1-million to the prosthetics and therapy programme.

More than 100 young quake victims have been fitted with limbs in the programme so far and hundreds more will begin treatment in the coming weeks and months, Knights of Columbus senior vice-president Patrick Korten told Reuters in an email.

The soccer teams include some players disabled by birth defects and amputees from accidents unrelated to the quake.

Despite the uplifting example of the amputee players, initial hopes that a new, more successful Haiti could somehow rise from the rubble with international help are becoming clouded by a sense of pessimism and despair.

Even before the quake, about 70% of the 10-million people in Haiti, the Western Hemisphere’s poorest state, lived on less than $2 a day. Conditions for many now seem worse.

Zaryen midfielder Bernard Noubert, who lost both his parents in the quake in the same building where he lost a leg, said soccer has helped keep him going.

“It’s the best distraction for me to lighten my heart,” he said.

Low-profile commemoration
Despite billions of dollars in pledged aid and a generous outpouring of world solidarity for Haiti after the quake, the anniversary promises little in the way of celebration.

That may be due to a steady drumbeat of criticism from many quarters about how little has been achieved so far in trying to rebuild the capital city.

Major streets in Port-au-Prince have been mostly cleared of rubble and tent cities that once held more than 1,3-million people made homeless by the quake have slowly started to thin out. But debris still covers vast tracts of the capital and bodies are still being pulled from collapsed buildings.

Former US president Bill Clinton, the UN special envoy to Haiti who heads a reconstruction commission with outgoing Haitian Prime Minister Jean-Max Bellerive, has also faced criticism over the lack of tangible results.

Clinton is expected back in Port-au-Prince this week and is likely to call for patience in the grueling rebuilding task.

Commemoration events this week include a ceremony on Tuesday marking the reopening of Port-au-Prince’s restored Iron Market, a cultural and architectural landmark in the city’s downtown area.

Built by the French in the late 19th Century, the market with its ornate clock tower was badly damaged in the quake after a fire in 2008. Its restoration was funded by Irish-owned telecoms company Digicel, Haiti’s largest private investor.

But such schemes are of little interest to Anise Sainee, a 54-year-old grandmother who lives with her husband and 11 children and grandchildren in a tent in a crowded camp in front of the wrecked presidential palace.

She holds little hopes for a better future.

A strong stench drifted from nearby latrines and from a sewer in front of Sainee’s tent, with its corrugated tin roof and dirty plastic sheeting stamped with the words “US Aid from the American People”.

Nine months after the quake, a cholera epidemic hit Haiti and has since killed more than 3 600 people.

Even the November 28 presidential and legislative elections failed to give greater credibility to the government, with the outcome of the vote mired in uncertainty after widespread fraud allegations and sporadic street violence.

One reads “Aba Okipasyon (Down With the Occupation)” but it is not clear if it refers to the UN peacekeeping force in Haiti, the reconstruction commission co-chaired by Clinton or the army of foreigners involved in Haiti’s reconstruction.

Given this instability, it is not surprising that some Haitians hark back with nostalgia to the rule of Jean-Claude “Baby Doc” Duvalier, who from 1971 continued the rule of his late despotic father Francois “Papa Doc” Duvalier.

Sainee’s 62-year-old husband, Fedor Cine, lost his job as a street sweeper four years ago and is one of those who believes things were better in the Duvalier era.

“He was a real president,” Cine said of Jean-Claude Duvalier, who lives in France after being ousted by a popular uprising in 1986 — a rebellion that began Haiti’s still ongoing experiment with democracy.