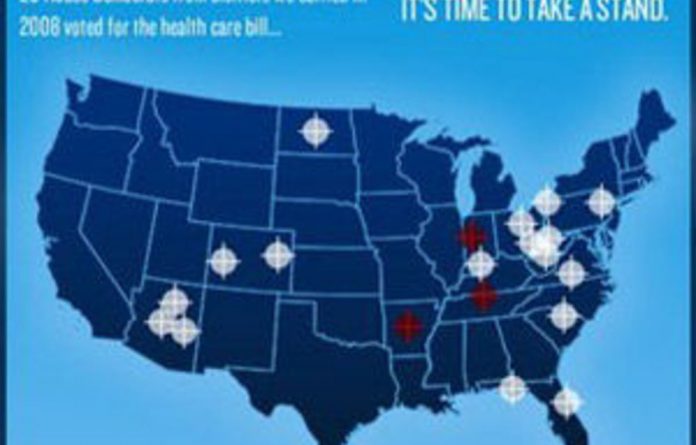 Until Saturday, it was a fair working assumption that Sarah Palin was just a few weeks away from announcing her candidacy for the presidency of the United States. Barack Obama launched his campaign in February 2007, a full 21 months before polling day in November 2008, making February 2011 the obvious time for anyone with an eye on 2012. But if Palin had pencilled an imminent date in her diary, she’s certainly rubbed it out now. Events outside a Safeway in Tucson have seen to that.

It’s not exactly fair. Palin didn’t pull the trigger that killed six people, including a nine-year-old girl, in Arizona and left a member of Congress fighting for her life. But politics isn’t fair. The cold reality is that the individual most politically damaged by the Saturday shootings is the former vice-presidential candidate turned reality TV star, bestselling author and all-round media phenomenon.

For proof, just imagine how a Palin presidential campaign would now unfold. Her fellow Republicans might steer clear of the Arizona killings in the primary phase of the contest but, if she somehow became her party’s nominee, she would be challenged constantly about a single image: the map she posted on her website last autumn dotted with 20 gunsight-style crosshairs over 20 congressional districts occupied by Democrats who had dared to vote for Obama’s healthcare reform — among them one Gabrielle Giffords.

Palin might try to argue that she wasn’t really targeting Giffords and the others, echoing the absurd attempt by one of her closest aides at the weekend to pretend those rifle sights were really “surveyor’s symbols”. But that won’t wash, not when Palin herself referred via Twitter to the “‘bullseye’ icon used two target the 20 Obamacare-lovin’ incumbent seats”. More importantly, there would be a potent witness ready to testify against Palin: Giffords herself. The most important 13 seconds of videotape could prove to be the clip, already running on a loop on American television, of Giffords complaining last autumn about that crosshairs ad, warning those behind such violent imagery to “realise there’s consequences to that action”. That statement, full of poignant prescience, can’t help but point a finger at Palin. If, as those around her hope and pray, Giffords survives, she would need to do no more than appear on a platform or in a TV ad in the 2012 campaign to indict Palin. She would embody in her very person the case that the former governor of Alaska lacks the judgement to be president.

Chilly, defensive response
Perhaps Palin could have overcome this obstacle, expressing deep contrition for the crosshairs map and vowing to join those calling for calmer, cooler public discourse. But her response since the shootings has deepened her problem. Her single public statement was chilly and defensive. It began, “My sincere condolences are offered —” a form of words that, one senior Democrat mused to me, looked as if “it had been drafted by a lawyer”, anxious not to say anything that read like an admission of guilt.

The result is that the Giffords shooting — and Palin’s statements before and after it – have seared into the public mind a version of the would-be president that alienates her from the moderate and independent voters crucial to any general election victory, aligning her with the most extreme elements of the Republican party. One former Democratic strategist noted the visual grammar of that target list of Palin’s: “Remember the instigators of those abortion clinic murders? They had a list and went down the list. This puts her in that camp.”

Is any of this fair? If it is true that, as one veteran political adviser puts it, “The crosshairs are now on Sarah Palin’s career,” is that just? There is much Palin could point to in her defence. The evidence is scant — so far — that the alleged gunman, Jared Lee Loughner, was a paid-up member of the Palin cult (if you doubt that it’s a cult, read a sample of her followers’ comments on Facebook). At first glance, he seems less the determined political assassin than a man in a dangerously advanced state of mental illness. If Loughner didn’t see Palin’s call to arms in the last midterm campaign, and developed his hostility to Giffords long before anyone had heard of the Alaskan huntress, then surely, her allies will say, she should escape any blame.

Language of combat
What’s more, Palin is hardly the first politician to use the language of combat. She could argue that anyone who has ever referred to “battleground” constituencies, talked of candidates “wounded” by “fatal blows” or arguments “shot down” is just as guilty as she is. In this, she could cite the unlikeliest examples. It was the sainted Obama who revved up a crowd in 2008 by declaring of his Republican opponents: “If they bring a knife to the fight, we bring a gun.” I know it’s not her style but, if Palin wanted to offer an international example, she might even mention Britain’s Liberal Democrats. Despite its long reputation as the cuddly party, the Lib Dems had a “decapitation strategy” in 2005, aimed at lopping off key Tory heads such as Michael Howard and Oliver Letwin. So why make Palin the villain?

Yet these attempts at exoneration go only so far. Even if Loughner is shown to suffer from extreme mental illness, he did not exist in a vacuum. Instead he lived in a climate that pervades today’s United States, and that exists with particular intensity in Arizona, in which political violence is glorified. Last year, Giffords’ Republican opponent held an event encouraging voters to join him and “shoot a fully automatic M16” to “help remove Gabrielle Giffords from office”. Congresswoman Michele Bachmann said she wanted voters to be “armed and dangerous” against Obama’s energy policy. On Fox News, Glenn Beck speaks daily as if on an underground resistance network, urging his audience to rise up against the wicked dictatorship that has somehow usurped power.

This is in a different category from Lib Dem talk of decapitation. First, it is taking place in a society in which many millions carry real, rather than metaphorical, guns. Second, it is not generalised rhetoric but directed at specific, named individuals: that Republican candidate urged voters to shoot an automatic weapon to get rid of Giffords. In this context, it is not hysterical to suggest some of this will have rubbed off on a disturbed young man such as Loughner. As Andrew Sullivan has pointed out, the gunman could have chosen anywhere for his rampage, but he chose a specific politician whom many influential people — including Palin — had already defined as a target.

By rights, then, those who have been stoking this fire should be shamed into changing their vocabulary. Yet the precedents are not encouraging. After the Oklahoma City bombing in 1995, Bill Clinton denounced the “loud and angry voices” who, he said, were guilty of “spreading hate and leaving the impression … that violence is acceptable.” Clinton’s response to Oklahoma revived his presidency, but it did not still the loud and angry voices: Rush Limbaugh was spewing vitriol then and he’s still doing it now. Obama goes to Tucson today: if he can do as well as Clinton, he will have done himself a great favour. If he can do better than Clinton, and make a lasting impact on the tenor of America’s public conversation, he will have done his country a great service. – guardian.co.uk