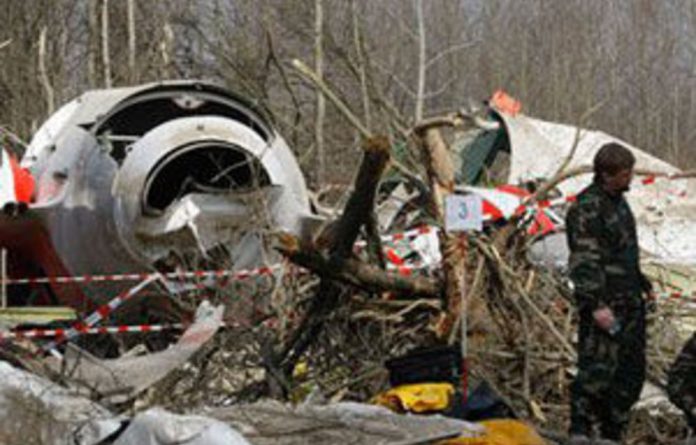 Kaczynski died with 95 others when his presidential jet crashed on April 10 2010, as it attempted to land in fog near the city of Smolensk in north-western Russia in Poland’s worst post-war tragedy.

In a damning report listing Polish shortcomings that risks sparking new tensions with Warsaw, the Russian probe included audio evidence that two top officials entered the cockpit to pressure pilots to land the plane as they did not want to annoy Kaczynski.

“The presence in the cockpit of high-ranking officials — Poland’s air force chief and head of protocol — and the expected negative reaction from the main passenger put psychological pressure on crew members and affected decision-making regarding the continuation of landing under any conditions,” she said.

‘Strong motivation’
She did not identify the “main passenger” but it appears she was referring to Kaczynski. However, the commission emphasised that no comment from Kaczynski himself ordering the plane to land was found on the black box recording.

“There was a strong motivation to perform the landing precisely at the airport of destination,” Anodina said.

The investigation’s technical chief, Alexei Morozov, said the navigator was heard exclaiming on the flight recording “He’ll go crazy!”, apparently referring to Kaczynski’s anticipated reaction if the plane did not land.

The commission played a harrowing excerpt from the flight recording, as the pilots debate whether to land and a computerised voice then repeats “pull up! pull up! terrain ahead!”. The recording then breaks off.

Anodina said that in the course of the flight, the crew “repeatedly received information about the absence of adequate weather conditions” from the Severny Airport in Smolensk and a crew of a Yak-40 plane that landed there earlier.

“Despite this, the Tu-154 crew did not make a decision to land at a substitute airport. This fact can be considered the start of a critical situation during the flight,” she said.

Anodina said experts also found alcohol of a concentration of 0,6 grams per litre in the blood of the Polish air force chief Andrzej Blasik, who was present in the cockpit of the plane along with head of protocol, Mariusz Kazana.

Meanwhile, the pilots operating the plane had “substantial deficiencies” in their training, Anodina added.

Landmark moment
The Russian-made Tupolev-154 was carrying Kaczynski as he prepared to attend a ceremony at Katyn forest commemorating the 70th anniversary of a World War II massacre of about 22 000 captured Polish officers by the Soviet secret police.

His attendance at the ceremony was considered a landmark moment for Kaczynski personally. In the past, he had been largely shunned by Russia for his perceived anti-Moscow sentiments.

Poland and its Soviet-era master Russia have had uneasy relations since the demise of Communism two decades ago. Yet Poles were struck by the level of public and official mourning in Russia following the tragedy.

But the crash and subsequent investigation have soon become highly politicised, with Polish Prime Minister Donald Tusk saying the draft findings of the Russian investigation unacceptable and riddled with errors.

To further add to tensions, Kaczynski’s twin brother and ex-prime minister, Jaroslaw Kaczynski, said he doubted that a body entombed in a Polish cathedral was that of his brother.

The final report was earlier handed “to the authorised representative of Poland via the Polish embassy in Russia”, the aviation commission said. — AFP