Cope to rebrand itself 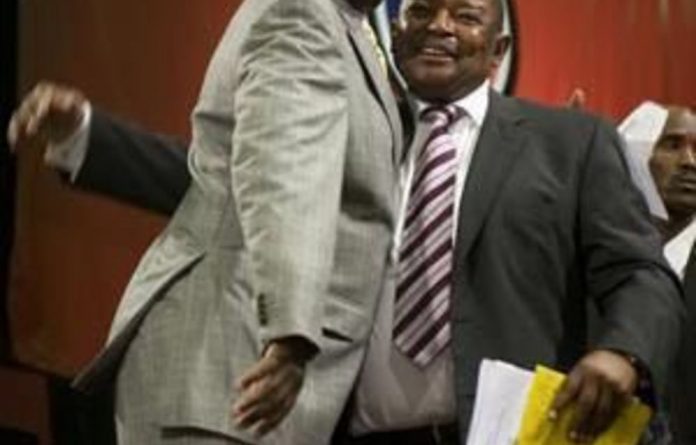 Cope would re-brand itself ahead of the local government elections, said co-founder Mbhazima Shilowa’s spokesperson on Saturday.

The rise and fall of Cope

Two years ago, the start of a breakaway party from the ANC was to many a dream come true. However, it has been a rocky road for the Congress of the People (Cope), and the party finds itself at a point where enthusiastic supporters and funders have lost hope for Cope and the party seems set to fade become another failed attempt to break the ANC.

The party would announce that there was no split in the Congress of the People, which has been marred by in-fighting since its launch in December 2008.

A bitter leadership battle between Shilowa and co-founder Mosiuoa Lekota has dominated headlines about the African National Congress breakaway group.

However Ngwema said the CNC had decided at a meeting in Ekurhuleni, east of Johannesburg, on Friday that the party needed to move on.

“There’s no confusion. There’s no split. There’s only one CNC which is the highest decision making body of Cope between congresses,” said Ngwema.

Its “immediate short-term programme of action” included repackaging “the Cope brand [and] prepare for the coming local government elections”.

It would also “look into the performance of Cope in Parliament” and “remodel” its operations in Parliament and provincial legislatures “where necessary”.

“Furthermore, the meeting decided to postpone the election of the rest of the CWC [congress working committee] members pending the strategy planning session which will inform our way forward,” added Ngwema.

Cope failed to elect a leader at a congress in Pretoria in December, after members of the Shilowa and Lekota factions disrupted proceedings.

The conference collapsed in a deadlock, with both factions claiming victory.

Rejoining the ANC
Meanwhile, prominent Cope members are heading back to the ANC, following what one called the “disastrous 2010” the breakaway party had last year.

In a further blow to the fledgling party a United States diplomatic cable leaked by WikiLeaks suggests former president Thabo Mbeki was intimately involved in the formation of Cope, particularly the drafting of policy documents.

Four former Cope members are involved in talks with the ANC to chart a way to rejoin the ruling party. They are former spokesperson Onkgopotse JJ Tabane, former youth leader Lunga Kepe, Andile Nkuhlu and John Ngcebetsha. All were formerly aligned with Shilowa.

Kepe, Nkuhlu and Ngcebetsha wrote a letter to Cope’s leaders in July 2009 urging them to hold an elective conference urgently. The request fell on deaf ears and during 2010 they left Cope one by one.

Rumours that Lyndall Shope, Cope leader in the Gauteng legislature, and Smuts Ngonyama, Cope’s head of policy, would also return to the ANC fold could not be confirmed this week.

Shope told the Mail & Guardian that such rumours peddled her name and Ngonyama’s to create an impression of instability in the faction of Lekota. Ngonyama could not be reached for comment. – Sapa and M&G reporter