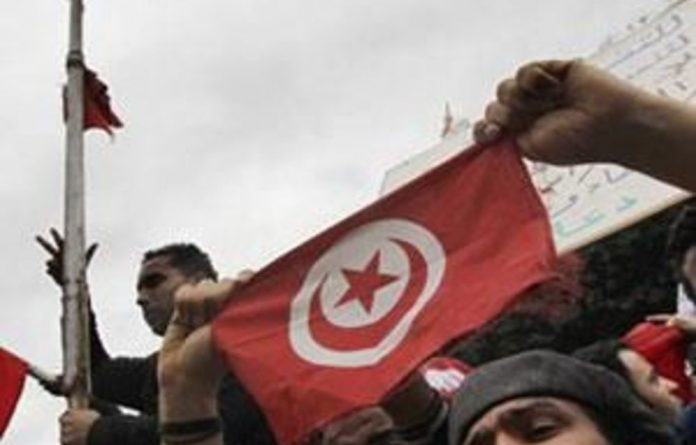 Hundreds of soldiers patrolled the streets of the Tunisian capital on Saturday where the prime minister was due to meet opposition parties to try to form a coalition after protests swept the president from power.

In a dramatic climax to weeks of violent protests against his rule, Zine al-Abidine Ben Ali, Tunisia’s president for more than 23 years, fled to Saudi Arabia on Friday and Prime Minister Mohamed Ghannouchi took over as caretaker president.

But it was not clear whether protesters, angered by poverty, unemployment and repression, would accept the technocrat Ghannouchi, prime minister since 1999, due to his close association with Ben Ali’s rule.

Ghannouchi confirmed reports that members of Ben Ali’s family had been arrested, but did not say who. He said it was a “provisional measure”.

Tunisian air space, closed on Friday, was reopened and the official news agency said all airports were open.

The Tunisian army was called on to the streets, as residents said groups were marauding through Tunis setting fire to buildings and attacking people and property.

A military helicopter circled over the city centre.

Looters
In working class suburbs, residents lined the streets with metal bars and knives to ward off looters.

Ghannouchi went on live television, via telephone, on Friday night to promise everything was being done to restore order.

He said he would meet representatives of political parties on Saturday to attempt to form a coalition government.

Ghannouchi said on Saturday would be “a decisive day”.

“I will meet representatives of political parties to form a government which I hope will meet expectations.”

One of those invited to meet Ghannouchi for coalition talks was Najib Chebbi, an eloquent lawyer who has long been seen by Western diplomats as the most credible figure in the opposition.

“This is a crucial moment. There is a change of regime under way. Now it’s the succession,” Chebbi told France’s I-Tele TV. “It must lead to profound reforms, to reform the law and let the people choose.”

Mustafa Ben Jaafar, head of the Union of Freedom and Labour party, told Reuters he and two other opposition figures were due to meet Ghannouchi on Saturday.

” …The most important thing is to get this country out of the impasse that it is in,” he said.

He said the other opposition figures invited to attend the meeting were Chebbi, and Ahmed Ibrahim, head of Ettajdid party.

‘Crucial moment’
“I salute the fact that groups of young people have got together to defend their neighbourhoods but we can assure them we will reinforce their security,” Ghannouchi said.

“We are at the service of the Tunisian people. Our country does not deserve everything that is happening. We must regain the trust of citizens in the government.”

He told Tunisians he would steer the state until early elections, but protesters said they might launch more protests.

“Tomorrow we will be back on the streets, in Martyrs Square, to continue this civil disobedience until … the regime is gone. The street has spoken,” said Fadhel Bel Taher, whose brother was one of dozens of people killed in protests.

The Eurasia Group consultancy said: “Although the streets of Tunis are calmer than they have been in several days, Ben Ali’s departure is not likely to immediately defuse tension across the country.

“If Ghannouchi does not announce a definitive timetable for new presidential elections, or if he does not form a transitional government with substantial opposition representatives in the short term, it could drive protesters back out in the street,” it said in a research note.

British Foreign Office minister Alistair Burt said the next 48 hours would be critical: “What we hope to see is Prime Minister Ghannouchi being able to gather significant figures around him to put together a coalition body which will take us through to what we hope will be free and fair elections.”

President Nicolas Sarkozy, who refused permission for Ben Ali to enter former colonial ruler France, has called a meeting about Tunisia for 11am GMT with senior ministers.

The violence and rapid turn of events sent shockwaves across the Arab world, where authoritarian rulers are deeply entrenched, but face mounting pressures from growing young populations, economic hardship and the appeal of militant Islam.

Western powers have long turned a blind eye to rulers in the region who provide a bulwark against Islamist radicals. The United States led international calls for calm and for the people of Tunisia to be given a free choice of leaders.

Hundreds of tourists have been stranded by the unrest. British tour operators Thomson and First Choice, owned by Germany’s TUI AG, said they planned to bring back all their remaining 1 400 customers in Tunisia on emergency flights.

Holiday operator Thomas Cook said it had operated six flights from Monastir on Friday bringing, back about 1 500 customers. The remaining 300 were being flown home on an emergency flight on Saturday.

The firm has also cancelled all flights to Tunisia due to depart on Sunday.

Tourism represents more than 11% of Tunisia’s hard currency receipts, as well as being an important sector for employment. In 2009, 6,9-million tourists visited Tunisia, hailing largely from Europe and North Africa. – Reuters