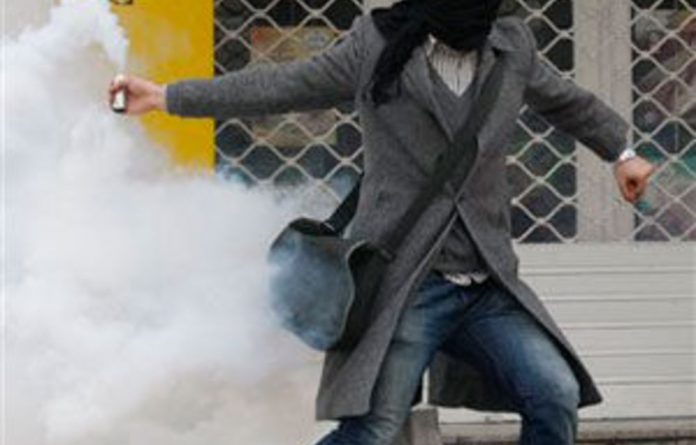 Police in Tunis repeatedly used tear gas in an attempt to break up a protest by several hundred opposition party supporters and trade unionists who labelled the new government a “sham”. Protesters would scatter, but then regroup to continue.

Abid al-Briki of the Tunisian labour union UGTT said its three ministers would withdraw from the government because it included members of Ben Ali’s RCD party.

“This is in response to the demands of people on the streets,” Briki said.

The ministers, who were given junior positions in the Cabinet, are Houssine Dimassi, nominated for the training and employment portfolio, and two ministers of state, Abdeljelil Bedoui and Anouar Ben Gueddour.

“The new government is a sham. It’s an insult to the revolution that claimed lives and blood,” said student Ahmed al-Haji.

“The problem with the interim government is it has a number of ministers from the old government,” protester Sami bin Hassan said.

Govt defended
Ghannouchi defended his government, saying some ministers had been kept on because they were needed in the run-up to elections, expected in the next two months.

“We have tried to put together a mix that takes into account the different forces in the country to create the conditions to be able to start reforms,” Ghannouchi told Europe 1 radio.

Ghannouchi rejected suggestions that the Ben Ali “dictatorship” would continue under a new guise.

His Foreign Minister, Kamel Morjane, said during a visit to Egypt that the interim government would respond to issues that had angered protesters, such as corruption, and would be preparing for new elections. “It may be possible that the next government will not have any member of the former government,” he said.

“The revolution must continue,” Marzouki, who went into exile after being harassed by Ben Ali’s intelligence services, said.

“Today is a great victory. It is magnificent to be in a free country,” said Marzouki, head of the small centre-left Congress for the Republic. “I, who fled, I was a fugitive, I am back in my country.”

The weeks of protests against poverty and unemployment in Tunisia that forced Ben Ali from office prompted fears across the Arab world that similarly repressive governments might also face popular unrest. — Reuters