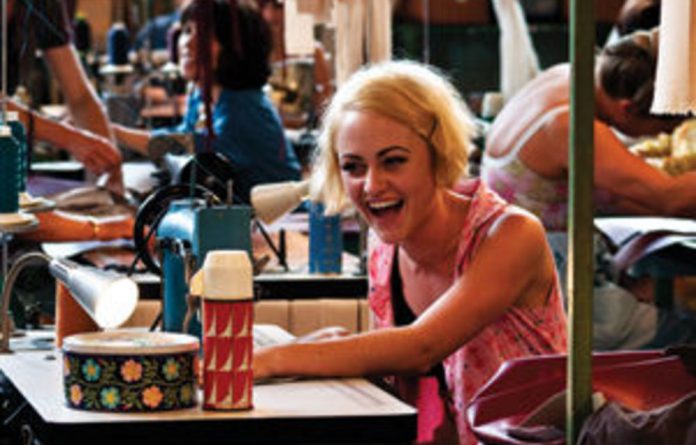 There could hardly be anything more exotic and unfamiliar in mainstream commercial cinema than the story of a successful strike.

But this is what screenwriter Billy Ivory and director Nigel Cole give us with Made in Dagenham, their broad, primary-coloured, good-humoured comedy ­- almost, but not exactly, a shop floor version of Calendar Girls (2003), also directed by Cole, the film about older women posing nude for charity.

Made in Dagenham is based on the Ford women car workers’ strike of 1968, during which female staff sewing seat covers for Cortinas and Zephyrs went on strike for the same wage as the men. This commanded headlines, galvanised the political debate and indirectly led to Britain’s Equal Pay Act of 1970.

It stars Sally Hawkins as Rita, confident and forthright as the ordinary working mom who finds herself elevated to the position of striker spokeswoman, battling not merely against the bosses but the smug chaps’ club in general: employers and trade unionists getting ready to stitch up a duplicitous compromise behind her back.

Miranda Richardson plays Barbara Castle, the Cabinet minister not-so-secretly sympathetic to the women strikers and exasperated by the ambiguous evasions of her own boss, Harold Wilson, played in cameo by John Sessions. Richard Schiff is excellent in the small role of the American Ford executive who must come over to Britain to sort out this costly pinko mess.

The original title for the film was We Want Sex, based on a real, chaotic mishap at the strikers’ Westminster demo, when the right-hand half of their banner reading “We Want Sexual Equality” collapsed, leading to much cheerfully supportive drive-by hooting and wolf-whistling, in which this movie participates.

The film itself is a bit sexed up. Much of the grimness and bitterness that you might associate with industrial action is gone and some of the women themselves are surely more glamorous than was the case in real life.

Jaime Winstone plays Sandra, a hot-pants-wearing striker who yearns to be a bikini model, and Andrea Riseborough is the sexually liberated Brenda: I couldn’t help remembering her acclaimed performance as the young Margaret Thatcher in the recent BBC4 drama, The Long Walk to Finchley, which, in a style similar to this, invites sympathy from audiences of all opinions, on the basis that fighting male chauvinism is an apolitical cause.

Made in Dagenham resembles a naughty Carry On film, especially when the women have to strip down to their smalls in the sweltering shop floor and their fatherly union rep (Bob Hoskins) gallantly covers his eyes with a cry of: “Oh my gawd!” There’s also something of Joan Littlewood here too; I wonder if director Cole considered casting Barbara Windsor as an older striker, to underscore this dual resonance?

I wish the film had not been marketed quite so aggressively with the “feel-good” tag. Some may find it a little saccharine and feel that it sticks a little too closely to the Calendar Girls template.

They are further, I think, entitled to be restive about the character of willowy and beautiful Lisa, played by Rosamund Pike, Rita’s supportive posh friend who happens to be married to the sexist Ford Dagenham boss (Rupert Graves) and even sends her son to the same school as Rita.

But there’s something else going on here. In its jaunty and insouciant way this movie is actually pretty subversive: a film about strikers who are not evil or deluded or indeed defeated? What an idea! Compare it with, say, Mark Herman’s Brassed Off from 1996: saving the colliery band is the key thing, but mine closures themselves are a given.

A year later, in Peter Cattaneo’s film The Full Monty — whose “period” infomercial sequence Made in Dagenham incidentally echoes — saving the unemployed men’s morale with a wacky striptease act is the key thing, but the lay-offs themselves are accepted.

In Stephen Daldry’s Billy Elliot, protecting Billy’s future in ballet is the vital point; the failure of the miners’ strike is uncontested and Billy’s dad must swallow his pride and break the strike for cash to help his son.

In all these films courageous and quixotic adventures are the heart warming and defiant exceptions to a general workers’ defeat, which is accepted as a grim basic fact, like the death from cancer that carries off Julie Walters’ husband at the start of Calendar Girls.

Made in Dagenham goes against the bittersweet/miserablist grain. The striking women achieve inspirational self-respect and they win their strike as well. And even given that this film is set in the period before Britain’s industrial slide, equal pay for women can hardly be blamed.

These women are shown teaming up and fighting effectively for a principle that is now a bedrock for all our workplaces. The film’s cheerful demeanour may grate, but it might not be far from the mood that the striking women thought it expedient to adopt at the time. Maybe feeling good isn’t that inappropriate. — Guardian News & Media 2011