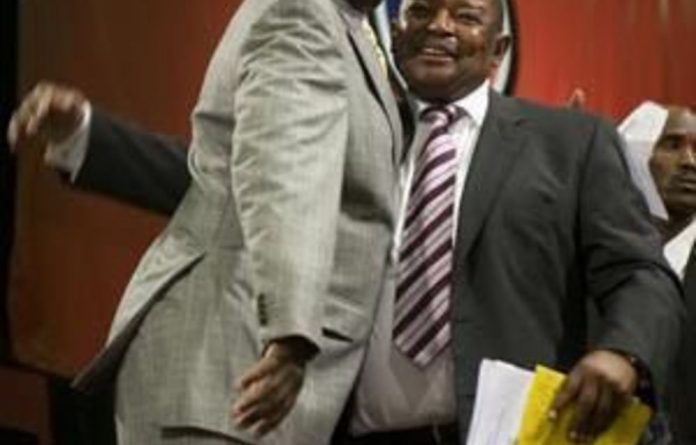 The Congress of the People appears to be riven with divisions after a weekend of sniping from opposition camps.

“The meeting deliberated on a number of key issues, following the sabotaged national elective congress held in December 2010 and the continued actions of a small faction of the party intent on destroying Cope,” said spokesperson Phillip Dexter.

He said that members of the CNC, elected at the party’s inaugural congress in Bloemfontein, who did not confirm their continued membership of the CNC, should no longer hold the positions.

He said these members — which include co-founder Mbhazima Shilowa — would be suspended from all activities of the party, pending a disciplinary hearing, to take place within the next 14 working days.

The charges these members would face included “disrupting the sabotaged national congress, impersonating leadership, undermining the CWC [congress working committee], CNC and the constitution of the party, abusing positions of leadership in the party including in the provinces and chapters of the party and other similar activities.”

Shilowa hit back on Sunday, saying his suspension was not valid as it had not been officially sanctioned.

Shilowa’s spokesperson Sipho Ngwema said co-founder Mosiuoa Lekota was being investigated by them because his faction may constitute a new political party.

“The office of the general secretary Nikwe Num will investigate whether or not the newly constituted structure as announced does not constitute a new political party,” he said in a statement.

“Cope would like to point out that Lekota is no longer a member of Cope’s national committee, nor is he a president,” said Ngwema.

The investigation would also decide whether Lekota should be removed as Cope’s leader in Parliament, he said.

Ngwema said the suspension meant nothing to Shilowa because the meeting had not been officially sanctioned.

“Yesterday’s [Saturday] meeting was a gathering of friends who occasionally like to tickle each other’s fancy by claiming that they have authority or standing in the organisation,” said Ngwema.

“The gathering of people are supporters of Mosiuoa Lekota and that meeting was not an official meeting of the party.”

“So their pronouncements have got nothing to do with Cope. Those people are the very same people who claimed to have suspended Mbhazima last year.”

‘Childish’
Dexter responded on Sunday by saying that Shilowa and his followers were “being childish” by not accepting their suspensions.

“What Mr Shilowa and those around him are doing is childish,” said Dexter.

Dexter claimed the gathering in Kempton Park was a sitting CNC.

“The only people who can sanction a CNC is the CNC itself.”

He warned that if Shilowa and his faction ignored the suspension they would have to face the consequences.

“If he ignores the suspension he will not have an opportunity to give his side of the story [at the party’s disciplinary hearing],” said Dexter.

Dexter could not confirm reports that Cope deputy president Phumzile Mlambo-Ngcuka quit the party on Saturday.

“We have not received a resignation letter from her.”

He said the party had phoned her and other CNC members on Saturday to check if they were still members of the decision making body and that they would attend the Kempton Park meeting.

Mlambo-Ngcuka did not send a “confirmation” whether she was still a member of the CNC.

At the Kempton Park meeting, delegates resolved that the local government elections should be prioritised. The meeting appointed Ndzipho Kalipi as the head of elections and a team to finalise the manifesto and details of the campaign. – Sapa, Mail & Guardian reporter