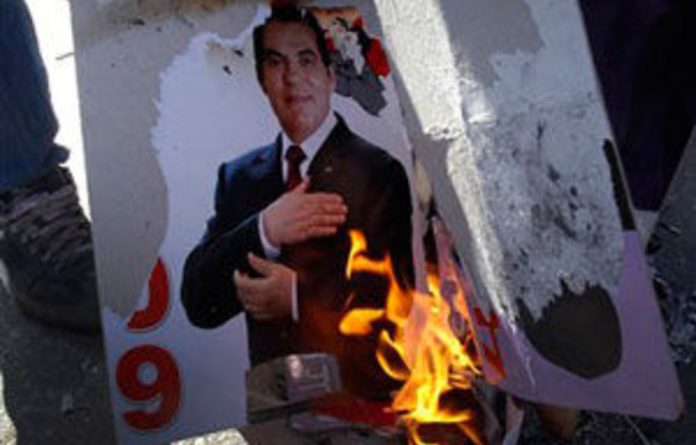 Tunisia’s army chief on Monday warned that a “power vacuum” in the country could lead to dictatorship, as the government prepared a major Cabinet reshuffle after thousands rallied in the capital.

“Our revolution, your revolution, the revolution of the young, risks being lost … There are forces that are calling for a void, a power vacuum. The void brings terror, which brings dictatorship,” General Rachid Ammar told the crowd.

Speaking through a megaphone and surrounded by soldiers, the popular general said the army would act as a “guarantor” for the revolution that ousted president Zine al-Abidine Ben Ali and would also respect the Constitution.

He appealed to protesters to let “this government or another one” work.

Ammar is hugely popular in Tunisia as the opposition says he was sacked by Ben Ali in the final days of the regime for refusing to shoot on protesters and is rumoured to have then played a crucial role in pushing out Ben Ali.

He has since apparently been reinstated by the new interim leadership.

Education Minister Taieb Baccouch, a government spokesperson, said that a Cabinet reshuffle involving at least six ministerial posts was currently under discussion and could be announced later on Monday or on Tuesday.

“In total there will be a minimum of six, if not more, posts vacant and this will definitely necessitate a Cabinet reshuffle, possibly between now and tomorrow,” he said in an interview a week after the government was announced.

Five ministers have already announced their resignation from the government.

Violent scenes
There were some violent scenes at a demonstration in the city centre earlier as security forces fired tear gas and sealed off the area with barbed wire.

“Resign scum!” the protesters chanted in front of the prime minister’s offices after hundreds spent the night staking out the building in defiance of a curfew kept in place in a bid to restore order amid continuing turmoil.

Many of the protesters had made their way to the capital from the impoverished rural parts of Tunisia where the uprising began and held up pictures of victims of Ben Ali’s bloody crackdown in recent weeks.

Most primary schools also remained shut despite a government order to reopen after teachers called an “unlimited” strike in protest against the national unity government installed after the end of Ben Ali’s 23-year rule.

Teenagers in their final year of school returned to classes as expected and some universities are to start reopening on Tuesday. Schools and universities were shut down by Ben Ali in a bid to stop anti-regime protests widening.

The General Union of Tunisian Workers (UGTT), which called the teachers’ strike, has refused to recognise the new government because it keeps in place important figures from the ousted regime, including Prime Minister Mohammed Ghannouchi.

Many Tunisians feel the same and have kept up daily protests, calling also for the destruction of Ben Ali’s RCD party.

Others say it is time for calm.

“We have to make the democratic process real and irreversible and at the same time guard against the violence and anarchy that threaten our country,” Rachid Sfar, a former prime minister, wrote in an editorial in La Presse daily.

Ghannouchi, in place since 1999, says he will resign only after the state’s first democratic elections since independence from France in 1956.

He said the vote could be held within six months but has not set a date.

Criticised
France has been criticised for offering support to Ben Ali and President Nicolas Sarkozy said it had “underestimated” the anger of the Tunisian people.

French state prosecutors also opened an investigation into the Paris real estate assets of the Ben Ali family after activist groups filed a civil suit estimating he had amassed $5-billion.

Ben Ali fled to Saudi Arabia on January 14 amid a wave of protests.

The movement against Ben Ali began after a 26-year-old fruit vendor, Mohammed Bouazizi, set fire to himself to protest police abuses.

There have also been calls for Tunisia-style protests in Sudan and Yemen. — AFP