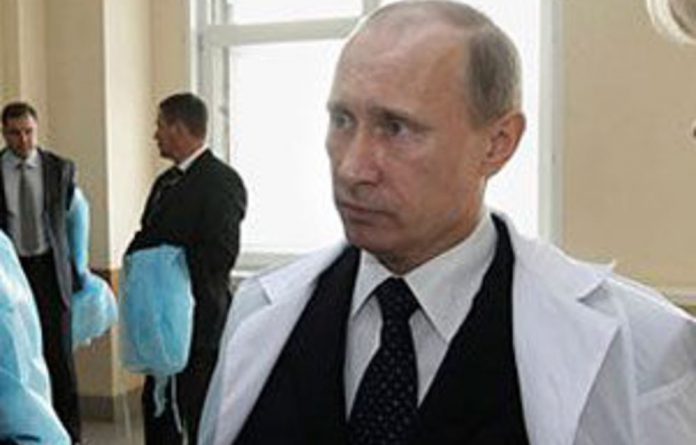 Prime Minister Vladimir Putin vowed revenge on Tuesday for a suicide bombing that killed at least 35 people at Russia’s busiest airport and underscored the Kremlin’s failure to stem a rising tide of attacks.

Talking tough a day after the bombing, Russia’s leaders ordered security services to root out the culprits behind the attack, which bore hallmarks of militants fighting for an Islamist state along Russia’s southern flank.

“This was an abominable crime in both its senselessness and its cruelty,” Putin told a meeting of ministers in Moscow.

“I do not doubt that this crime will be solved and that retribution is inevitable.”

President Dmitry Medvedev criticised law enforcement agencies and airport managers over the attack at Domodedovo, a major international gateway to Russia. At least eight foreigners were killed in the attack.

“Everything must be done to find, expose and bring the bandits who committed this crime to court — and the nests of these bandits, however deep they have dug in, must be liquidated,” he said.

“We must not stand on ceremony with those who resist … they must be destroyed on the spot,” Medvedev told leaders of the Federal Security Service (FSB), which is tasked with coordinating Russia’s fight against terrorism.

The bombing, which ripped through the area where international travellers emerge after collecting their bags, came just days before Medvedev is due to pitch Russia to investors and corporate leaders at the World Economic Forum in Davos, Switzerland.

Medvedev has delayed his departure for Davos, where he is due to deliver the keynote speech opening the forum. Russian Health Minister Tatyana Golikova said 49 people remain in a serious or very serious condition in hospital.

Kremlin’s silent war
There was no immediate claim of responsibility for the bombing, but Russia has been grappling with a growing Islamist insurgency in the mainly Muslim republics that make up its southern flank in the North Caucasus.

Rebels from the region have threatened attacks against cities and economic targets in the run-up to a parliamentary election this December and a 2012 presidential poll in which Putin is expected to return to the Kremlin or back his protege, Medvedev, for a second term.

“Terrorism remains the main threat to the security of our state, the main threat to Russia, to all our citizens,” Medvedev said. He said terrorist attacks increased last year, calling it “the most serious signal” for law enforcement.

“It is clear that there is a systemic failure to provide security for people” at Domodedovo, said Medvedev.

He told the FSB to ensure proper security at upcoming international events including the 2014 Winter Olympics in Sochi, on the edge of the North Caucasus.

Both Putin and Medvedev donned white coats and stood at victims’ bedsides in separate visits shown on state television.

Putin, the dominant partner in Russia’s “tandem” leadership, built his tough reputation by launching a war in late 1999 to crush a rebel government in Chechnya, a North Caucasus province.

That campaign achieved its immediate aim but insurgency has spread to neighbouring Ingushetia and Dagestan and spawned persistent attacks beyond the North Caucasus, despite Kremlin vows to crush insurgents and nurture the region with subsidies.

Government critics warned that tough rhetoric will do little to stop attacks by militants in an insurgency they say is aggravated by heavy-handed law enforcement.

Foreign victims
The choice of the Domodedovo international arrivals area suggested the attackers wanted to make an impact beyond Russia. An investigator cited by news agency Itar-Tass said the bomber appeared to have been a heavily built man aged 30 to 40. Other reports pointed to a female suicide bomber or two attackers.

An Emergencies Ministry list of the dead included eight foreigners: two Britons, a German and citizens of Bulgaria, Kyrgyzstan, Tajikistan, Uzbekistan and Ukraine. The British Foreign Office said one Briton was confirmed dead.

The spread of violence from the North Caucasus, where it is fed by corruption, poverty, clan rivalries and religious radicalism, fans Russian nationalist militancy in the heartland.

Tensions between ethnic Russians and the 20-million Muslims who make up one-seventh of Russia’s population flared dramatically last month. Russian nationalists attacked passers-by of non-Slavic appearance — many of them from the North Caucasus — in central Moscow, just steps from the Kremlin, .

On Tuesday police officers boosted their presence around railway stations and airports, carrying out spot checks of people who looked as though they could be from the Caucasus.

The worst attack carried out by North Caucasus insurgents took place in 2004 when militants seized control of a school in the town of Beslan. When Russian troops stormed the building in an attempt to end a siege, 331 hostages, more than half of them children, were killed. — Reuters