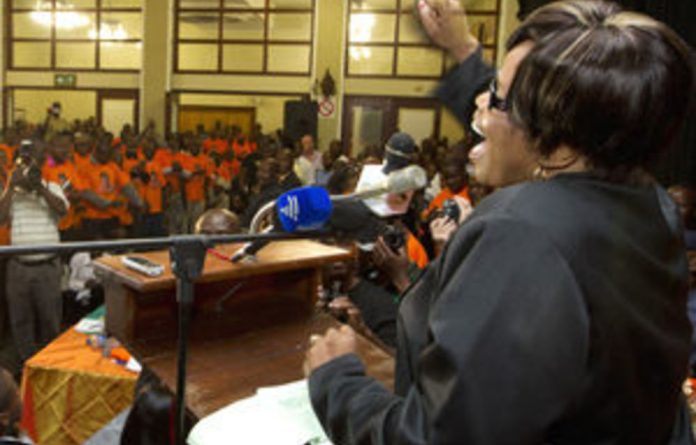 At the announcement of her new political organisation, the National Freedom Party (NFP), in the Durban city hall on Tuesday, and again on Wednesday at the Ulundi Holiday Inn, she broke into the same song.

A deep isiZulu church number drawing from St Paul’s Epistle to the Galatians: “Umvuni uzovuna akutshalile/ Azophela amaqhinga” (“For whatsoever a man soweth, that shall he also reap”).

It was a rebuke to the traditionalist leadership of the IFP, whom her supporters charge have stymied her ambitions to succeed Mangosuthu Buthelezi, the current IFP president.

It also reflected the strong Christian sensibility that underpins the nascent NFP. But perhaps most importantly it was a warning to the IFP leadership — they will rue the loss of Magwaza-Msibi come election time later this year.

During a swift tour of Nongoma and Ulundi in the IFP heartland on Wednesday the last message resonated loudest. The two municipalities, with eDumbe, uPhongolo and Abaqulusi, are in the Zululand district municipality where Magwaza-Msibi, until her ignominious redeployment by the IFP to the provincial legislature’s backbenches last year, served as mayor for eight years. During her tenure the municipality received unqualified audit reports throughout.

‘Mass defections’
On Wednesday Magwaza-Msibi, who is extremely popular in the area, was the beneficiary of mass defections from the IFP there. At Nongoma 25 of the IFP’s 35 sitting councillors announced their intention to move to the NFP, as did all the IFP’s constituency chairpersons.

In Ulundi 18 of the 24 IFP constituency chairpersons and 15 councillors followed suit. Seven of the nine IFP councillors in eDumbe also defected.
Mpiyakhe Hlatswayo, the former eDumbe mayor who was expelled from the IFP for supporting Magwaza-Msibi, said: “We are in control at eDumbe — the IFP can definitely kiss it goodbye in the elections.”

Hlatswayo said that all the constituency structures of the IFP in eDumbe, including the women’s brigade and youth brigade, were pro-Magwaza-Msibi, as were seven of the eight amakhosi in the area.

Mandla Zondi, a constituency chairperson in Ulundi, said that all 16 branches in his ward had moved to the NFP. “We’ve been calling for democracy and our voices, as ordinary members of the IFP, to be heard. They haven’t been, so there’s no option but change,” Zondi said.

Magwaza-Msibi said on Tuesday that she was confident that 80% of the IFP’s structures would follow her to the NFP.

A NFP steering committee insider said that these structures would, in the main, inform how candidate lists were drawn up for the local government elections.

Mobilising
Magwaza-Msibi’s message to constituency leaders and activists in Ulundi was simple: “We need to convert and transform all these structures to the new party, because the people are already converted.” She exhorted supporters to face up to the “mammoth task” and “mobilise as many people as possible to win the local government elections” in these areas.

“I’ve worked hard for you, I will continue to work hard for you. As a collective we have a responsibility and obligation to work as we have never worked before,” she said.

Heavily implied is that the current IFP leadership will reap what they sow. A frequent criticism of the leadership is that, except for Magwaza-Msibi, they have shown neither the will nor the ability to arrest the party’s rapidly declining electoral fortunes. In 2009 the IFP’s support fell by half, to 22,4% in KwaZulu-Natal and 4,5% nationally.

Shrinking support means less chance of government jobs. Hlatswayo believes that this is why the 2009 elections were such a watershed for the IFP.
He also complained that many IFP leaders “were not working very hard.

When we had to deploy people to the provincial and national parliaments many hard-working people were nominated from the ground and appeared high up on nomination lists but didn’t make it. People were replaced unilaterally by others who we have never seen in our communities.”

Conservatives such as national MP Mario Ambrosini and KwaZulu-Natal provincial councillor Roman Liptak were seen as having Buthelezi’s ear but no grassroots support, Hlatswayo said. It was those who had been sidelined who had, in the past two years, driven the push for Magwaza-Msibi.

Two powers
Historically, areas such as Ulundi and Nongoma have been almost impenetrable IFP strongholds. In the 2006 local government elections the IFP averaged about 90% of the vote in all wards in Ulundi, while the ANC averaged 6% of the vote.

As Magwaza-Msibi’s open-topped cavalcade swanned through Nongoma on Wednesday morning, bringing the one-street town to a standstill, a 66-year-old man, wondering what the brouhaha was all about, said: “You don’t see the IFP coming here and conducting door-to-door campaigns, or trying to attract the youth vote here in Nongoma, or do much for them.”

An IFP supporter “since the beginning”, he said he doubted if he would vote for the party again.

It was a view echoed by 33-year-old Wiseman Mfusi of Nongoma: “Magwaza-Msibi is my leader and she has done a lot here as mayor. She gives Christmas presents to the old ladies, has bursaries for young students and got tractors for people. The other IFP leaders do nothing, which is why I am following my leader to the NFP.”

In it to win it
NFP insiders admit that, with time and funding not on the side of the new party, its unofficial local-government election strategy is to focus on and win the Zululand district and its five local municipalities.

The party will concentrate on rural municipalities such as Msinga, uMzinyathi, Amajuba and eMadlangeni, where it hopes to swing existing IFP structures, as a prelude to moving to the Eastern Cape and Limpopo.

At the time of going to press, Magwaza-Msibi was in the Eastern Cape meeting the abaThembu king, Bayelekhaya Dalindyebo, and consulting IFP structures she established there.

Unlike the lurid orange T-shirts that the NFP distributed in Durban on Tuesday, which could be spotted from the Drakensberg, its policies are less clear. Magwaza-Msibi said that policies and the party’s election manifesto would be confirmed by the time the party officially launched on February 12, “after consultation with communities”.

What is evident is that social conservatism and Christian morality, particularly appealing to the rural base, will be strong elements. The NFP’s events this week were marked by much praying and singing of Christian hymns. A Durban mfundisi (priest) this week compared the formation of the NFP to the “birth of Joseph”, with “God himself opening the womb”.

The conservative political messaging is likely to be harnessed to a brash electioneering campaign modelled in no small part on Jacob Zuma’s drive for leadership of the ANC in 2007 and the ANC’s highly successful 2009 general election campaign in the province.

Also central to her campaign are disgruntled former IFP youth leaders who since 2000 have been un-able to put a youthful stamp on the party.
The party they left behind has been largely silent. The Mail & Guardian could not contact Musa Zondi, the IFP secretary general.

Its response to the announcement of the NFP on Tuesday was perhaps the strongest suggestion of the IFP’s otherworldly political headspace.

It released a “leaked” one-page document, purporting to be from the ANC national executive committee, claiming that Magwaza-Msibi was an agent of the majority party.