Just a step to the left 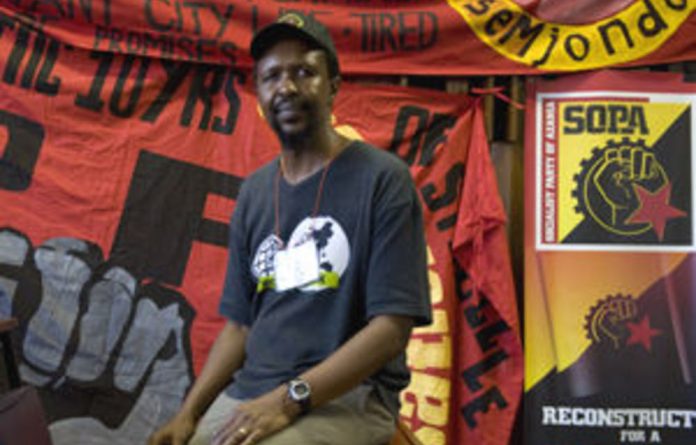 Founding member of the Soweto electricity crisis committee and the Anti-Privatisation Forum (APF) Trevor Ngwane was one of more than 200 delegates who attended the inaugural Conference of the Democratic Left at Wits University last weekend.

Ngwane recently returned to his hometown of Soweto after 18 months of study towards a master’s degree in sociology at the University of KwaZulu-Natal’s Centre for Civil Society. He spoke to the Mail & Guardian.

There were tense moments throughout the conference. What is your view of the conference process?
It was quite a big step forward for the left, in so far as the left represents the interests of the working class and the poor. Unless there’s a clear political approach, struggles will not achieve as much as they could. For example, in a community like Balfour the government sent the president of the country. In fact, he went there twice — five months after the first visit there was another protest. Fortunately, the second time I was there — and I saw how the ANC government operates.

What did you observe?
He came with popular ministers such as Nkosazana Zuma, Blade Nzimande, Geoff Doidge. The people would not let the ministers speak, except for Nkosazana, maybe because she is a Zuma as well. Jacob Zuma had a hard time actually getting an ear from the masses. He was almost begging the crowd to listen and not embarrass him. In fact, in the end, the only way he got away was by putting his integrity on the line. He said: “I, as Zuma, promise you that when I go away, these people will deliver —” The crowd allowed him to go, but he was at their mercy. After he left, Balfour never rose up again, because of a lack of processes. That’s why in South Africa you need a political approach ­- an alternative political party. So the conference was a process of the left trying to find one another. In fact, one of the resolutions was that the main focus will be on facilitating solidarity within different struggles.

Haven’t social movements become weaker?
Social movements started strongly but by 2005 many had been weakened. Some even disappeared. There’s a limit to how much you can take one issue forward. The TAC [Treatment Action Campaign], for example, fought a good battle for ARVs [antiretrovirals]. Once the government was forced to do the roll-out, they became its handmaidens. The other thing was repression. I must have gone to jail three or four times — There was infiltration and agents provocateurs — we caught at least one who confessed in the APF. In the Soweto electricity crisis committee they tried to infiltrate our administrator, youth leader and branch leader in Sinawane. The National Intelligence Agency was using threats and money. But we shouldn’t emphasise repression too much because during apartheid there was serious repression and the struggle never died. It’s a loaded concept … Balfour and Khutsong were mass uprisings to me, about class issues.

Given the challenges facing people, can these uprisings become more politically focused?
In my research I studied the history of the United Democratic Front (UDF). There were all these civic groups and the UDF tried to pull them together, but unfortunately it was dominated by [Freedom] Charterists. Despite that sectarianism, the struggle became stronger. People in Balfour, for example, have no organised way of reaching out to people in Khutsong, Intabazwe, Gugulethu or Diepsloot. There is no organisation that unites social movements, protest actions and the trade-union struggle. Because of its suffering, the left is getting wiser but, to be frank, it’s scared of the ANC.

Do they fear the iron fist?
Well, the iron fist is inevitable, given the ANC’s trajectory. In fact, they would have used an iron fist if they could get away with it. The public-sector strike exposed the lie of Zuma — if you saw the handwritten posters, the workers were insulting him. So their eyes are opening. But nothing happens without a political project. Look at Tunisia. There’s a revolution there, but no leadership. In South Africa we must have a left that’s ready to give direction to the masses.

How representative of the South African left was this conference?
My group, the Socialist Group, put a minority position that we need Cosatu to be part of this. We also need other unions like Nactu and Fedusa, but it was a good start. Some believe that the conveners were a clique of intellectuals who could never get grassroots support. The best thing we can do is to bring in the masses, so that they can be that base and elect new people who are not as intellectual. We felt that there were not enough grassroots organisations — which could lead to a dominance by the ­intellectual types.