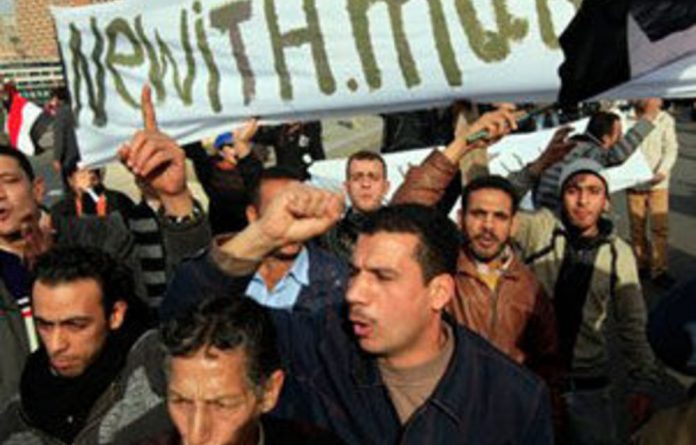 Crowds gathered in central Cairo on Tuesday for a protest they hoped would swell to a million people demanding an end to the 30-year-rule of President Hosni Mubarak.

But protesters in Cairo’s Tahrir Square, who kept vigil through the night in defiance of a curfew, vowed to continue their campaign until the 82-year-old Mubarak quit.

“The only thing we will accept from him is that he gets on a plane and leaves,” said 45-year-old lawyer Ahmed Helmi.

By about 6am GMT, three hours before the lifting of the curfew, their numbers had swelled to about 3 000 and more people were converging on the square, witnesses said.

Already political analysts were talking not about whether Mubarak would step down, but when and how.

“The succession is already under way,” said Steven Cook at the Council on Foreign Relations on the CFR website.

“The important thing now is to manage Mubarak’s exit, which must be as graceful as possible at this point. For honour’s sake, the brass won’t have it any other way.”

The military, which has run Egypt since it toppled the monarchy in 1952, will be the key player in deciding who replaces him and some expect it to retain significant power while introducing enough reforms to defuse the protests.

“At this point Suleiman represents the army, not Mubarak,” said Fawaz Gerges at the London School of Economics.

Liability
“Mubarak has become a liability for the institution of the army,” said. “And so it is becoming more difficult by the day for Mubarak to remain in office.”

The United States and other Western powers have demanded Mubarak hold free elections. Even if he holds out against calls for his resignation, it seems unlikely he could win a vote.

Washington also said Mubarak must revoke the emergency law under which he has ruled since 1981. It has sent a special envoy, former ambassador to Cairo Frank Wisner, to meet Egyptian leaders. “The way Egypt looks and operates must change,” said Robert Gibbs, spokesman for President Barack Obama.

Protesters, inspired in part by a revolt in Tunisia which toppled its president Zine al-Abidine Ben Ali on Jan. 14, have demanded an end to political oppression.

But years of repression have left few obvious civilian leaders able to fill any gap left by Mubarak.

Mohamed ElBaradei, former head of the International Atomic Energy Agency (IAEA), has offered to act as a transitional leader to prepare Egypt for democratic elections. Many Egyptians, however, have said they had reservations about a man who has spent much of his recent career outside the country.

The Brotherhood, which says it supports a pluralist democracy, began with a cautious approach to joining the protests led by the young and urban professional classes. The group has borne the brunt of Mubarak’s repressive rule.

But it is now raising its profile, seeking to tie up with ElBaradei. It said on Monday it was calling for protests until the whole establishment departed — “including the president, his party, his ministers and his Parliament”.

Israeli Prime Minister Benjamin Netanyahu, used to calm on his southern border since a 1979 peace treaty with Cairo, said Egypt could turn into the kind of militant theocracy installed in Iran that same year.

Suleiman appeared on state television on Monday to say Mubarak had asked him to begin talks with all political forces on reforms. Some saw his appearance — rather than that of the president — as a sign Mubarak was already on his way out.

A presidential election due in September might give Mubarak the opportunity simply to say he will not run again. But such a tactic may underestimate the desire on the street to see him go.

“This all aims to gain time, calm the mood on the street, drive the protesters away and diminish the revolution … The president must end his rule and leave, there is no alternative,” Cairo University politics professor Hassan Nafaa said.

At least 140 people have died since demonstrations began last Tuesday.

In Egypt’s second city, Alexandria, thousands of people gathered near the main railway station, many with food and blankets, saying they would join Tuesday’s “march of a million”.

Officials said rail services would be disrupted on Tuesday by curfew orders, which may keep some people away from protests.

With internet access cut off, Google said it was launching a special service to allow people to send Twitter messages by dialing a phone number and leaving a voicemail.

Foreign governments, meanwhile, scrambled to ensure the safety of their nationals trapped by the unrest in Egypt. Companies also pulled out staff as confrontation brought economic life to a halt.

The unrest has spooked markets on fears it could spread across the Middle East, including to oil producing states like Saudi Arabia. Europe’s benchmark Brent crude oil rose above $100 a barrel for the first time since 2008 on Monday. – Reuters