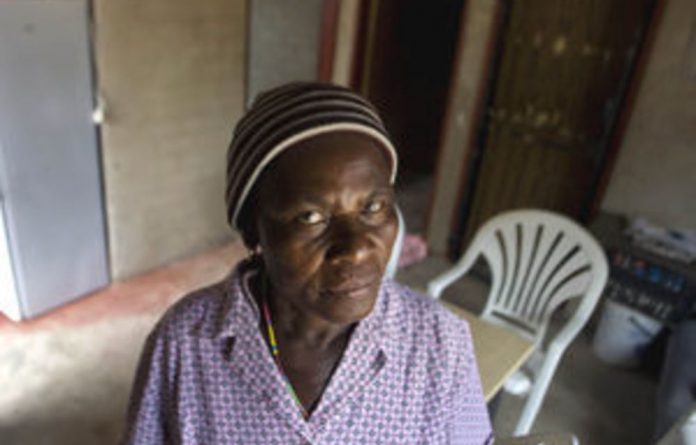 In Johannesburg’s Diepsloot the backyards of RDP houses are a maze of shacks that far outnumber the formal structures in whose shadow they stand.

They are living proof of the rampant unemployment that stalks the country — during the day adults sit around drinking or doing household chores. Supersize spazas manned by Pakistanis are the order of the day.

Rents in these largely concealed backyards are usually a few hundred rands a month but they strain relations between landlords and tenants come month-end.

However, recently, seemingly exorbitant and irregular water bills issued by the City of Johannesburg have complicated an already volatile relationship between these two parties.

Tsholofelo Moloi, one of the first people we met on a visit in Diepsloot’s Extension 7, said she was moving to a shack next door after her landlady had suggested ‘they reach a compromise” over her recent R6 000 water bill.

‘If the same thing happens again next door, I’ll move again,” she said. ‘There’s no way that I can pay rent and water bills at the same time.”

Pending bill
In Extension 2 Mukondeleli Magwaba, a pensioner who shares her yard with her daughter, granddaughter and about 20 others, is pondering how far her pension will go now that she has to pay monthly instalments of R110 to cover her R2 800 water bill.

When she called the city’s helpline last year, she told the operator that she had never received a bill in the four years of owning her stand. ‘As a pensioner, I was told that I would be exempt from paying a water bill,” she said. ‘I don’t know what happened to that agreement.”

On the other hand, Ntombifuthi Nene, an unemployed mother of three, remembers being warned two years ago that she would have to curtail her water use because she would soon have to start paying for it.

With the seven shacks in her backyard built around a communal tap, she complained that some tenants used too much water. ‘No one comes to read the meter here,” she said, hunched over a basin full of soaking clothes. ‘It’s all guesswork. I’ve never paid but the people with fewer tenants do seem to pay.”

The people we spoke to in various parts of Diepsloot have received bills ranging between R2 500 and R15 000 but their stories are similar. Charles Marema, whose house nestles in a corner of a snaking dirt road in Extension 10, complained of constant harassment by alleged council agents in January.

Their terse and guarded manner made him suspect that he was being scammed. ‘They gave us different account numbers each time they called,” said Marema, ‘and they threatened to blacklist me.” His bill was R3 000.

Brighton Ndlovu said he had not received a bill since 1998 and then got two in quick succession — one in October for R11 000 and another two days later for R14 000. He claimed he was never offered terms to settle his debt.

Generally, Diepslooters have no idea who to turn to to air their grievances. Commenting on the apparently abnormal billing estimates, City of Johannesburg spokesperson Kgamanyane Maphologela said that meters were sometimes inaccessible and that readings had been interrupted by ‘internal organisational restructuring”.

He said billing should normalise within three months, when estimating errors would be automatically adjusted. The city has a social package, Siyasizana, under which poor people can apply for subsidised rates, Maphogela said.