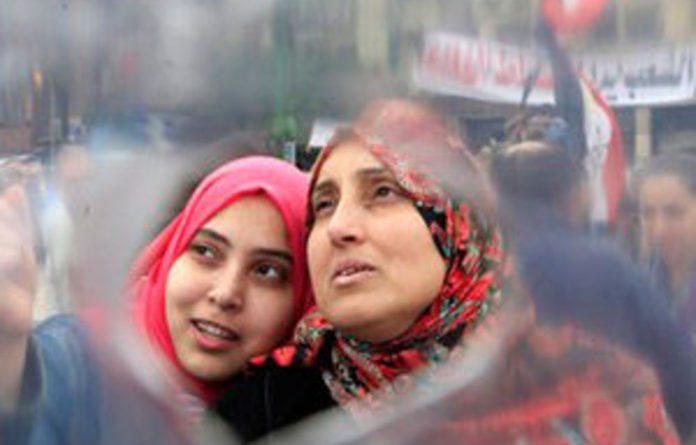 Google executive Wael Ghonim, who was released in Cairo on Monday, said he was kept blindfolded for two weeks while being detained by Egyptian state security.

Google said last week that Ghonim, the firm’s head of marketing for the Middle East and North Africa, had not been seen since January 27, two days after anti-government protests erupted in Egypt.

Ghonim said after his release that he was picked up by three plainclothes men in a street in Cairo, bundled into a car and taken off for interrogation by state security men.

He said he was blindfolded throughout his detention.

“I am not a symbol or a hero or anything like that, but what happened to me is a crime,” he told Dream TV.

“If you want to arrest me, that’s your right. But there are laws and I am not a terrorist or a drug-dealer. We have to tear down this system based on not being able to speak out.”

Activists said Ghonim had been involved in founding “We are all Khaled Said”, an anti-torture Facebook group named after an activist who rights groups said was beaten to death by police in the port city of Alexandria. Two officers now face trial.

That Facebook group has been credited with sparking a public outcry over police torture and helping inspire the protests demanding an end to President Hosni Mubarak’s 30 year rule.

Ghonim said he was not allowed any news on the protests nor was his family informed of his detention.

He said new Interior Minister Mahmoud Wagdy told him that the anti-government protests had taken the ruling party by surprise.

“The [interior] minister said ‘I’ve only been minister for seven days. You have achieved gains, and no one expected that. How did you do all that? All of us, those inside the party, inside the political system, were amazed, taken by surprise.'”

Ghonim said Wagdy added: “We couldn’t understand what was happening. Now the situation is over. We won’t go back again.”

Google had launched a service to help Egyptians use Twitter despite government internet restrictions by dialling a telephone number and leaving a voice mail that would then be sent on the online service.

Protesters call for push to eject Mubarak
Protesters meanwhile called for a push on Tuesday to eject President Hosni Mubarak from power after the government conceded little ground in talks with the opposition and sought to squeeze demonstrators out of central Cairo.

The protesters barricaded in a tent camp in Tahrir Square have vowed to stay until Mubarak quits and hope to take their two-week campaign to the streets with more mass demonstrations on Tuesday and Friday.

Tuesday’s demonstrations will test the protesters’ ability to maintain pressure on the government after Mubarak (82) refused calls to end his 30-year rule now. He has said he will stay until an election in September but will not run in it.

Hundreds of thousands of people took part in previous demonstrations and the United Nations says 300 people may have died so far.

Egyptian opposition figures have reported little progress in talks with the government.

The Muslim Brotherhood, by far the best organised opposition group, said on Monday it could quit the process if protesters’ demands were not met, including the immediate exit of Mubarak.

The United States, adopting a cautious approach to the crisis, has urged all sides to allow time for an “orderly transition” to a new political order in Egypt, for decades a strategic ally.

But protesters worry that when Mubarak does leave, he will be replaced not with the democracy they seek but with another authoritarian ruler.

Significant disagreements
The opposition has been calling for the Constitution to be rewritten to allow free and fair presidential elections, a limit on presidential terms, the dissolution of parliament, the release of political detainees and lifting of emergency law.

The state news agency Mena reported on Monday that Mubarak had set up two committees to be involved in drawing up changes to the constitution, one of the demands of the protesters.

Mubarak on Monday chaired the first meeting of his new cabinet, which promised to keep subsidies in full and draw in foreign investment.

The potential rise to power of the banned Muslim Brotherhood troubles Egypt’s Western allies and neighbour Israel, which has a peace treaty with it.

Obama said on Sunday the Brotherhood lacks majority support. The White House expressed concern on Monday about the group’s “anti-American rhetoric”, but stopped short of saying it would be against the group taking a role in a future government.

Keen to get traffic moving around Tahrir Square, the army has tried to squeeze the area the protesters have occupied.

Some protesters slept in the tracks of the army’s armoured vehicles to prevent them being used to force the protest into a smaller space.

The powerful army’s role in the next weeks is considered critical to the country’s future. – Reuters