A streak of madness and a lick of paint 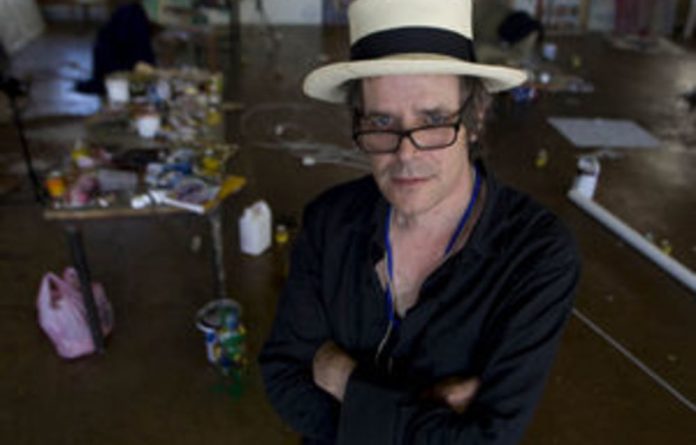 It seems oddly appropriate in the context of Wayne Barker’s art to begin introducing his exhibition Super Boring with a religious reference, albeit a reference taken from the writing of a religiously revered artist (not God), namely the surrealist Luis Buñuel.

In his autobiography, My Last Breath, first published in 1982, he quotes a passage from Solomon’s Book of Wisdom. It’s a piece of writing that does the rounds in pretty much the same way as other now-kitschy reflections — like Desiderata — on the nature of human experience and how we should live our lives.

This piece of writing is put in the mouths of an “ungodly” people, some say the Epicureans, and it talks about the fact that “our work in time shall be forgotten and no man shall have remembrance of our works”.

And it rounds off with the words, “Let us crown ourselves with roses, before they are withered; let no meadow escape our riot.” How I know this description of Epicureanism (and I’ve had an argument with someone about whether Epicureanism really does mean hedonism or a balanced enjoyment of simple pleasures) is through the deceased director and Market Theatre founder, Barney Simon, who would show this passage around, from his rather tatty copy of Buñuel, to the young people who congregated around him. He felt it aptly described the hedonism of our Eighties generation.

Barker was one of those — he met Barney though his partner of the time, the actress Megan Kruskal. In Charl Blignaut and Brenda Atkinson’s 2 000 monograph, published by the Chalkham Press, we are told also that Barker made some contribution to the “oppositional” theatre of the Eighties: he did some collaborative work with Chris Pretorius (of Cape Town’s Glass Theatre) at Berea’s Black Sun and made some sets for the movie Shot Down that I worked on. In that same year (1986) he had his first showing on the “experimental wall” of the Market Theatre.

He had already earned his reputation as one who had resisted military conscription in his own unique way, earning a dismissal by “acting mad”. The revolutionary fervour of the Eighties is something that, thankfully, we won’t have to live through again. Certainly there was a set of white kids producing what Karl Marx would disparagingly call the “beautiful revolution — the revolution of universal sympathy”. This was in contrast to the real and “ugly revolution” going on around us.

‘Forced to rebel’
In his essay titled “The Artist as Naked Subject” for the catalogue to Barker’s current retrospective, critic Simon Njami says that “those who have chosen the intangible path of creation could not mirror the society against which they were forced to rebel”.

In my opinion, I think Njami needs to be contradicted, or at least adjusted slightly, because one cannot say that Barker’s work does not mirror the society against which he has chosen to rebel.

I must confess that I cannot look at a Pierneef without seeing a Wayne Barker. He has, over the years, made something “super” out of Pierneef’s “boring”. As we are told elsewhere in the catalogue, published by Smac Gallery, he has inscribed something mysterious and rich about our collective experience on to Pierneef’s empty landscapes.

In his more recent work he has inscribed something of himself on to the bodies of his subjects — South African superheroes like Nelson Mandela, Jackson Hlongwane and Miriam Makeba.

With these he has constructed his own mythology. Many people who know his work know also that he courts controversy by making up impromptu performances in public spaces. In one he reacted to an art show in Nantes that exoticised Africa by painting himself with chocolate mousse and getting his girlfriend of the time to lick it off him.

The current show’s title, Super Boring, refers to a moment during the Venice Biennale when Barker accused someone of jumping a food queue at the chic Bauer Hotel. The person he accused in turn accused him of being “super boring”, which of course he is not.

Njami says: “Forged at the heart of the Judeo-Christian religion, scandal is a chaste and hypocritical veil which we cast over anything we do not want to see or hear. Christ himself made no bones about it, telling his disciples not to flee scandal but even sometimes to seek it out.” Njami does not give us a reference for Christ’s words but he does do Barker the great favour of giving him this supposedly Christ-like quality.

This is an edited version of a speech made by Matthew Krouse at the launch of Super Boring, which runs at the Standard Bank Gallery, Harrison Street, Johannesburg, until April 6. Tel: 011 631 1889. www.standardbankarts.co.za