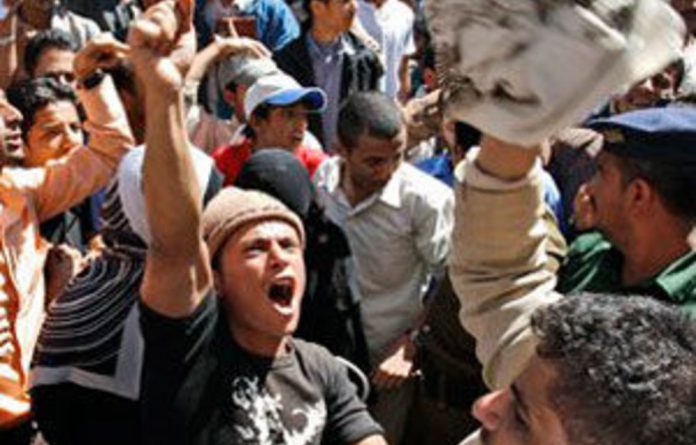 At least three people were injured as the rivals pelted each other with stones, said an Agence France-Presse correspondent, in a second consecutive day of violence in central Sana’a.

Inspired by uprisings in Tunisia and Egypt, protesters estimated to number 3 000 poured out of Sana’a University for the fourth straight day to demand the ouster of President Ali Abdullah Saleh, who has been in power for 32 years.

“The people want to oust the regime” they chanted, picking up the slogan used by demonstrators in Egypt who forced president Hosni Mubarak to step down on the 18th day of mass protests.

As they advanced on Saleh’s palace, supporters of his General People’s Congress (GPC) party using batons and stones confronted the demonstrators, who responded by hurling stones, the correspondent said.

The president’s supporters tried to attack opposition MP Ahmed Saif Hashed, who took part in the protest, but he was protected by fellow marchers, witnesses said.

Demonstrators said police sided with the pro-Saleh militants in dispersing the crowd.

Allegations of police violence
International human rights watchdogs have criticised what they say is Yemeni police violence, in particular the alleged use of electric tasers against protesters.

But cyber-activist Hashem al-Abara, involved in organising the protests in the Arab world’s poorest country through Facebook, vowed the demonstrators would not be intimidated.

“We will continue with the protests and the ruling party’s attacks against our peaceful demonstrations will not set us back,” Abara said. “If Egypt stayed 18 days, it will not matter to us if we stay one, two or three months.”

As tensions soared outside his palace, Saleh announced that his office was open “to listen to the views” of “various segments of society from all the republic’s provinces”.

“These direct meetings between the president and people from various social segments will provide the chance to discuss all the developments and … listen to different views … to serve the country,” the state news agency Saba said.

In Taez, south of Sana’a where anti-Saleh demonstrators staged protests on Tuesday for the fourth day straight, similar clashes erupted with regime loyalists, without any casualties reported. — AFP