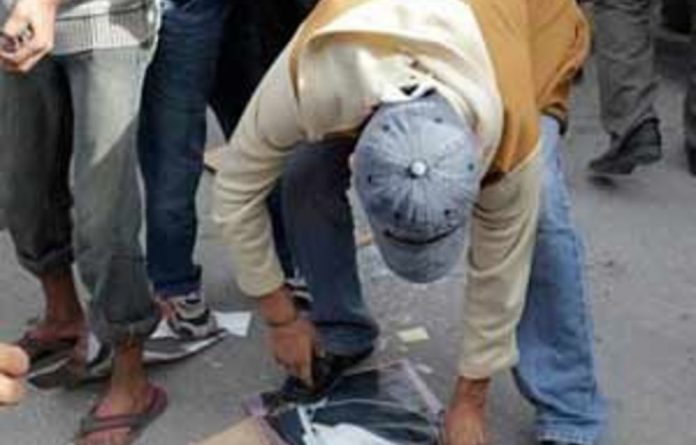 Police in the Gulf island kingdom of Bahrain attacked demonstrators camped out in the capital on Thursday, killing three, in a move to stifle pro-democracy protests inspired by similar movements across the Middle East.

“They are killing us!” one man told Reuters as police firing buckshot and teargas moved on Pearl Square in Manama overnight, putting to flight some 2 000 people, including women and children, who had spent three days there hoping to emulate the successful protest camp on Cairo’s Tahrir Square.

Having seen protests in Tunisia and Egypt gradually build momentum and topple veteran rulers there, Bahrain’s Saudi-allied royal family, long aware of simmering discontent, appear to have decided to nip in the bud the latest challenge to their rule.

After bloodshed in Bahrain, hundreds of Yemenis clashed again on the other side of the Arabian peninsula, and in North Africa there were reports of new unrest in Libya on Wednesday.

A Libyan “Day of Rage” promoted on social media websites for Thursday started with little sign of activity. Supporters of Muammar Gaddafi, in power for 42 years, did stage a rally.

“Profound social and economic issues throughout the Middle East and North Africa will continue to serve as a driving force for further unrest,” said political risk analyst Anthony Skinner at the Maplecroft consultancy. “Protests in Bahrain and Libya reflect the ease with which protests have spread in the region.”

Discontent over youth unemployment was exacerbated in many countries by the knowledge that oil revenues were “being embezzled by ruling political and business elites”, he added.

Suicide trigger
It was two months to the day on Thursday since a young Tunisian, Mohamed Bouazizi, triggered the wave of protests by setting himself alight on December 17 outside a government office in the rundown city of Sidi Bouzid. He was venting frustration at grinding poverty, official corruption and police brutality.

Since Tunisia’s ageing strongman Zine al-Abidine Ben Ali fled a month later, followed a week ago by Hosni Mubarak in Egypt, opposition groups in a dozen or more countries have lived in hope the Arab world might experience a “domino effect” of the kind that swept communists from power in eastern Europe in 1989.

Oil and gas riches, as well as formidable police forces, give rulers the means to fend off challenges. But the way in which Ben Ali and Mubarak were overthrown after their armies refused to crush popular uprisings has given many pause.

Leaders from the Gulf to the Atlantic have announced a variety of measures to ease rising food prices and unemployment and to enhance political participation.

The oil-rich United Arab Emirates said on Thursday it would treble the number of people the rulers would choose to vote for members of an advisory body that serves as a form of parliament.

In Libya, human rights activists said 14 dissidents had been detained and there were unconfirmed reports that two people were killed on Wednesday in clashes in Bayda. The previous day, there had been fighting in Benghazi.

The army in Bahrain, a country of 1,3-million people, issued a warning to people to stay away from the centre of the capital and said it would do whatever was needed to maintain security.

At Pearl Square, abandoned tents, blankets and rubbish were scattered about and the smell of teargas wafted through the air.

Helicopters clattered over the city, which is a regional hub for banks and home to the United States Fifth Fleet.

Sectarian dimension
The sectarian aspect of violence in Bahrain, whose majority Shi’ite population is ruled by a Sunni Muslim royal house, could fuel discontent among the Shi’ite minority in neighbouring Saudi Arabia, the world’s biggest oil exporter.

“This is real terrorism,” said Abdul Jalil Khalil of Bahrain’s Shi’ite party Wefaq, which said it would withdraw from a parliament which has very limited powers. “Whoever took the decision to attack the protest was aiming to kill.”

US President Barack Obama said this week: “The world is changing … If you are governing these countries, you’ve got to get ahead of the change, you can’t be behind the curve.”

But Western powers have been caught in a dilemma between backing rulers whom they see as bulwarks against anti-Western Islamists and at the same time being seen to promote democracy.

In Bahrain, Saudi and Western officials fear majority rule could help their adversaries in Shi’ite-ruled Iran.

In Yemen, where dozens were wounded in the capital Sanaa during rock-throwing clashes between protesters and government loyalists, demonstrators want rid of President Ali Abdullah Saleh, who has ruled for 32 years but is seen by Washington as a key ally in its fight against al Qaeda Islamists based in Yemen.

Authoritarian governments have reason to fear. Young people can watch uprisings on satellite television or the web and can talk on social networks hard for secret police to control.

In Iran, supporters and opponents of the hard line Islamic system clashed in Tehran on Wednesday during a funeral procession for a student shot in a rally two days earlier, state broadcaster IRIB reported. Monday’s rally, in support of the people of Egypt and Tunisia, was biggest unrest since 2009.

In Iraq, three people were killed and dozens wounded in the southern city of Kut on Wednesday as protesters demanding better services fought with police and set buildings ablaze. — Reuters