Corruption is the biggest killer 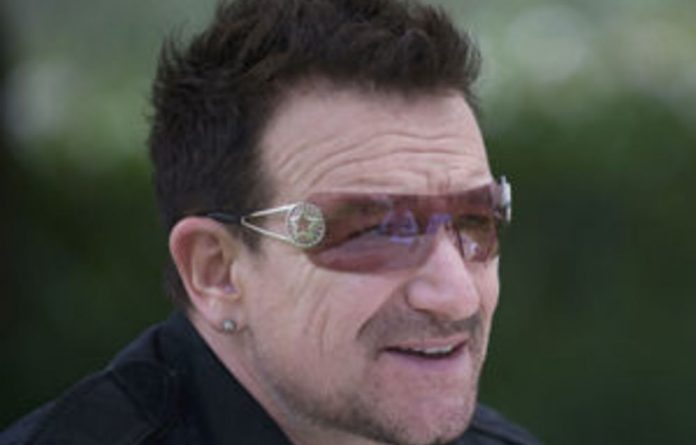 On Thursday morning U2 lead singer Bono met President Jacob Zuma to talk — not about struggle songs, but about rules to improve transparency in the resource sector.

Listen to the indepth conversation between U2 frontman and activist Bono and M&G Editor Nic Dawes on a range of issues.

With him were senior officials at ONE, the advocacy group he backs, including chief executive Jamie Drummond and newly installed Africa director Sipho Moyo.

They hope Zuma will lead an African initiative to create both voluntary and regulatory mechanisms that will compel the mining firms and energy companies that are scouring the continent for resources to publish details of what they pay to governments.

In an extensive interview with the Mail & Guardian ahead of the meeting with Zuma the trio set out how they believe access to information, and the technology to spread it, empowers citizens to fight corruption.

Transparency, Bono argues, is at the heart of the development agenda. “This is more important in fighting poverty than anything else we do — it is a huge multiplier. We see corruption as a bigger killer than HIV/Aids, malaria [and] TB put together. Transparency is the vaccine and — the syringe [is] technology.”

The uprising in Egypt, enabled in part by cellphones and social media networks, is part of a wave of open-architecture democratic movements, he suggests, that are making it increasingly impossible to retain social and political control through secrecy.

The meeting with Zuma, which was preceded by a conversation with Finance Minister Pravin Gordhan at the World Economic Forum in Davos, follows ONE’s success in helping to push for the Cardin-Lugar Amendment to the United States financial reform package, which compels New York-listed companies to publish what they pay in royalties, taxes and licence fees. More recently Bono campaigned successfully for a commitment from French President Nicolas Sarkozy to similar measures.

Voluntary mechanisms like the Extractive Industries Transparency Initiative (EITI) are a good start within individual countries, says Drummond, but aren’t enough. “The key thing about the JSE is that many of the companies that operate there operate across the continent — it’s key that their activities in the DRC [Democratic Republic of Congo], in Zambia and elsewhere are covered by this legislation.”

Western stock markets
Of course success on Western stock markets will be of only partial benefit if the big new player in African resource extraction, China, is left out. Bono and ONE clearly believe South Africa is crucial in winning over the Chinese leadership.

“I think they’ll take the lead from President Zuma — I think they will watch him, I think they would rather an African-led EITI than perhaps the West-led,” Bono says. “I think African leadership is going to be transformed, and I think there’s a big global win for President Zuma; precisely because South Africa straddles two worlds it can lead. He would be the only voice the Chinese would really listen to.”

Bono argues strongly that China, often accused of secretive and unaccountable dealings on the continent, can be brought into the net.

“The Chinese are huge players in the continent now and we shouldn’t imagine that they don’t want to do the right thing. Domestically they are very tough on corruption and so I think this is something that they might well embrace, specifically in the extractives sector. A lot of their competitive advantage doesn’t come from the brown envelope, it comes from quite transparent state subsidies and loan guarantees, building highways.”

Neither Bono nor ONE, however, are blind to the fact that South African leadership on transparency may be threatened by the Protection of Information Bill currently making its way through Parliament.

In Egypt, Bono says, the “mood is not just that we demand to be heard, but we demand to hear. The anger at obfuscation, at controlling information [will now] affect regular democracies.”

Of the Bill he says: “It is extremely alarming and runs completely against the tide of what is happening in North Africa, in the streets of Cairo.” Moyo adds: “We are alarmed, but part of me feels that this Bill will become obsolete before it becomes an Act because of what’s happening, because of the wave [of openness and technology].”

Openness and justice
Bono also argues forcefully that the arc of history will bend away from measures like the Bill and move towards openness and justice. “I don’t believe South Africa would want to be on the wrong side of history. The direction of history is the direction of openness, open architecture, open society — it is impossible to put the toothpaste back into the tube, so don’t try, just be really open.”

How then ought we to understand an Africa that seems pinioned between the events in Tunisia and Egypt and the apparent atrophying of democracy in countries like Ethiopia, Uganda and Rwanda, not to mention the crisis in Côte d’Ivoire?

“There’s always the excuse with conflict that you can’t be as open. But I think that these people do not want to be on the wrong side of history and I think we might see that recorrect itself.”

What they ended up with as a model of leadership, he says, was former Singaporean president Lee Kuan Yew who held on to intensely centralised power in that prosperous pseudo-democracy for decades. “The world,” Bono says, “is a little star-struck with the East.” And that, he argues, is not a model that can work in our time.

“The people who invented the 21st century, mostly living in Northern California, [grew] up listening to loud rock ‘n roll, [were] activists, [were] anarchic in their thinking.”

Innovation
Apple computer, he points out, is famous for its “Think Different” commercial; Microsoft co-founder Paul Allen listened to Jimi Hendrix. “The reason they think differently is not an accident. The reason [the 21st century] didn’t come out of London, Paris or Berlin is that hierarchical societies don’t produce the mind-set that the 21st century demands.

“In Ireland we’re very good at technology. Africans are just naturally bound for the 21st century. The very [chaos] that people [complain of] is a feature. And that’s why China has to watch out because it is innovation that will always win the day. Innovation comes out of an open environment. You can put the broadband in the ground but you have to have noisy, messy people if you want to write software. So the [Asian] model might have worked for the 20th century, but I am not sure it is going to work at the start of the 21st.”

All this is a tough, complex sell. And Drummond takes the analysis one step further. “The necessity of regional integration is a challenge to ‘let’s make our state the be all and the end all in each case’— the infrastructure required to create scale is going to challenge each individual unit to be part of a larger whole.

“That is the challenge for the G20 [meeting in Paris] this weekend. All the different regional plans will coalesce in the next year and we should get behind them because regional integration is part of the democratisation agenda.”

Bono insists that ONE is treading carefully as it builds alliances with African organisations and figures out how best to link its lobbying successes in the West with concrete results in Africa. “We’re in listening mode,” he says.

But his enthusiasm is uncontainable: “Just think of the potential to unlock— this is it. It’s all happening at the start of the 21st century. It is as if, in a movie, they said: around about 2011 things will have to change and it will be change unrecognisable. There seem to be years when everything changes and this is one of them.”