The monarchy in the money 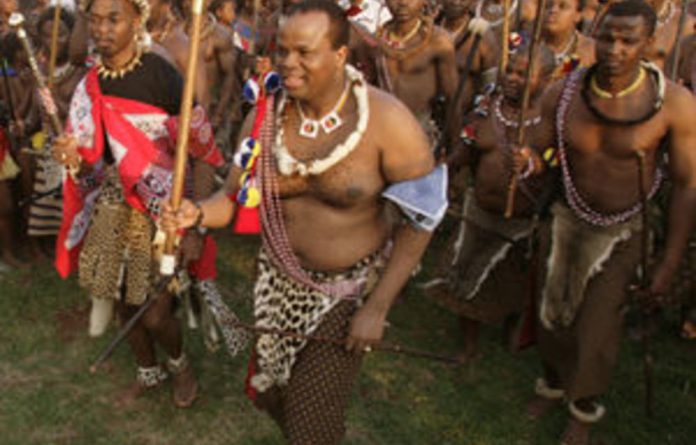 The British-educated 42-year-old is reported to have an annual personal budget of R600-million a year, much of which funds fleets of fast cars, luxurious palaces and regular overseas shopping trips for himself and his 13 wives.

In the 2009 Forbes list of the World’s Richest Royals, King Mswati’s wealth was estimated at $100-million, which does not include an alleged further $10-billion that was put in trust in King Mswati’s name for the people of Swaziland by his father, King Sobhuza II.

Often photographed bare-chested in traditional dress with feathers in his hair, King Mswati enjoys hosting cultural events such as the annual Reed or Umhlanga Dance which has been strongly criticised for its portrayal of women. In the Reed Dance thousands of bare-breasted virgin girls parade before the king, hoping to be chosen as his next bride.

Rights campaigners, who say the king’s polygamy sends out the wrong message in a country where one in four adults are believed to be infected with HIV, told the Mail & Guardian of non-menstruating girls allegedly being taken out of school classrooms and made to strip naked and clean parts of the king’s royal kraal or household.

In 2008 the king was widely condemned when he splashed out more than $3-million on a 40-40 celebration to mark his birthday and 40 years of independence in Swaziland.

As well as the incredible spending, there is also a soap-opera feel to the behaviour within the royal court and among the country’s elite. Last year Mswati fired the justice minister, Ndumiso Mamba, after he was found in bed with the king’s 12th wife and former Miss Teen Swaziland, 22-year-old Nothando Dube.

Local media were banned from reporting the incident, but copies of South African newspapers were widely circulated, leading to a bizarre clampdown when one man was arrested for photocopying an article about the love affair, on the grounds of breaching copyright.

The latest scandal to rock the country involves Foreign Minister Lutfo Dlamini and Swaziland’s ambassador to Kuwait, Phesheya Dlamini. According to a few cryptic reports in local media and widely circulating rumours, the pair allegedly misappropriated a large sum of cash, which is said to have been given to the king by a member of the Kuwaiti royal family.

Conflicting reports say the minister has since been sacked from the Cabinet, whereas others say he is on sick leave. When contacted by the M&G, Lutfo Dlamini refused to comment.

On April 19 the king will celebrate 25 years in power and there apparently are plans for a lavish silver jubilee celebration. It is likely no expense will be spared, regardless of Swaziland’s current economic plight.