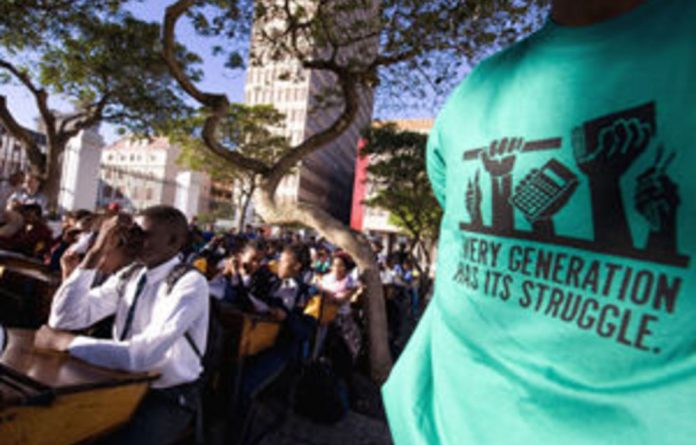 More than 100 high school learners picketed outside Parliament on Thursday last week to draw attention to education crisis in the Eastern Cape.

More than 100 high school learners set up a mock classroom outside Parliament on Thursday last week to draw attention to the education crisis in the Eastern Cape.

‘We decided to set up a mock classroom outside Parliament as it symbolises the sort of conditions that many learners are being educated under in the Eastern Cape,” said Dmitri Holtzman, parliamentary liaison officer for the NGO Equal Education, which coordinated the protest action in CapeTown.

‘Learners in the province are forced to attend schools that do not have proper facilities so we wanted to raise public awareness about their plight,” Holtzman told M&G Education Online.

Last week President Jacob Zuma warned that the Eastern Cape education department could face central government intervention if it did not get its house in order. The department recently cancelled its school feeding scheme and learner transport system and failed to renew the contracts of 4 000 temporary teachers.

School infrastructure remains a challenge in the province and seven mud schools recently launched legal action in an attempt to be provided with adequate facilities.

The protestoers outside Parliament handed over a memorandum to representatives from the presidency, the national department of basic education and Parliament’s portfolio committee on education calling for immediate intervention.

Holtzman said that it is clear that the province is currently unable to effectively run its education department because of ‘poor financial management and leadership”.

“The minister [of basic education, Angie Motshekga] has two options. Either she invokes section 100 of the Constitution, which allows for direct intervention [by the national government] or the provincial department enters into a memorandum of understanding with the national department,” he said.

“Either way there must be an urgent resolution to these issues and any action should include a specific and detailed action plan. There have been encouraging noises from government last week but little of substance.”