Yemen president vows not to quit as protests spread 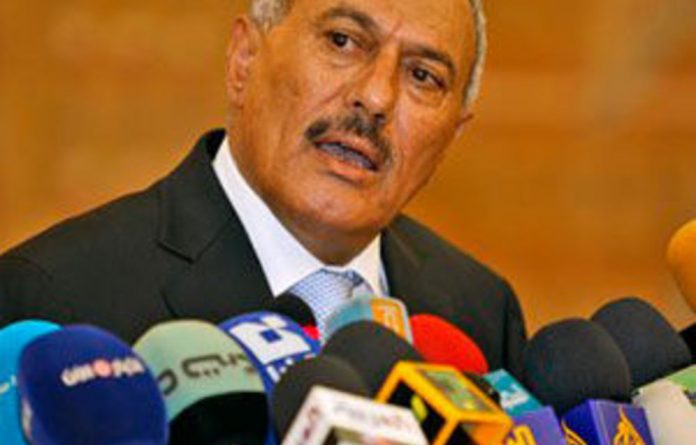 Yemeni President Ali Abdullah Saleh, in power since 1978, vowed on Monday not to quit under pressure from the street, as MPs joined thousands of protesters in Sana’a calling for his departure.

In the country’s south, police shot dead a protester in the regional capital Aden, bringing to 12 the number of people killed in protests that have raged there since February 16, according to an Agence France-Presse tally based on reports by medics. Dozens have been wounded.

Anti-regime protests also spread to the north of the country, with tens of thousands of Shi’ite Huthi rebels demonstrating on Monday in Saada to demand the ouster of Saleh, a local tribal leader said.

Saada is the stronghold of the rebels, who from 2004 fought six wars with Saleh’s government before signing a peace treaty in 2010.

“If they want me to quit, I will only leave through the ballot box,” Saleh told a news conference as the protesters, including opposition MPs, gathered outside Sana’a University.

“The opposition are raising the level of their demands, some of which are illicit,” the Yemeni leader said.

Great survivor
Saleh, whose long reign makes him one of the Middle East’s great survivors, said the protests were “not new”, accusing his opponents of having been behind the demonstrations for a while.

About a dozen opposition MPs, who vowed to take to the streets in a statement issued on Sunday, joined students who have been protesting for the past nine days.

Security forces surrounded the protesters as they gathered in a square near Sana’a university, which they have dubbed al-Huriya (Liberty Square), brandishing banners declaring: “People want change”, “People want to overthrow the regime” and “Leave!”

The protesters, who have set up tents at the square, vowed to stand firm despite Saleh having announced the formation of three committees to examine issues relating respectively to security, medical care and nutrition.

“The students will not leave unless either the president falls or they fall” dead, said one of the students, Muamar al-Haidari.

After Tunisia’s strongman, Zine al-Abidine Ben Ali, was toppled in an uprising, “we see the cards falling based on the people’s will. [Egypt’s president] Hosni Mubarak was toppled, now we are waiting for [Libya’s Moammar] Gadaffi and the Yemeni president will follow,” opposition MP Ahmed Saif Hashed told AFP.

Responding to Saleh’s calls earlier this month to resume dialogue, stalled since October, the parliamentary opposition had refrained from calling for protests.

But loyalists who are demonstrating in support of Saleh in al-Tahrir square in the centre of Sana’a have almost daily broken up students protests using batons and stones, with police also using violence that has left scores of demonstrators injured.

Incensed by the brutal attacks on protesters, the Common Forum, an alliance of parliamentary opposition groups, on Sunday came out with a statement urging its members “to join the protesting youths … in their demonstrations against oppression, tyranny and corruption”.

“After bloodshed and the fall of victims, and after the government has sent its thugs on to the streets … we insist that there is no dialogue with bullets and batons” and with a regime “that brings thugs to occupy public places and terrorise people”, the statement said.

Wounded
In the western port city of Al-Hudaydah, three protesters were wounded in clashes with the regime’s loyalists on Monday, demonstrators told AFP.

In Taez, south of Sana’a, protests continued for the 11th straight day on Monday as tens of thousands gathered in a square near the municipality building, some setting up tent.

Medics in Aden named the protester shot by police and who later died of his wounds in hospital Monday as Ali al-Khalaqi. Four other protesters were shot and wounded, one seriously, medics said.

Meanwhile, Yemeni clerics issued a statement on Monday prohibiting the use of force against protesters, which they described as a “crime”, and calling for a ban on arbitrary arrest and torture.

“Any act of beating or killing of protesters is a deliberate crime,” said the association of Yemeni clerics headed by Sheikh Abdul Majid Zindani.

Saleh has outlived the Cold War division, civil war and an al-Qaeda insurgency but is now scrambling to see his term through to the end as sustained popular uprisings in Sana’a and Aden test his grip on power. — AFP