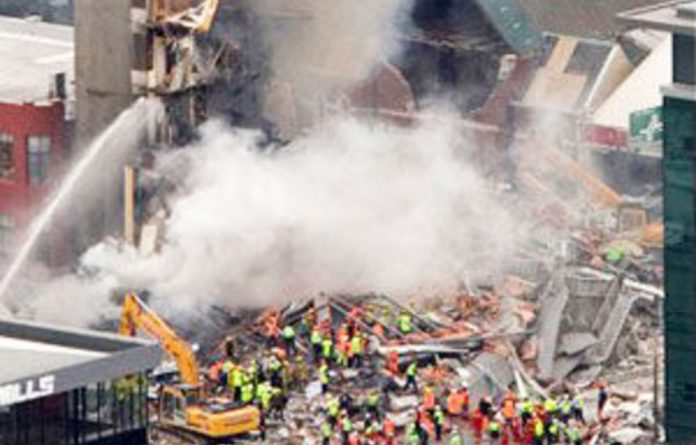 Helicopters and cranes plucked terrified survivors from quake-hit buildings in New Zealand on Tuesday, but many remained trapped as night fell on the stricken city of Christchurch.

About 500 police and military personnel scoured the wreckage for survivors after the 6,3-magnitude quake, which buckled roads and rained glass and rubble on streets packed with lunchtime shoppers.

As the scale of the tragedy that has claimed at least 65 lives emerged from the chaos engulfing New Zealand’s second city, rescuers worked through the night to free those entombed in devastated office buildings.

“They are going to come and get you down. Just keep away from the edge,” one woman yelled to a distraught colleague trapped on the top level of what had been a four-storey building, but which folded like a concertina.

Bleeding and trapped
Liz Cammock said she was in her office in the Canterbury TV building when the structure — which was later reduced to a smoking ruin after a fire broke out there — collapsed around her.

“It just came right down, I was buried under part of the ceiling and when I looked up I saw that we were on the road and people were looking at us,” she told TVNZ.

But for Anne Voss, bleeding and trapped under her desk in the city centre Pyne Gould building, the ordeal continued into Tuesday night as she heard her colleagues screaming out to be rescued.

“I have no idea what condition they’re in, but I can hear them at times yelling for help,” she told Australia’s Seven Network on her cellphone from the building.

“I’m sitting under a desk and the ceiling has collapsed on the desk. I’ve got no water or food, I know I’m bleeding. I can feel the ground is quite wet. I can’t see. I think they know I’m here. I keep knocking and shouting ‘help’.”

Voss said friends and family had been making regular phone calls to try to keep her spirits up.

Television footage showed some survivors being winched to safety by helicopter from the roof of the 17-storey Forsythe Barr building, where the internal staircase had collapsed.

‘It looked like a war zone’
Miranda Newbury was on the third floor of another city building when the quake hit, forcing her to make her way down through a crumbling staircase.

“The shaking started and the lights went out. It was a very scary three flights down in dark stairs with rubble falling off the inside walls,” she told TV1.

“I really thought my time was up. When I finally got outside, there was dust everywhere — it looked like a war zone. Very surreal.”

Authorities said emergency services were stretched in the quake’s immediate aftermath, when bystanders helped dug people from the debris and ferried the injured in cars to makeshift hospitals.

Key said rescue teams from Australia and the United States were also on their way and offers of help had poured in from Singapore, Israel and the European Union. — AFP