Kunene, the Lamborghini, the ‘hot girls’ and the fine 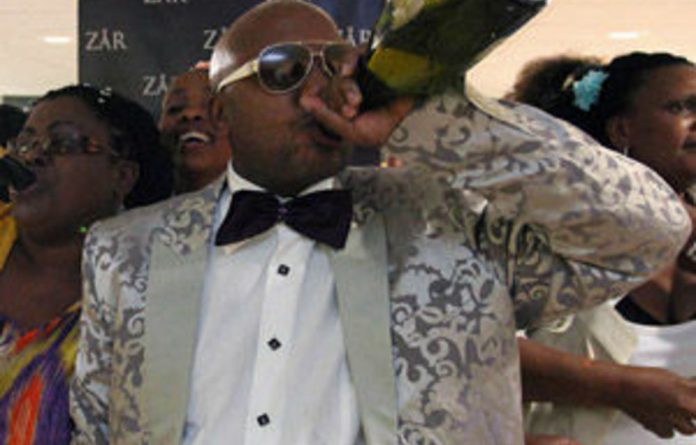 Sushi scoffer and fraud convict Kenny Kunene was bundled into the back of a police van outside his ZAR nightclub in Cape Town on Sunday night and then fined R200 — for overloading his luxury Lamborghini with “seriously hot white girls”.

When contacted by the Mail & Guardian, the bling-king protested that it was all because he had acted as a good Samaritan, saving “two young white girls” from a mugging.

“I was driving down Somerset Road [in Greenpoint, where ZAR is situated] in my Lamborghini when I saw these two young white girls struggling with a guy. I stopped to help them and got them both into my car and drove off. I was taking them to where they were going when the police stopped me,” said Kunene.

According to Kunene, police questioned him about his black Lamborghini not having a registration plate and about overloading the sleek two-seater sports car.

Said Kunene: “They also asked me if I was drunk and I told them that I was not. They insisted on taking me to the police station for a breathalyser test, but when we got to the station I was fined R200 for overloading. They didn’t test me for alcohol.”

Said one eyewitness, who asked not to be named: “He was roaring up and down for a while, making a lot of noise. When he was stopped by police, there must have been about 10 of them around the car: about five white cops and five coloured and black cops.”

Another witness confirmed that Kunene had been in the company of two “seriously hot white girls — they both looked pretty young. One was dressed in jeans, the other in a skimpy black number”.

Kunene, who has gained notoriety in recent months for his lavish lifestyle, which has included accumulating expensive sports cars and throwing bashes where guests devour sushi off the bodies of semi-naked women, was unabashed about the incident: “They called a guy to fetch them from where they were going. My only regret was that I didn’t get a chance to get their phone numbers. They were so beautiful.”

Kunene was also fined R500 for driving an unlicensed vehicle.

In the book, The Indian Africans, academic Kiru Naidoo explores the society of colonial Natal in the late 1800s to early 1900
Read more
Sport

The life of Diego Armando Maradona, who died this week, will always remind us that the smell of shit is as important as the perfume of flowers, writes Niren Tolsi
Read more
Opinion

But it can't solve the climate crisis, say a team of scientists
Read more
Advertising