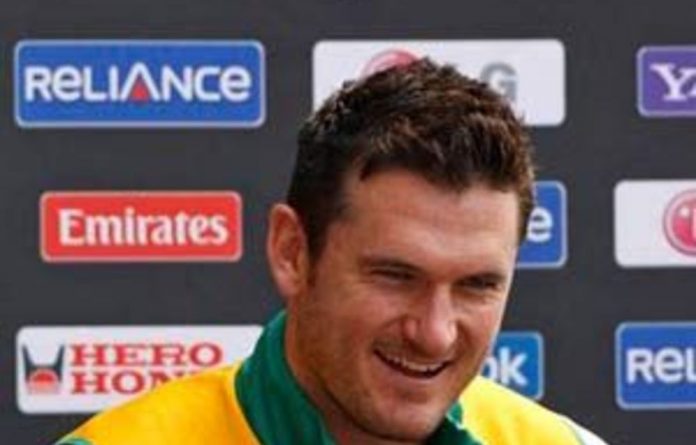 The depth in their batting and the variety of their bowling make South Africa one of the teams to fear at the World Cup and they will be looking to prove a point in their opening match against West Indies on Thursday.

The World Cup has been a curse for the African nation with heartbreaking semi-final exits in 1992, 1999 and 2007 and a shock quarter-final loss to West Indies in 1996, the last time the showpiece event was held on the sub-continent.

But this time round, South Africa are convinced they have turned up with a balanced side that can tame a West Indian outfit relying on the big-hitting duo of Chris Gayle and Kieron Pollard for the Group B encounter in New Delhi.

Captain Graeme Smith and Hashim Amla at the top provide South Africa with enough firepower to take advantage of the powerplays and the solidity of Jacques Kallis, AB de Villiers and JP Duminy make it a formidable batting order.

What South Africa lack is some lower order power-hitters which has to be overcome by the strength in their bowling.

In Dale Steyn and Morne Morkel, they have one of the most potent new ball attack and have no dearth of spin options either with off-spinner Johan Botha, left-arm spinner Robin Peterson and the Pakistan-born leg spinner Imran Tahir to choose from.

So they will not be dwelling on the past this time.

“The thing that has happened in the past is history. We’ve got an all-new side with a different look,” De Villiers, who will add the wicketkeeper’s role to his batting duties, said after arriving in India.

“ICC events are difficult things, you have to peak at the right time. It has nothing to do with choking or throwing a game away. It’s pressure and other teams may have played better that time.”

Near misses
Since making their World Cup debut in 1992, South Africa have suffered a series of near misses.

They were undone by an untimely rain delay at the end of their semi-final in 1992, a terrible run-out in 1999 and to top it all, they fell in the first round on home soil in 2003 following their own Duckworth-Lewis miscalculation.

As a result, many pundits have labelled the South Africans “chokers” and believe they lack the mental strength to lift the title.

“[In the] last two years, three maybe even, we played the big situations very well. We are going to do exactly the same in this tournament,” added De Villiers.

“We don’t need extra help or psychologists. We’ve got little things to work on but definitely it’s not about choking.”

But on Thursday, the South Africans will need to guard against the unpredictability of a West Indies side, who were ranked a lowly ninth in the ODI standings before the World Cup started.

Gayle can change equations on any given day with his destructive power hitting.

Relieved of captaincy duties, it will depend on the Jamaican to give West Indies a rollicking start and also contribute with his slow off-spinners.

Pollard will be another one to watch out for South Africa, as on his day the strongly-built Trinidadian can make any total look achievable with his immense power and astonishing bat speed.

If an experienced Ramnaresh Sarwan and Shivnarine Chanderpaul are able to add stability with the bat, West Indies have it in them to spring a surprise or two. — Reuters