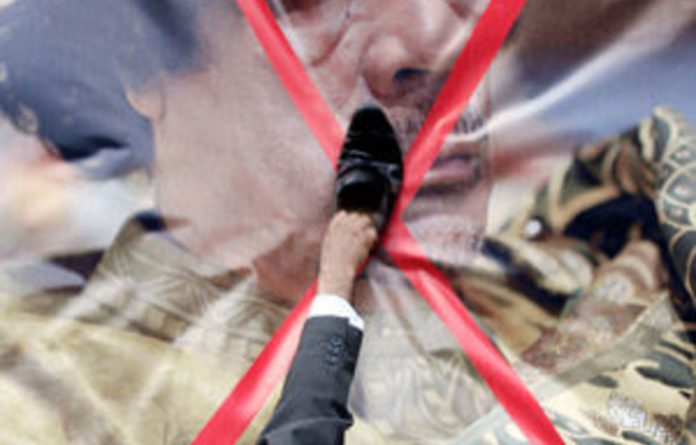 Eastern Libya was in full revolt on Thursday as veteran strongman Moammar Gadaffi made good his bloodcurdling vow to cling to power by any means, prompting a desperate expatriate exodus.

Thousands scrambled to flee what former colonial ruler Italy said was a “bloodbath” of hundreds of protesters in the oil-rich North African state, parts of which have fallen to opposition control and others into lawlessness.

United States President Barack Obama led international condemnation of the iron-fisted crackdown, demanding that the world speak as one to confront Gadaffi, in power for four decades and until recently slowly recovering from virtual pariah status in the West.

“There is no going back, even if we all die, at least children will not have to live with him,” a Gadaffi opponent said in eastern Libya.

Sustained gunfire
In Tripoli, sustained gunfire was heard in the eastern suburbs on Wednesday night. On Thursday morning, the streets of the capital were virtually deserted.

One of Gadaffi ‘s seven sons, Saadi, told Thursday’s Financial Times that after four decades in power, his father could retreat to a “big father” advisory role under a new government. But the 68-year-old Gadaffi himself is hardly talking of retreat, vowing in a fiery televised address on Tuesday to purge opponents “house by house” and “inch by inch”.

As senior generals and Gadaffi comrades from his 1969 coup have switched sides to join the revolt, his opponents appeared in control of Libya’s coastal east, from the Egyptian border through the cities of Tobruk and Benghazi, towns made famous as key World War II battlefields.

Journalists saw regime opponents — many of them armed — all along the highway that hugs the Mediterranean coast.

Deputy Foreign Minister Khaled Khaim said al-Qaeda had set up an Islamic emirate in Derna, between Tobruk and Benghazi, headed by a former Guantánamo Bay inmate.

But residents dismissed the reports as the Libyan government trying to “scare Europe”.

A statement posted in the name of al-Qaeda’s North African branch pledged support for the uprising but made no comment about any seizure of territory.

Acclaiming the successful anti-regime uprisings in Egypt and Tunisia, the group said it was time for the “impostor, sinful, hard-hearted bastard” Gadaffi to meet the same end, in a statement reported by US monitoring group Site.

Rising anger
Saudi King Abdullah, mindful of anger building in his own country, decreed an increase in social benefits as he returned to a Middle East rocked by anti-regime uprisings after three months abroad.

Abdullah, the 86-year-old monarch of the world’s leading oil exporter, was returning from back surgery in New York and recuperation in Morocco.

Elsewhere in the turbulent region, demonstrators in Yemen and Bahrain defiantly faced down teetering governments.

Undeterred by reports of carnage in Libya, Bahrainis vowed not to budge from the capital, Manama’s, Pearl Square, the heart of their protests, despite the release of leading Shi’ite opposition activists and renewed calls from King Hamad for talks.

Amid ominous signs of growing unrest in Jordan, the Islamist opposition said it planned to stage a “day of anger” with other parties on Friday to demand reforms.

‘Outrageous’
Obama, in his first televised comments on the Libya crisis, said he would send Secretary of State Hillary Clinton to Geneva for a meeting of the United Nations Human Rights Council and for talks with allied foreign ministers.

“The suffering and bloodshed is outrageous, and it is unacceptable,” he said at the White House. “This violence must stop.”

Clinton said Washington was consulting closely with its partners and “will look at all the possible options to try to bring an end to the violence”.

The European Union is drawing up sanctions against Libya that could include an assets freeze, a visa ban and legal prosecution for regime leaders, a diplomat said.

Oil hit two-year highs in Asian trade as markets fretted about an escalating crisis in the world’s key producing region.

New York’s main contract, light sweet crude for April delivery, rose 93 cents to $98,93 per barrel after passing the $100 mark for the first time since October 2008 on Wednesday.

Refugees
As international condemnation rained down on Gadaffi , European leaders braced for a coming tide of Libyan refugees across the Mediterranean sea.

Thousands of Libyans are heading to the country’s borders with Egypt and Tunisia to try to escape, a UN spokesperson said.

“The office is concerned about access to health services for the injured, a lack of medical supplies and the need for blood,” Nesirky told reporters.

“Partisans of the regime have attacked unarmed demonstrators with their machine guns and RPGs [rocket-propelled grenades],” a witness told Agence France-Presse (AFP) by telephone. Several people were “martyred” in the shootings, the witness said.

The first of thousands of foreigners fleeing Libya said Tripoli itself had turned into a war zone amid a merciless crackdown by Gadaffi’s forces.

Expatriate teacher Jane Macefield, arriving at London Gatwick Airport, told AFP she heard “20 blasts at least” from bombs or grenades and “the droning of planes” overhead as fighting raged late on Tuesday. — AFP

Even next to its luxury peers, the seven-seat behemoth is a little too much
Advertising